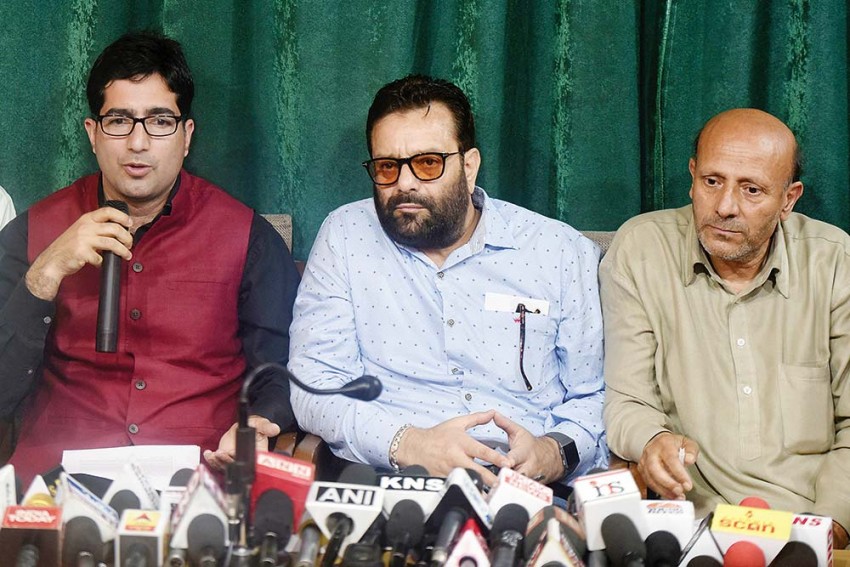 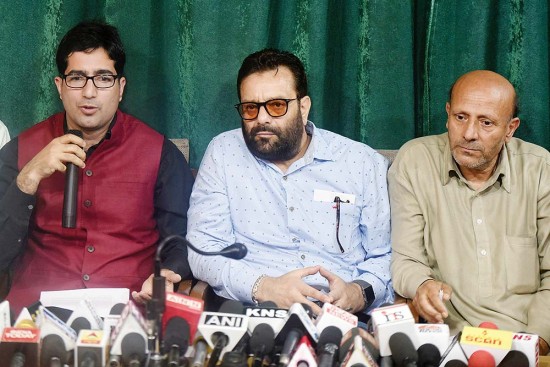 Since IAS-officer-turned-politician Shah Faesal entered into an alliance with former Kashmir legislator Engineer Rashid on June 18, the footfalls in the former bureaucrat’s office in Rajbagh have spiked. Some expatriate Kashmiris were also seen in the office. Some of them see fresh hope in the alliance called the Peoples United Front (PUF).

But the Valley’s political parties are skeptical. People’s Conference (PC) leader Imran Reza Ansari describes it as a “Sadbhavana Alliance in the making.” Sadbhavana refers to the Indian Army’s ‘operation goodwill’ to win the ‘hearts and minds’ in the restive State. Alluding to the alliance, National Con­ference spokesman Imran Nabi Dar says: “Since 1953, a constant effort is being made by the forces inimical to the state’s special status to scuttle a united Kashmiri voice by propping up ‘alternative’ fronts.”

Kashmiri intellectuals like Siddiq Wahid have also raised questions. Prof­essor Wahid asks if Faesal and Rashid see their party as an ‘alternative voice’, what alternatives have they articulated until now? “How is it different from the NC, Awami National Conference (ANC), the Peoples Democratic Party (PDP), the PC, the BJP and other parties? They all promise ‘development’, corruption-free governance and civic amenities. If this is what Shah Faesal is also offering, then what’s the need for another party? If his party is offering more, what is that offer?”

Prof. Wahid adds that just saying that they are representing the “sentiments of the people” won’t do. “By now, people’s sentiments are well known. They are, variously: dignified inclusiveness, maximum autonomy and independence. So, mere sentiments don’t need more representation. Can Shah Faesal, and any of the parties I mention, represent the frustration, distrust, anger of the people? Can they be distinctive from Delhi-based parties? Also, can they afford non-cooperation and non-alliance with Delhi-based parties? If so, then how do they articulate such representation?” says Wahid.

Rashid, a two-time ­legislator, and Faesal ­are serious contenders in Kashmir as the PDP’s decline has created a ­political vacuum.

While meeting delegations at his office in Rajbagh, Faesal is unfazed with the criticism of mainstream parties, but he takes seriously what intellectuals like Prof. Wahid have to say. “Whenever there is a new idea, it is challenged. When the NC was formed, it was accused of being a creation of forces outside Jammu and Kashmir. NC was seen as an extension of the communist party in Kashmir. PDP, formed in 1999, was also accused of being created by security agencies. The PDP was formed in a vacuum, people accepted it and welcomed it,” he says. “Those who describe us as the Sadbhavana alliance were first to ally with the BJP in the recent history of Kashmir. And everyone knows their other dealings,” Faesal adds.

In the parliamentary polls, Rashid, an independent candidate from north Kashmir, secured an impressive tally of 1,01,500 votes, just 31,192 votes behind the NC candidate. He got only 827 votes less than Sajad Gani Lone’s candidate. That makes Rashid—a two-time legislator—and Faesal serious contenders in Kashmir as the PDP’s decline has created political vacuum in the Valley.

Faesal believes that Rashid’s election performance has unnerved their opponents. He says that unlike the Jammu ­region, Kashmir Valley is fertile ground for new ideas and new pol­itical parties. According to him, people in Jammu have ignored their Dogra identity in favour of Hindu identity and have end­orsed the larger national narrative in favour of PM Narendra Modi. “While in Kashmir, pol­itical identities are still superior to religious identities. Politics is alive here and it is highly competitive. In Jammu, religious identity has wiped everything else, ­including ethnicities.”

Faesal feels it is necessary for Kashmiris to engage with New Delhi. “The BJP is talking about ruling India till 2047. We shouldn’t dismiss that assertion. The Nehruvian era lasted for many decades because it was the extension of the principles of India’s freedom struggle. Now, Hindutva is the assertion, and it’s not going away because there are elections to come. We need to engage with them while maintaining some distance from this Goliath,” he adds. Faesal has also clarified that despite his party being the antithesis of the NC and the PDP, it’s open to alliance if it is to save the special status of J&K.