Ground Check: AAP has reinvented government schools and made healthcare accessible. What is the common man saying on Arvind Kejriwal's popular policies? 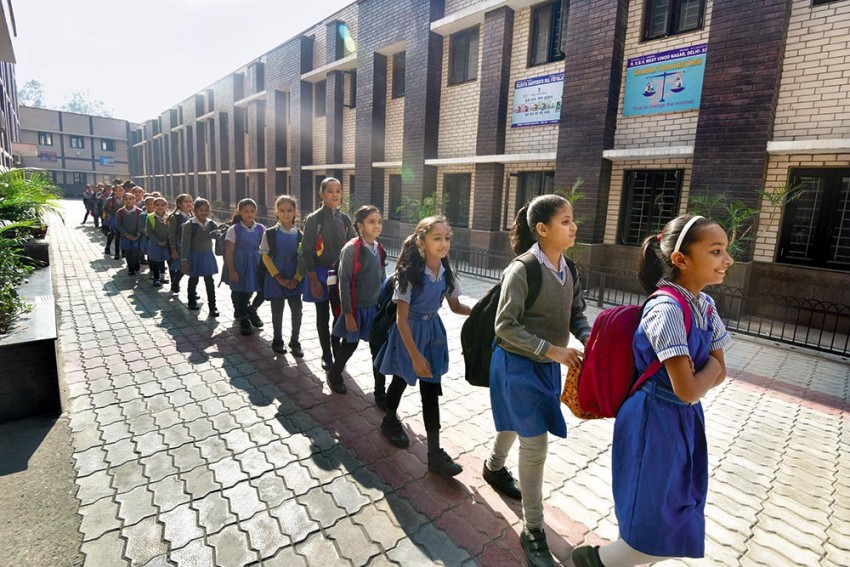 Naresh Gupta, 46, is basking with his son outside his house in south Delhi’s Govindpuri. A ribbon of sunlight cuts through the otherwise damp, cold lane, painting the duo yellow in its stride. “I’ll put him in the School of Excellence at Kalkaji when he grows older,” he says. “It is very good, I’ve heard.” The self-­employed insurance advisor is all praise for the state education minister: “I keep listening to [Manish] Sisodiaji’s videos on Facebook. He does what he says.” Gupta is equally effusive about the AAP government—the water and electricity subsidies help him save Rs 3,000-3,500 a month.

Reforms in the education sector have been the flagship of the government’s programmes. It allocated 35 per cent of its budget—an unprecedented figure—to education this year, introduced edgy subjects such as happiness and entrepreneurship, and reinvigorated teacher trainings. Schools now hold parent-­teacher meetings regularly. Some government schools have buildings and facilities that can give private schools a run for their money.

Sarvodaya Kanya Vidyalaya in West Vinod Nagar is one such school. A stroll through its corridors reveals smart classrooms, computers and art labs. Motivational quotes by Dalai Lama and B.R. Ambedkar greet visitors. Students’ artwork adorn most of the walls. The school was also one of the first to set up a swimming pool. Three years ago, however, things were rather different. Like many government schools in Delhi, it had a dilapidated structure, dirty walls and few chairs or desks. “The school was in a sad state when I joined in 2013.  Half the students used to sit on the floor,” says principal Manju Shami. “With the AAP government’s focus on infrastructure, it took two years to rebuild. Now students from private schools are joining here.” 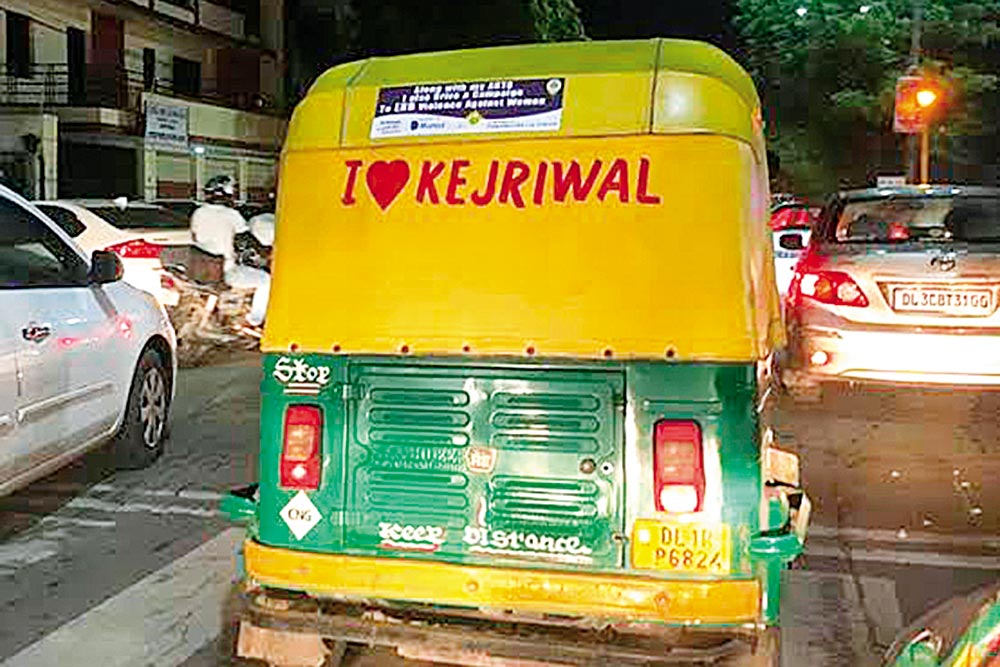 Seven lakh students from classes 9 to 12 are studying ‘entrepreneurship mindset’, wherein they are offered Rs 1,000 each as seed money. The Happiness Project, too, has caught the fancy of many. “The mindfulness we practise during the class helps me think with a calm mind. But 45 minutes can be a bit much,” says Sakshi, who studies in Class 7 at Sarvodaya and transferred from a private school recently. Another student, however, is not as enthusiastic: “Our class strength is 60. It needs to be cut down and we need more fans. In summer, it’s a torture.”

Raju, a student at a Khanpur school, vouches for the “improvement“. “Earlier, kids used to run out. Now, gates are shut during school hours and there are guards. Teachers come regularly and school is cleaner,” says the teen who is keen to cast his first vote in the assembly elections next year.

The government also introduced the much-touted Chunauti programme, which categorises students based on their learning levels. “It enables better learning and is aimed at bringing those lagging behind at par with others,” says Deepti Chawla, one of the 200 mentors appointed by the government to train teachers. Many educationists, however, criticise the programme, claiming it not only harms students’ self-esteem and stifles peer learning, but also erodes diversity. Critics also wonder whether the infrastructure upgrade will percolate down to the 1000-odd government schools in the city or remain limited to the 54 model schools selected by the government.

Healthcare is another thrust of the AAP government. An advocate of improving public services, it has allocated 14 per cent of the state budget to healthcare. It has also set up mohalla clinics—small units across Delhi to strengthen primary healthcare. They can conduct over 200 tests and have a doctor as well as qualified pharmacist. There are presently 374 operational mohalla clinics. 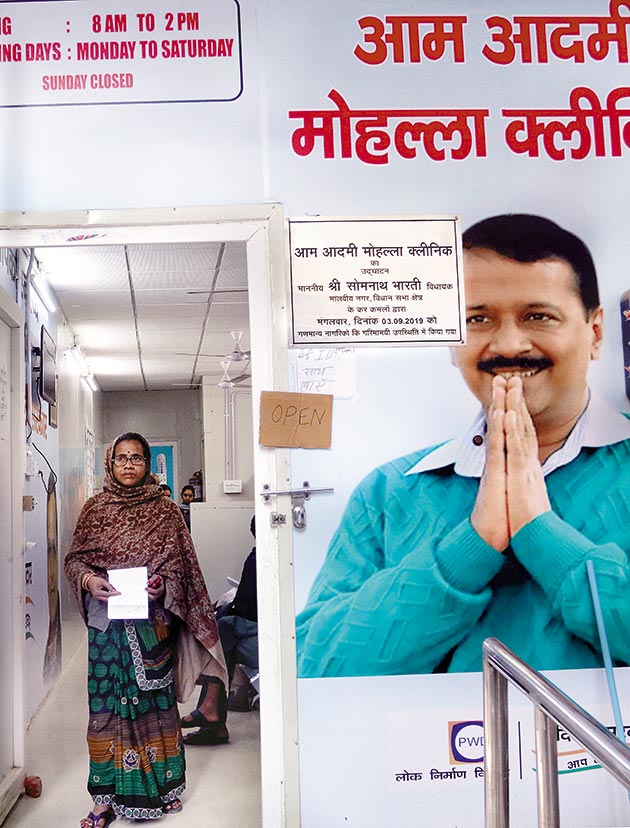 The benches at Arjun Nagar’s mohalla clinic are full. It looks neat and new. “Earlier, the waiting time at AIIMS or Safdarjung would tire you. An entire day would get wasted. But here, you get a consultation within an hour. The doctor listens to us, the staff is polite and medicines are free,” says 24-year-old delivery boy Mohan Joshi. He hopes that X-ray and ultrasound facilities will be added to the clinics soon.

Vimla, 50, has come to seek treatment for persistent body ache. “Every visit to a doctor would cost me Rs 200-300 earlier. Add an equal amount for medicines. I’m coming here for the fourth time and haven’t had to spend a penny,” she says. Ramesh Chamodia, 48, a resident of Ras Vihar, says the opening of a mohalla clinic in his neighbourhood saves him time and money. “We will vote for AAP because if we vote for anyone else, we fear they may close down the clinic,” he declares.

The schemes of the Delhi government have specifically benefited people from underprivileged sections of society. That might explain why seemingly every other autorickshaw driver proclaims their love for Kejriwal with bright red stickers.

However, there are dissenting voices too. Mangal Singh, a retired CPWD employee, says the clinic in Giri Nagar has not been functional since its inauguration last month. “What does inauguration mean? It means that work has been completed and the facility is up and running for public service,” says the irate sexagenarian. A worker at MLA Avtar Singh’s office, which is adjacent to the clinic, claims it will open in a week.

In west Delhi’s Chander Vihar, Harpreet Kaur, 36, says that Kejriwal does bina sar pair ka kaam. “He doesn’t work from start to finish. The sewer and water pipeline repair started, but stopped midway. The lanes are all dug up,” she fumes. Mangal Singh is also irate about street vendors’ encroachment of roads, which he thinks has gone up steeply under AAP. “Is sarkaar mein bakhaanbaazi zyada hai, kaam kam (This government is all talk, no action),” he declares.

Assembly Elections 2020: Does AAP Chief Arvind Kejriwal Have The X-Factor To Defend Delhi?