Home  »  Magazine  »  National  » Alias Is Impunity »  A Rape, Many Bodybags: Unnao Case Underscores Clout Powerful People Wield, And Damage They Can Do

After the Unnao girl alleged rape by the expelled BJP MLA Kuldeep Sengar, her father died in police custody, and uncle was jailed in a 19-year-old arms case. She is now battling for life after a road accident which also claimed lives of her two aunts. 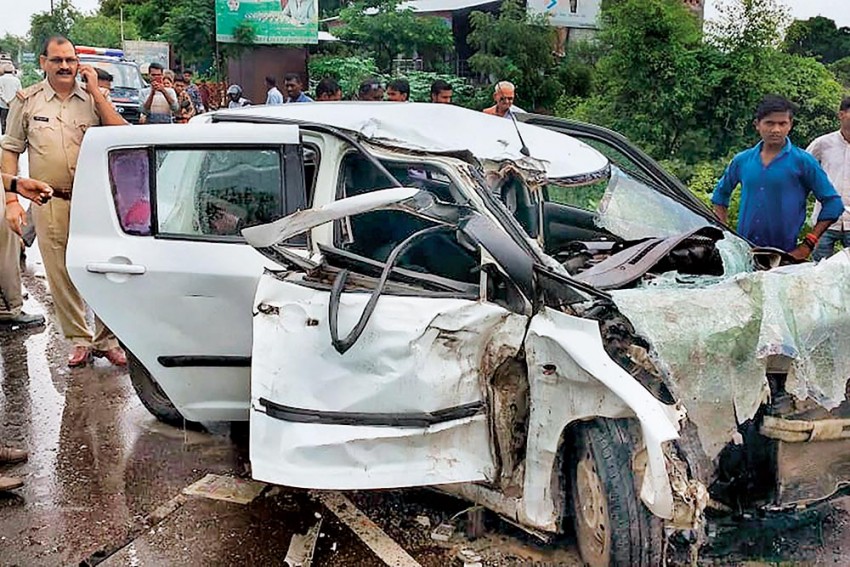 Tell-tale Signs
The mangled car of the rape survivor after it collided with a truck
Photograph by PTI
Salik Ahmad August 01, 2019 00:00 IST A Rape, Many Bodybags: Unnao Case Underscores Clout Powerful People Wield, And Damage They Can Do 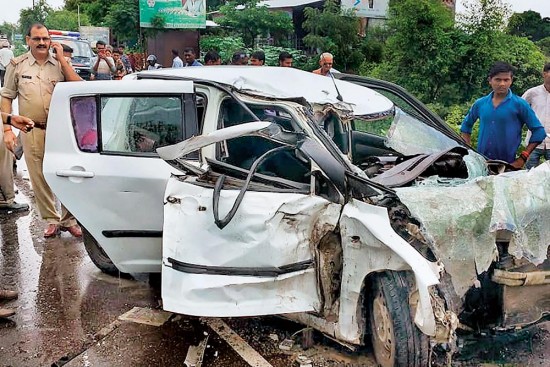 A girl from Unnao, Uttar Pradesh—in her teens, raped, and her family and well-wishers killed one by one like in a B-grade potboiler—beseeched everybody she could for justice. But there’s not a pittance of justice to be had, leaving a trail of questions instead. What must a human, living under the rule of law, do if they’re wronged? Approach police? Move court? Attempt self-immolation? Lament before the press? Write to the state’s top authority? Seek justice from the country’s top court? And what do the victim do if she draws a bad cheque from every door she knocked on? Perhaps, just send a curse from the pits of your being, hoping against hope that it will harm the perpetrator.

She was 17 two years ago and had gone to BJP legislator Kuldeep Singh Sengar’s home in the district seeking a job. The MLA allegedly raped her and she complained, sought justice. And then the domino effect, so typical to the badlands of UP, unfolded. Her father died in police custody—first assaulted by the MLA’s brother Atul Singh and his henchmen, and then allegedly tortured by police. Her uncle was jailed in a 19-year old arms case. Her two aunts died in a road accident, which also left her in a critical condition. She has wounds in the lungs, a blood clot in the head, and a fractured leg, says a kin. He alleges that the accident, and the preceding events, is part of a conspiracy by the MLA, who is now in jail, to silence the girl and her family.

“They are powerful people. Even after the accident, nobody from the village came to see the girl,” he says. “They (the MLA’s men) got a warrant issued against the girl’s father in an old case, forced him to come here, and got him killed.” 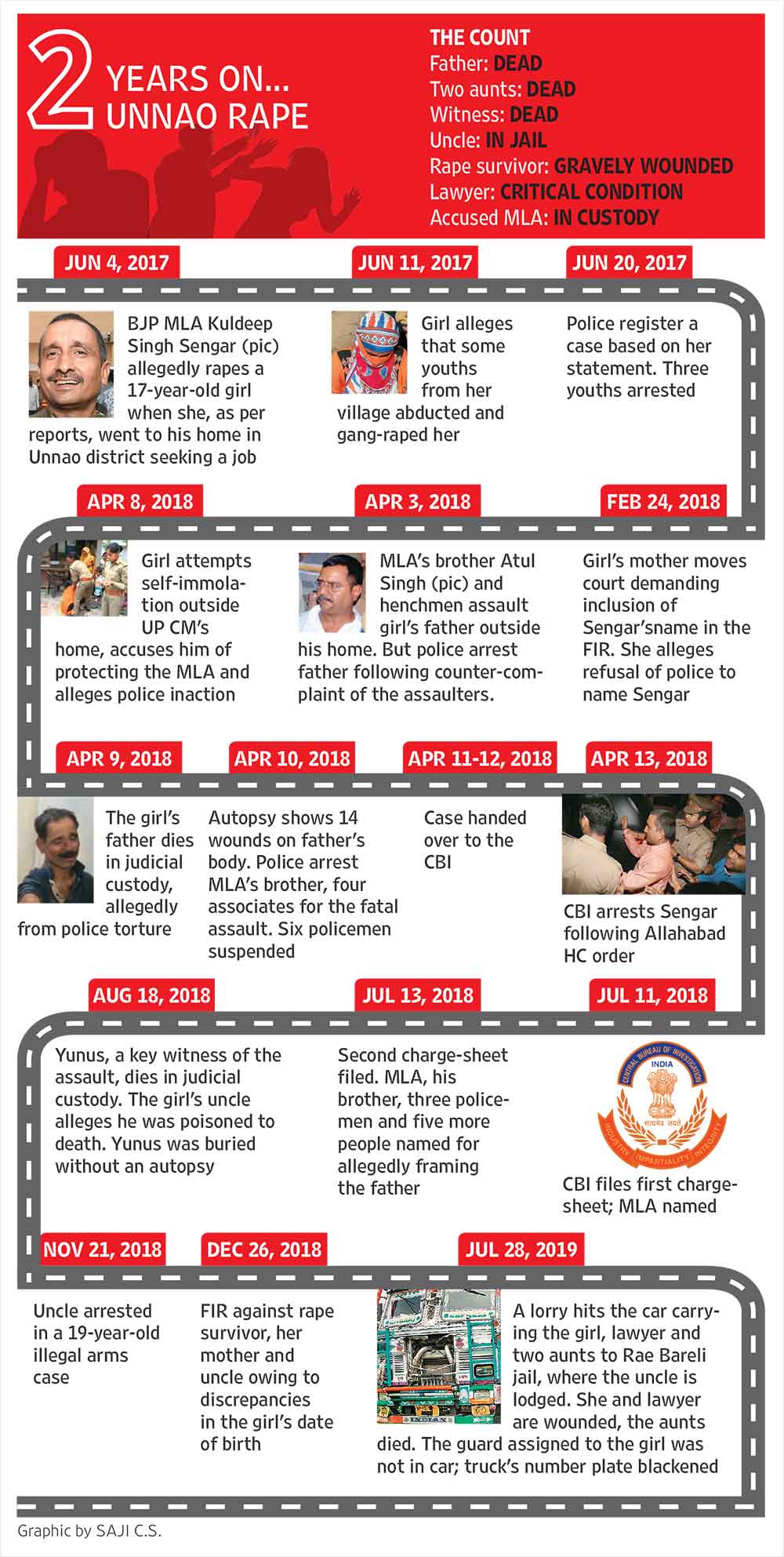 After the girl alleged rape, her family moved to Delhi fearing attack from his men. The father was summoned to Unnao in an old case and was attacked the day he landed. Police arrested the girl’s injured father—based on a complaint from the MLA’s men—and allegedly tortured him in custody. He died.

A kin says the accused are powerful, so no one from the village came to see her after the accident.

The girl’s uncle wasn’t spared either. The MLA used his clout to get him convicted in an old arms case, alleges the kin. “Thankfully, he was shifted to Rae Bareli jail. He would have been killed in Unnao jail,” he adds.

The girl, her lawyer, the jailed uncle’s wife, and the wife’s sister were on the way to meet the prisoner in Rae Bareli when a truck—driven on the wrong side and with its licence plate blackened—collided with their car. The two aunts died. The duo was running the jailed uncle’s business in his absence and ensuring two square meals for the family. “There is no source of income for the family now,” says the kin.

The recent events have pricked the nation’s conscience. Protests are being held, but not to the scale that engulfed the December 2012 gang-rape and murder in Delhi. That case forced lawmakers to come up with a stringent law against rape, the purpose of it mainly as a det­errent. But there are people who bel­ieve they are above the law, and for them such deterrence hardly matters. In fact, there have been instances of people trying to protect suspects. The Kathua rape and murder of a girl from a nomadic tribe in 2018 is an example. “It’s a typical case of collusion between criminal politicians and state machinery. The fact that all this happened despite the case being under media scanner shows the impunity, the brute power, and the control over the system these people enjoy,” says Kavita Srivastava, national secretary of the People’s Union for Civil Liberties. “You look at the sequence and you’ll know of the struggle the little girl endured.”

The accident bears oddities to perplex even the non-suspecting ones. Why was the truck’s number plate smudged with grease? Why was it being driven on the worng side of the road? Isn’t the truck owner from the MLA’s village? Why was the guard assigned to the girl not in the car? The police assert that the accident was not a planned act, a conspiracy.

With public outrage growing, the BJP has distanced itself from Sengar. The party said they suspended the MLA last year, but has not produced any proof of disciplinary action. It’s another matter that Sakshi Maharaj, the BJP MP for Unnao, visited the rape-accused MLA in jail after his victory in this year’s parliamentary elections, and thanked him for his support.