A Jab To Block An Uppercut

Vaccines are here, inoculation is ramped up...just when you thought happy days are here again, Covid barrels down. Can we stop it? 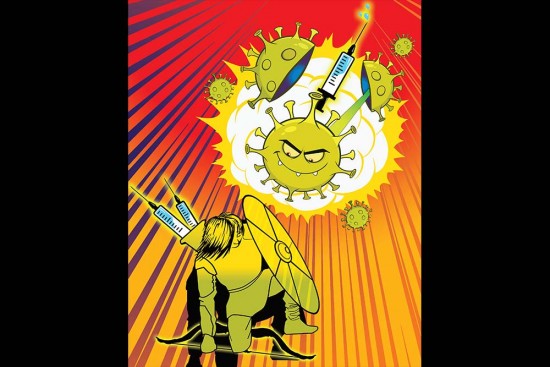 Round 2 Back in the middle of the ring, squaring off against an opponent whose moves are only too well known. That first round was gruelling. But it eased up a bit towards the end, enough to get off the ropes and spar—the defences had apparently worked. Now, however, the opponent’s punches are once again flying in fast, feet shuffling just as swiftly—in between ducking and parrying the blows, an unmistakable sense of déjà vu.

Haven’t we been through this fight before? Exactly a year after the word lockdown clanged down on everything that moved, there’s a COVID-19 resurgence in various regions in the country. Lockdown is still an option that nobody wants—but night curfews have made a comeback in Maharashtra;  protests, rallies and parties have been banned in Bangalore; and Delhi is keeping an eye on headcounts at open-air events. Tighter curbs because clusters of infection are popping up—in apartment complexes, hostels and workplaces. Here’s what the macro picture looks like—daily new cases climbed to 72,330 by the end of March, most of it coming from eight states. On the other side, around 430 districts haven’t reported a Covid case in the past 28 days.