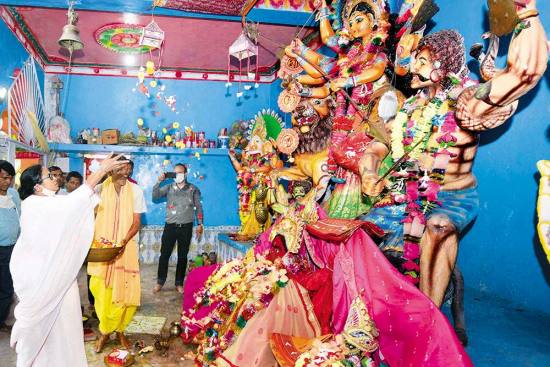 “Goons from Uttar Pradesh donning saffron clothes and chewing Pan Bahar are being sent here, and they are destro­ying our culture,” CM Mamata Banerjee told an election rally at Bishnupur in Bankura district on March 25. This came a month after her nephew and the TMC’s youth wing chief, Abhishek Banerjee, told a rally at Dholahaat in South 24-Parganas that “Uttar Pradesh’s gutkha spits would not rust Bengal’s iron”. The BJP’s Bengal president Dilip Ghosh alleged that the TMC chief had made a habit of insulting Hindus and all that Hindus respected. Meanwhile, the BJP and other RSS-affiliated organisations have intensified their campaign against “rising jehadi ­influence” in Bengal. “The coming ­assembly election is a battle to save our land,” Dilip Ghosh tweeted on February 27. “Illegal infiltration (of Muslims from Bangladesh) and the unchecked birth rate is changing the demography in the bordering areas. Jehadi activities are ­rising in tandem. Baduria, Basirhat and Kaliachak stand witness to it.”