Economist Haseeb A Drabu highlights the immense potential of the apple production in Kashmir. Orchard transformation and logistics management can increase production and earnings manifold 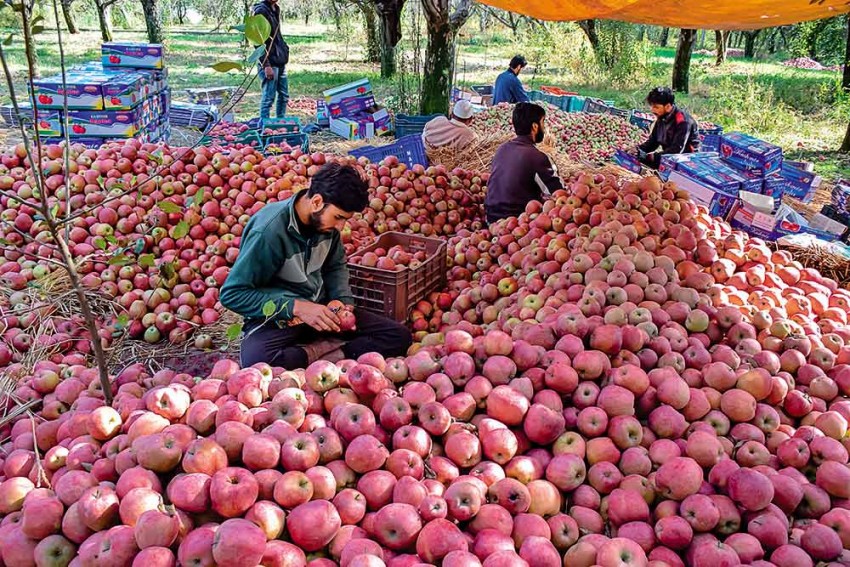 Good Earth
Kashmiri farmers sort their produce at an orchard in Pulwama
Photograph by Getty Images
Haseeb A. Drabu August 01, 2019 00:00 IST A $5 Trillion Economy By 2025? Why Kashmir Can Be The Apple Of India's Eye 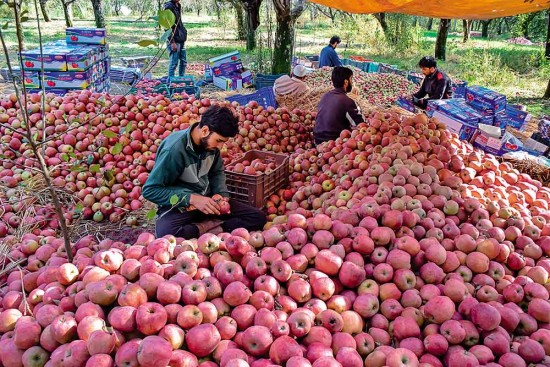 The prime minister’s target of a US $5 trillion economy is ambitious, not audacious. The seeds of this thought were planted in the PM’s mind by B.V.R. Subrahmanyam, the chief secretary of Jammu and Kashmir. So said the PM at a meeting in Srinagar on February 3, 2019. Apparently, it was in Davos that he told the PM that India will be a $3 trillion economy in 2020 and should aspire to be a “$5T” economy by 2024-25. It clicked. And the rest, as they say, will become history. If it is played right.

Normally, neither politicians nor policy-makers see state economies as principal actors in the gross domestic product (GDP) growth process. With GDP being a national macroeconomic statistic, the states and their contributions get subsumed. The fact is that the country’s GDP is—and is estimated as­—an aggregation of the state dom­estic product (SDP). Yet, when the GDP target and policies to achieve it are finalised, the potential of individual state economies is not really discussed. Indeed, states and state actors have to be the principal players, indeed drivers, in the $5T game. The Centre can provide the enabling conditions.

To give an example of how much one state can contribute let us look at the state which is not on the radar of growth and development of either economic policy-makers or the political leadership or even the public: Jammu and Kashmir. All that needs to be done in the state is to pick the low-hanging fruit, literally!

India is the fifth largest producer of apples in the world, even though its share in global apple production is just 3 per cent. More than two thirds of the national apple production comes from the Valley of Kashmir. Out of the 2.5 million metric tonnes grown nationally, about 2 million metric tonnes are grown in the Valley. Of the 0.31 million hectares under apple cultivation in the country, 0.16 million hectares are in the Kashmir Valley. Even though the Valley is less than 0.5 per cent of the total geographical area, it contributes 50 per cent of the country’s area under apple cultivation. Comparisons are even more striking. The tiny 2,400 sq km Valley of Kashmir has more area under apple cultivation than the world’s second largest producer of apples, the US, a 3,800,000 square km country.

The complete concentration of production and area under apple cultivation is matched only by a complete absence of infrastructure; only 0.3 per cent of national storage capacity is in the state. There are just 36 cold storages in J&K out of the 6,000 in the country. In addition to this, there is no logistics infrastructure. The move to set up a dry port, announced with much fanfare in the presence of the PM in Dubai in 2018, is still caught is some inexplicable bureaucratic maze. Despite such government apathy, for purposes of potential and policy, Kashmir Valley on its own, based on local entrepreneurial acumen, is the sixth largest producer of apples in the world.

So much about output. What about employment? As a rule of thumb, a one-hectare apple orchard generates 400 man-days of employment. At the current level of spread and production, the apple sector contributes 150 million man-days a year.

From Millions To Billions

J&K apple production contributes 10 per cent to the total state income of $20 billion. How does one grow the $2 billion apple economy to a $8 billion one by 2025? Rather simple: Increase the yield to global levels through orchard transformation and logistics management. The former will increase the quantity and the latter will improve the price realisation.

The idea is to ramp up and accelerate the high-density- and technology-intensive orchards plantation initiative envisaged in 2016. By converting a very conservative 10 per cent of the area of two million hectares from traditional to high-density orchards every year, half the total area under apple plantation will be under high density in five years. These 100,000 hectares of high-density orchards will produce four million tonnes, assuming an average yield per hectare of 40 metric tonnes. This will more than double the total apple production to 6 million metric tonnes. Presto! India becomes the world’s second-largest apple producer. The additional gains come from improvement in quality, reduced input (fertiliser, pesticides, and manpower) costs and low wastage. The decreased water usage by a factor of five is a huge gain for sustainable economic growth.

All these push the top line, making the apple economy far more profitable than ever before. With 93 per cent of the orchards being less than one hectare, income distribution is axi­omatically addressed. With nearly five lakh families engaged in this activity, the increase in incremental income is spread over nearly 25 lakh people.

For this environmentally-sustainable and equity-oriented growth model, the investment req­uired per hectare is around $70,000 or less than $10,000 per canal of land. On this investment, the returns, in investment banking terminology, will be a multi-bagger with a seven to eight fold inc­rease in the returns on investment. The state government had initiated the transformation by allocating $300,000 in the state budget of 2016-17. This can be increased five-fold without any real str­ess in expenditure management. It can come from marginal savings of other objectives. Alternatively, a 50:50 scheme with the orchardist’s contribution, as was done, should be expanded. It could even be converted in to a central scheme.

As a consequence, the state domestic product originating from horticulture will increase to $6.5 billion. With an estimated income multiplier of 1.5, in five years, the size of the apple economy will be $10 billion. This should power the total SDP of J&K from $18 billion today to 0.1 trillion in 2025. Today, J&K contributes 0.6 per cent of the nat­ional income; then it will contribute two per cent.  In the $100 billion horticulture economy of India, the apple model can be easily replicated for fruits across states to increase it to from the current levels of $60 billion of marketable surplus to over $300 billion over five years, making the $5 trillion journey a rather fruitful one.

More from Haseeb A. Drabu