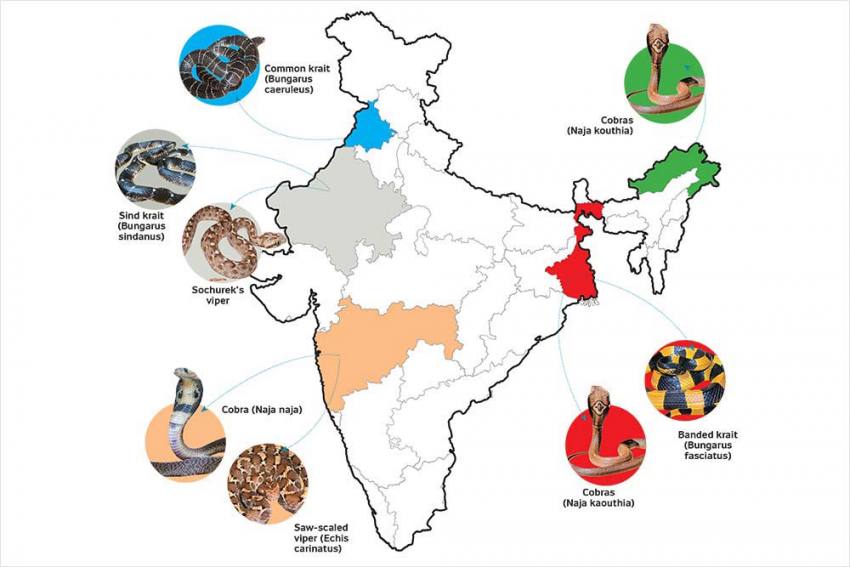 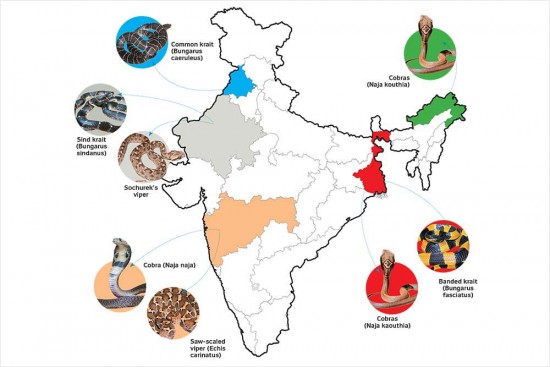 Snakebites—that ancient scourge that has carried away so many over millennia and spawned gods and goddesses to whom terrified Indians prayed for assuagement—have lost none of their venom. With an estimated 46,000 deaths in India and at least thrice as many people injured every year, snakebite has been a complex but neglected problem. Now, new research is showing why envenomation by snakebite needs to be tackled swiftly, and on a bigger scale.

In December, a paper from the Indian Institute of Science (IISc) evaluated the efficacy of commercially available polyvalent anti-venoms against a few snake species other than the ‘big four’—the spectacled cobra, the common krait, Russell’s viper, and the saw-scaled viper—and found that these lifesaving drugs could have serious deficiencies. By itself, the paper was only highlighting what experts had been pointing to for many years—the need to develop snake anti-venoms that can be more effective in dealing with the sheer biodiversity in India. Kartik Sunagar, assistant professor at IISc’s Centre for Ecological Sciences and author of the paper, points out that “no one had conclusively shown till today that anti-­venoms don’t work” against some neg­lected venomous snakes in India.

As Sunagar explains, Indian polyvalent anti-venoms are targeted at the big four which are believed to account for the bulk of snakebite casualties. But India can count up to 300 species of snakes, of which about 60 species could be medically important, meaning that their bite could cause a medical problem.

“In Rajasthan, there is the Sind Krait, which our study found is the most toxic snake in India,” says Sunagar, who heads the Evolutionary Venomics Lab at IISc. “I can say for sure that in the Northeast, the Big Four snakes do not cause such a problem but there are many other species that do. That’s why we need to figure out how we can address the regional differences in medically important snakes.” There is a lot of geographic variation in venoms, which means even different populations of the same species can have very different venom compositions, exp­lains Sunagar. In many countries, the problem isn’t so complex as in India, with its diversity of snake populations.

One approach, researchers say, is to manufacture serum from venom sourced from several regional centres—currently, most anti-venom manufacturers, except for the government-run Haffkine Institute in Mumbai, procure venom from the Irula Snake Catchers Industrial Cooperative Society in Chennai. Anti-venom manufactured using venom samples from one region may not be suitable to treat bites by the same species of snake from another reg­ion of the country, says Prof Ashis Mukherjee of Tezpur University. “In Northeast India and in eastern India, the most prevalent species is Naja kaouthia (monocled cobra) and not Naja naja (spectacled cobra). In 2002, we demonstrated that anti-venom against Naja naja is partially effective in treating Naja kaouthia envenomation.”

Sunagar’s study, for instance, obs­erved variations in the venom of two populations of the monocled cobra—while a sample from West Bengal was found to be highly neurotoxic (poisonous to the nervous system), samples obtained from Arunachal Pradesh were rich in cytotoxins (affecting cells and tissues).

The other approach is to develop next generation anti-venoms—currently, anti-venoms are made by collecting antibodies from horses which have been injected with diluted doses of snake venom. “We have different ways of addressing this problem. All of those are leading to recombinant [an organism whose genetic complement results from recombination] anti-­venoms that bind to specific toxins and neutralise them,” says Sunagar. “Venom is a cocktail of different toxins. It is not just one component, but not all of those components are medically important. So, the idea is to produce antibodies only against those, using recombinant technology on culture plates, like we do for vaccines.”

Sunagar’s lab at IISc is part of a global research consortium, Scientific Rese­arch Partnership for Neglected Tropi­cal Snakebite (SRPNTS), which is applying antibody discovery technologies to develop monoclonal antibodies—those made by identical immune cells—for snakebite treatment. “Recombinant anti-venoms will take a long time, but you can’t just wait until these come,” says Sunagar. “That’s why we need to set up regional collection centres to collect venom from not only the big four but also these other medically important snakes.”

But better anti-venoms are only a part of the challenge. Since snakebites happen more in rural areas, exp­erts say the focus equally needs to be on creating awareness, providing training to doctors and necessary medical equipment like ventilators. Sadanand Raut of Vignahar Medical Foundation says his hospital near Pune has successfully treated over 4,800 patients of snakebite in the past 10-15 years with zero per cent mortality.

“Even complications like renal failure in Russell’s viper bite are reduced. All that is because of administering anti-venom in time along with other medical emergency management,” Raut tells Outlook. He cites a 2017 study of 100 patients of Russell’s viper bite of whom 92 were brought to his hospital immediately and were treated with anti-venom and other emergency protocols. “None of these 92 patients went into renal failure and they recovered fully. However, eight patients who came very late, about six-ten hours and didn’t get proper doses of anti-venom, all developed renal failure and required dialysis. So, this is proven...good emergency management and anti-venom in proper doses red­uces mortality as well as morbidity.” However, he says there needs to be a solution to treat the necrosis (cell inj­ury) following snakebite.

Training doctors to handle snakebite victims, says Raut, is an essential step. “Many doctors don’t know the basic things...how to do CPR and shock management. Also, doctors are hesitant in treating snakebite patients. But that can be changed by properly training them.” Raut’s organisation is part of an Indian Council of Medical Research (ICMR) initiative to get actual statistics of snakebites in India, given that many cases don’t get reported.

Mukherjee, who is part of a snakebite task force committee recently constituted by ICMR and the ministry of family welfare to prepare a roadmap to tackle the problem, says the Department of Biotechnology and the Biotechnology Industry Research Assistance Council are supporting project proposals to dev­elop new generation anti-venoms and snakebite kits. “I am sure that in the next couple of years the snakebite treatment scenario will be improved significantly,” Mukherjee says. It’s time the virulent serpents met their match in a bold medical counter-stroke.