Home  »  Magazine  »  National  » Pen Prison »  28 Journalists Killed In India Since 2008: Is This The Index Of Press Freedom In One Of World's Largest Democracy?

28 Journalists Killed In India Since 2008: Is This The Index Of Press Freedom In One Of World's Largest Democracy?

In April 2019, India was ranked 140 out of 180 countries in the press freedom index released by Reporters without Borders. Increasingly, scribes are feeling the heat from overzealous administrations 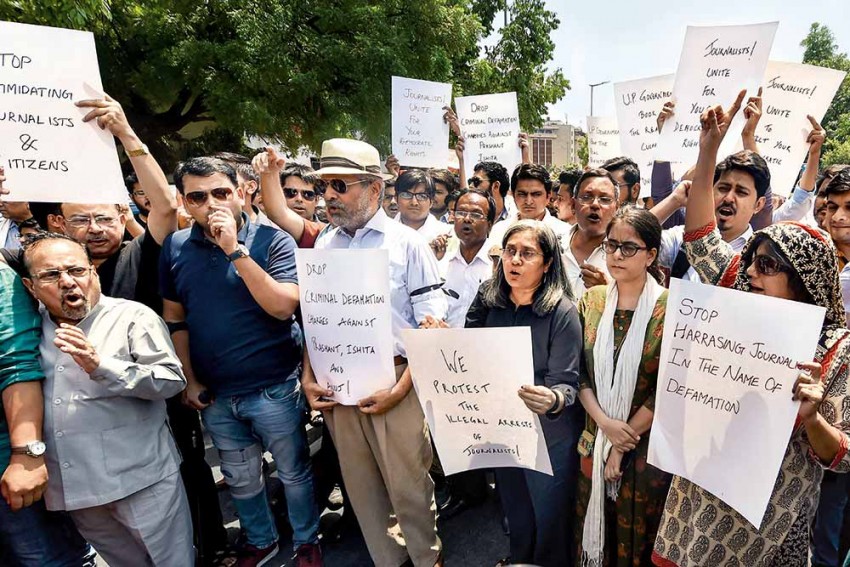 Hard Pressed
Protests against the ­arrest of ­journalist Prashant Kanojia
Photograph by PTI
Siddhartha Mishra June 19, 2019 00:00 IST 28 Journalists Killed In India Since 2008: Is This The Index Of Press Freedom In One Of World's Largest Democracy? 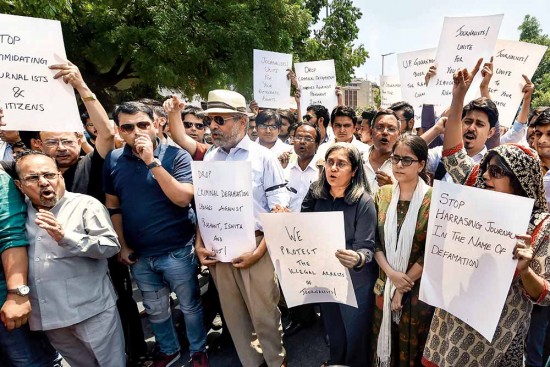 Dilip Kumar Sharma, a journalist in Mahasamund, Chhattisgarh, was unwell on the night of June 13 and had fallen asleep after taking medicines when, around midnight, his daughter Roli knocked on his door to tell him that three men were at the front door looking for him. Wearing only a vest and towel, Sharma reached his gallery to ask why he was being disturbed at this time in the night. “Thaane le jaa kar pooch taach karni hai (We have to take you to the police station for questioning),” one of them said.

It’s being alleged that after jumping a wall and seizing his phone, the cops took Sharma to the police station against his will, all the while abusing him and telling him that they were going to teach him a lesson. “Kalpana bhi nahi kar sakte the (I couldn’t have imagined)…,”he tells Outlook when asked if he had expected his reportage would lead to this chain of events. The report that irked the authorities so is quite straightforward: published on his website WebMorcha.com on June 8, the piece reports that close to 50 villages had faced a blackout for two days.

The alleged widespread power cut had made the state government lose its nerve even before Sharma’s report was noticed, when it got Mangelal Agarwal, a 53-year-old man, arrested on charges of ‘sedition’ for ‘spreading rumours’ on social media. CM Bhupendra Baghel, though, asked the police to withdraw the sedition charge.

Sharma was allegedly taken to police station against his will, the cops abusing him and telling him all the while that he would be taught a lesson.

“I’ve been working as a journalist for 20 years, have done stories against the BJP and the Congress, but in this case I really don’t know why they took so much umb­rage,” says Sharma. He adds that he hasn’t got a copy of the FIR in which he has been charged under IPC Section 505(1)(b), which mentions “intent to cause, or which is likely to cause, fear or alarm to the public, or to any section of the public whereby any person may be induced to commit an offence against the State or against public tranquillity.”

Sharma has rallied journalists around him after his arrest. He says that after they boycotted a government press conference on Monday, his complaint against police high-handedness has been registered. Outlook reached out to the police in Mahasamund, who are yet to respond.

The BJP too has reportedly questioned the Congress government in the state over the issue, saying press freedom is under threat. The irony, however, is hard to miss here. Recently, Prashant Kanojia, a Delhi-based journalist, was picked up by the Uttar Pradesh police from his home in the capital after he posted a news channel’s video taking a jibe at CM Yogi Adityanath on Twitter. Kanojia got respite only when a Supreme Court bench ordered his release on bail on June 13, the same day that Sharma was picked up in Chhattisgarh. “This order is passed in view of the excessiveness of the action taken (against Kanojia),” the bench had noted.

With Kanojia’s case, the crackdown on jounalists, which is more common a phenomenon for reporters operating from states, was brought to Delhi. Nation Live, the news channel that aired the clip—that Kanojia had relayed in his tweet—has also borne the brunt. Between June 6 and 8, UP police arrested three people from the channel on charges of defaming the CM, while PTI reported that its office in Noida had been sealed for operating without a licence. The PTI report had been denied in a video posted by the channel’s head Ajay Shah, apparently in hiding, on Facebook. Phone calls to the channel’s office have gone unanswered. 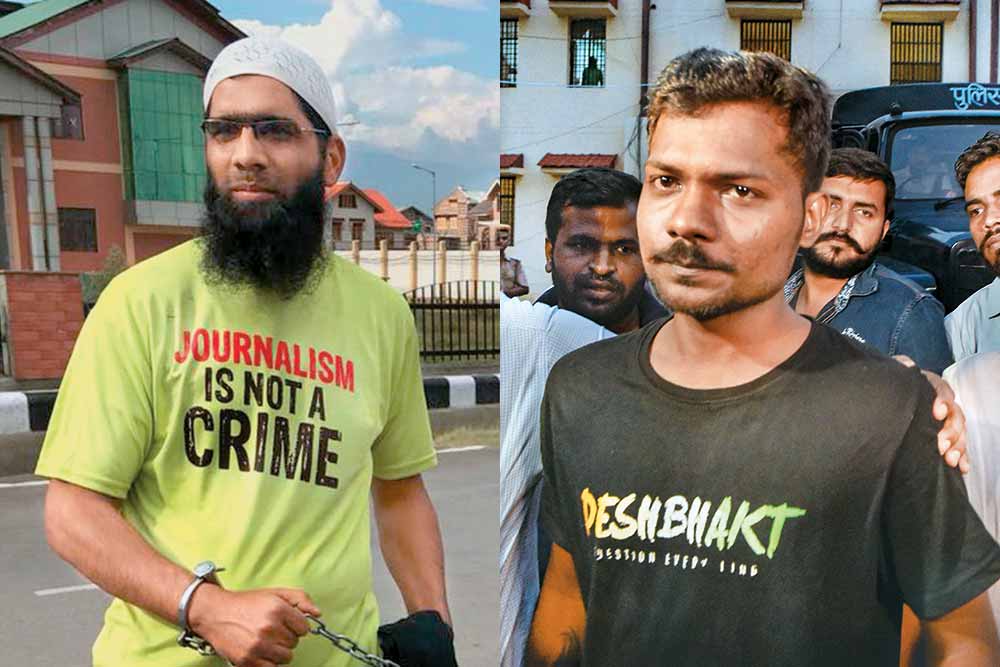 If a small media enterprise from Noida is easily muzzled, scribes in Kashmir can be shut down indefinitely. Aasif Sultan has been in jail since August 27, 2018. In 2018, Sultan had re-visited the story of Hizbul Mujahideen commander Burhan Wani in a piece titled ‘The Rise of Burhan’ for the magazine Kashmir Narrator. It was for this piece, says Showkat Motta, the magazine’s editor, that Sultan was picked up by the J&K police.

“I said this on the first day and I’ll say it again, these are cooked up charges bec­ause of his story and his journalism,” Motta tells Outlook. He says that it took Sultan three months to investigate the story. “It is a monthly magazine and, if you come out with something on Burhan after two years, it has to be an exclusive,” he says. The details of the article, according to Motta, led the police to believe that Sultan was “linked to militants”.

Sultan was picked up on charges of “criminal conspiracy” and “harbouring militants”. On June 1, a Kashmir court asked the police to record their statements in the case. “So far they have not come out with incriminating evidence. Where is it?” asks Motta. Out of the 10 witnesses in the case, “two are constables and, when the court issued summons last time, they did not appear,” he adds.

In April this year, India was ranked 140 out of 180 countries in the press freedom index released by Reporters without Borders.

Motta says the warning signs were there. On July 11, 2018, he received an e-mail titled ‘Publication of content glamourising terrorism in the state’ from an unverified e-mail id. The mail listed 10 qualms about the story. “They want the message to go out that he is not in jail because of his journalism, while the truth is that he is in jail only because of his journalism,” says Motta.

International press organisations have called for Sultan’s release and condemned the arrest. In April this year, India was ranked 140 out of 180 countries in the press freedom index released by Reporters Without Borders. According to data from the Committee to Protect Journalists, 28 journalists have been killed in India since 2008.

“When you’re offended and annoyed by a story, there is a legal course if you feel your image has been tarnished. There are sections under the law that do not ­include in their ambit direct police action. There are other enforcing agents or authorities,” says Vishweshwar Bhat, editor of Vishwavani, a Kannada daily.

Late last month, the Karnataka police filed an FIR charging Bhat with defamation, forgery, intimidation and breach of trust. On May 25, a day after the election results, his daily published a story saying that an inebriated Nikhil Kumaraswamy told off his grandfather H.D. Deve Gowda at a Mysore hotel, saying he did not do enough to ensure his victory.

According to him, the government bec­ame wary and did not arrest him after #EmergencyInKarnataka started trending on Twitter. “Otherwise they would have arrested me,” he says.

In Bhat’s case, as is in many cases ­including Kanojia’s, the person whose image has apparently been tarnished did not file the case. “The victim or affected party should file the complaint, not ­anyone else. Here, the JD(S) worker filed the complaint,” he adds.

After Kanojia’s arrest, the Editors Guild of India had released a statement condemning the act and asking for defamation to be decriminalised, a stand that Bhat supports too. However, it’s not just a defamation charge that journalists have to deal with, as Aasif’s case illustrates.