Shravan Krishnan wanted to be a cricketer but an injury scuppered his dreams. An expert snake catcher, he is Chennai's most sought-after man when animals are in distress 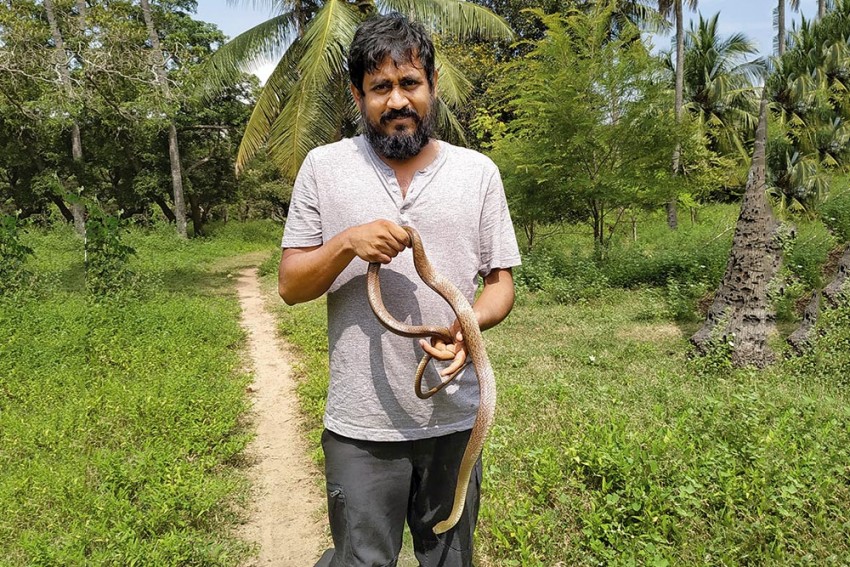 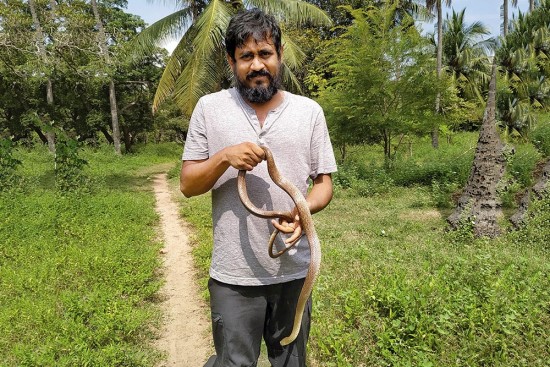 “Come let’s release this fellow in the bushes,” says Shravan as he led me into the forested tracts of the sprawling Theosophical Society campus in Chennai. After a short walk, he pulled out the wriggling rat snake—captured at 8 am in a housing colony—from a black cloth bag and handed it over to me to do the honour of setting it free. The snake slithered into the long grass and disappeared. “If it were a cobra, I would have released it in a more remote area—for the well-being of the snake as well as humans. But a rat snake, among the two dozen or so non-venomous species in and around Chennai, causes no harm,” he explains.

For nearly six years, 29-year-old Shravan Krishnan has been the go-to man in Chennai if a snake is spotted in a populated area. A bachelors in commerce, he nursed cricketing ambitions but gave up those after a back injury. He then trained under Rajesh, an ­expert reptile catcher of the forest ­department, travelled with him for over a year and ­observed how he caught snakes before taking up rescue missions. Initially, the forest department would beckon him on ­receiving calls on their rescue helpline—if Shravan were nearby, he would rush to the spot. Now that he is a well-known animal rescuer, people call him ­directly or get in touch through his wide circle of animal ­lovers on spotting a snake.

He is usually at his animal clinic in the campus from 10 am to 3 pm, that is, if he is not out rescuing creatures in distress. Today, he has organised a pick-up for stray dogs. Around noon, he oversees spaying operations and a cast for a fractured dog, and then ­collects donations and food for the ­animals. All around him are large four-legged creatures—a camel and a few old horses spending their last years in the complex’s green expanse.

“I do not kiss snakes or pose with them coiled around my neck. this is serious ­business.

After quaffing down his lunch, he heads to a school to conduct a session on animal rescue and precautions. “We first have to make sure what kind of snake it is before attempting to catch it. Since there are only four venomous species in and around Chennai, it is easy to rule them out if you have a trained eye. If it is a venomous snake, I need to approach it carefully in long boots and with a grab hook,” he ­explains. His extreme caution is the reason venomous snakes have never bitten him. Once he was alerted about a cobra hiding in an almirah and found three inside. “I closed the hatch first and then prodded one cobra after a­nother to come out before catching them,” he recalls.

Shravan makes sure to educate the public during his missions. If he spots a rat snake, he suggests residents to let it roam in their gardens as it is harmless, and keeps away cobras bec­ause they share the same territory and food. In the evenings, he usually has informal meetings with other animal lovers and groups of volunteers to discuss strategies and plan rescues.

Shravan insists that snake catching is serious business and does not resort to showmanship—trying to kiss the reptile or coiling it around his neck for formidable photographs—even though he has caught hundreds by now. “A Steve Irwin can do it on TV after years of ­experience. I do not want to ­embolden anyone to risk their lives by catching a snake and attempting to kiss it,” he declares.