Shivani Rajput, 27, leads the life of a bouncer. Normally a man's job, she checks for weapons and drugs at a bar at night and guards disputed land by day. She gets a paltry monthly salary of Rs 15,000 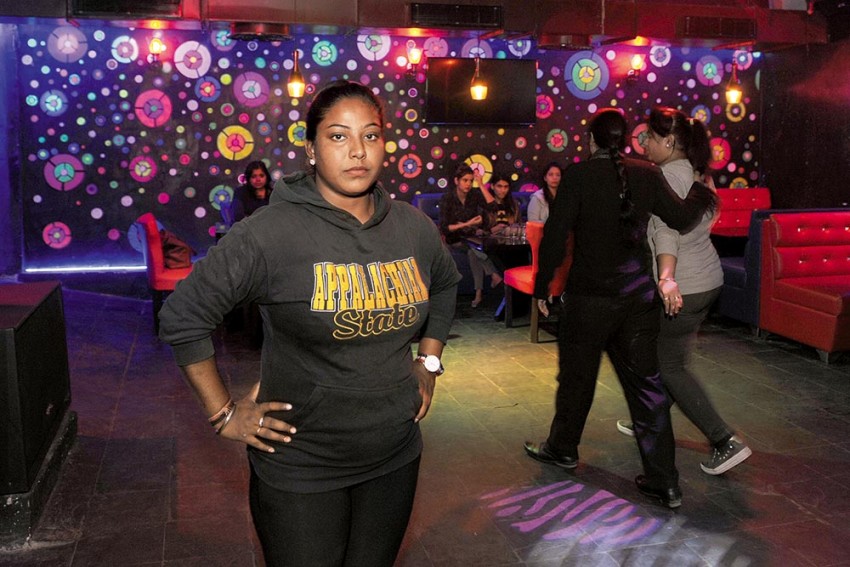 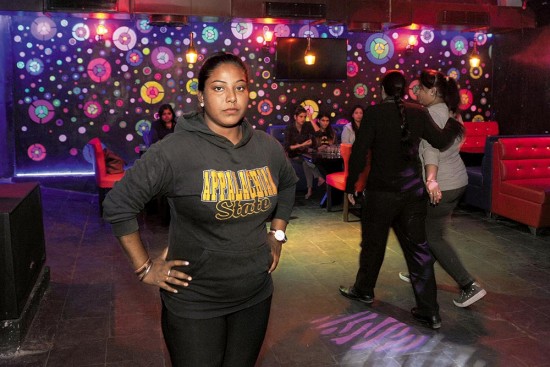 As the swish set of south Delhi crowd the serpentine lanes of Hauz Khas Village, Punjabi hits and techno tracks reverberate with the kaleidoscopic colours of the dance floor. In the crush of waif-like figures, flowy dresses and maquillage, 27-year-old Shivani Rajput stands out with her black uniform and exercised frame. It’s a Saturday evening, but she’s not here to party. Standing guard at the door, she frisks female customers, checks their purses for drugs and weapons, and strikes a conversation with ­familiar faces.

“Weekends are tiring, but I love this job,” she gushes. Shivani began working as a guard in a call centre at the age of 16. When she was offered a position as a bouncer at My Bar Head­quarters in Connaught Place, she was clueless about what it entailed, though she was confident she could ensure the wellbeing of customers. Five years later, she is proud of keeping her ­patrons safe.

Her day begins at 7 am with an hour-long workout session, after which she heads to her day job—a bouncer at a construction site on a ­disputed land. She works there till 5 pm and then goes to the club.

How does she feel about being one of the few women in an ­occupation considered a masculine preserve? “I don’t feel inferior to men,” she declares. “Women feel safe when we are around—they can party till late without feeling insecure. Even outside the club, I intervene if someone is in trouble. Protecting them makes me feel powerful,” she says.

How does society react to her offbeat job? “I get a lot of support from people,” she says.  Most of the residents at Tigri Colony are aware that she is the lone woman bouncer from the neighbourhood. Her mother, Pram Bhatti, takes pride in her ­accomplishments. “I tell everyone that my daughter takes care of other women,” beams the 47-year old, who runs a shop along with her husband in the locality.

Protecting women and controlling ­inebriated partygoers can be demanding. Shivani is mostly posted on the dance floor, where all the ‘action’ is. She keeps an eye on the revellers who try to misbehave with women. “I intervene if the situation goes out of control,” she says. It irks her that most women are scared to react when men do not respect their space.

In case of fights, ­resorting to the fist is her last option. “We intervene to ­de-escalate the situation. At first, we speak to the offenders softly and try to make them understand,” she explains. Though if the situation ­demands, Shivani can pack a punch. “Once a ­customer misbehaved with me without realising that I am a bouncer. I ­ignored him initially, but then my ­supervisor asked me to give it back to him,” she recounts.

While she is deft at putting such men in their place, there is an aspect of her job she wasn’t quite prepared for—being a counsellor for drunken women. “Some lock themselves in bathrooms and refuse to come out. Others cry and shout incessantly,” she says. “I try to calm them down. It works with most.” And when it doesn’t? “Some are rather aggressive and I have to drag them out.”

Shivani hardly gets six hours of sleep as her shift goes on till 1.30 am. Besides, she works seven days a week—a ­holiday means a pay cut. But the ­redeeming aspect of the job is equal pay: she draws a salary of Rs 15,000 a month, which is on a par with her male colleagues.

As she waits for an autorickshaw to return home, Shivani remains ­unfazed by the ­unsafe streets of Delhi. “This job makes me feel empowered. I can take care of ­myself,” she smiles.