Priyanka Behera is Odisha's first Flipkart delivery girl. She was once refused a job for being a woman. Her colleagues treat her like a 'sister' now 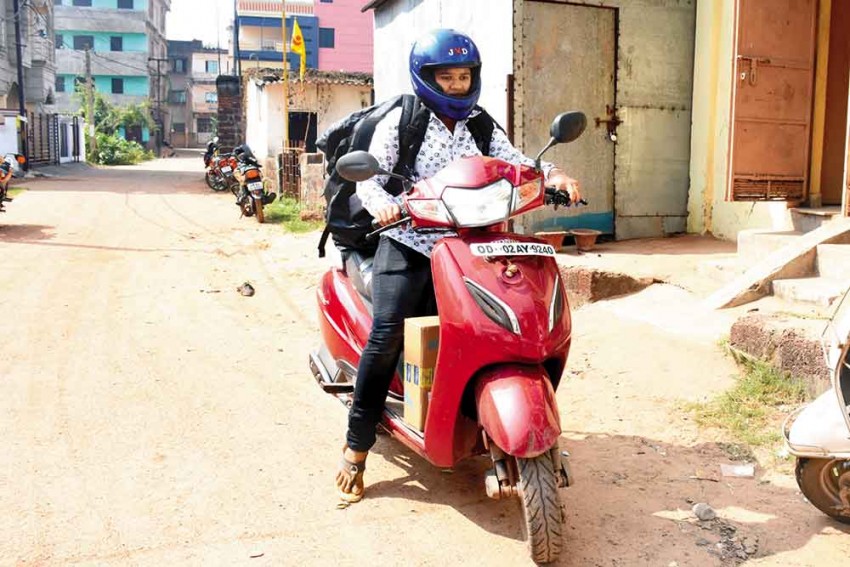 Photograph by Biswaranjan Mishra
Sandeep Sahu November 21, 2019 00:00 IST 24 Hours In Life Of Priyanka Behera: Of Courage And Precision, Delivering In A Man's World 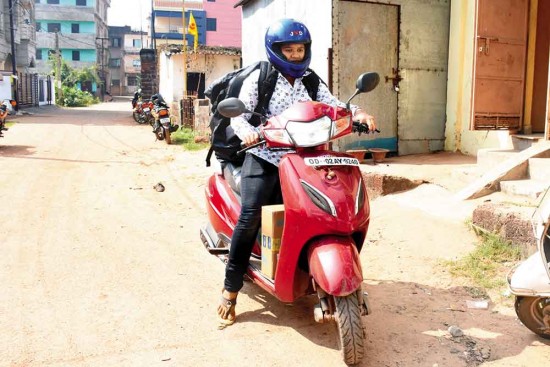 Priyanka Behera is an hour late for office today. “She had to go for a medical test first,” says her manager, Manoj Kumar Sahu, whom she calls ‘bhai’. She arrives at 10.30, signs the attendance register, takes a quick stock of the packets ­earmarked for her, gets the barcodes scanned by a colleague, packs them all into a large black bag and then sets off on her moped on her day’s errand, the bag on her shoulders.

Priyanka is Odisha’s first Flipkart delivery girl and perhaps the first delivery girl in the state in a trade that has long been a male bastion. It takes her a while—and a few calls on her mobile—for her to locate her first stop today. She delivers the packet at a shop on Canal Road near Rasulgarh in Bhubaneswar, takes the client’s digital signature and leaves for her next stop—a house in Friendship Colony.

“I salute her courage,” says the woman who takes the ­delivery. “When women are flying fighter jets today, why shouldn’t they take up ­delivery jobs too?”

With the festival season over, Priyanka has less ­packets to deliver—and that means less income as ­delivery girls are paid per packet (Rs 14 in her case). Today, she has just 12 and she says she would be back home by 3 pm, earning just Rs 168.

Just a month ago, when she had to deliver 50-60 packets a day, she would be rarely back before late in the evening. At the peak of the season, she used to make Rs 500-700 a day. On the rare days when there are no packets for her to deliver, she helps out with office work for Rs 300. Her husband, Ajit Kumar Biswal, also works for the same Flipkart franchise and earns a similar amount for similar work.

Life in Bhubaneswar has not been easy for Priyanka since she landed here with Ajit about a year ago from their village in Dhenkanal district after his family refused to accept her as his wife.

Priyanka, who is doing her ­graduation through a correspondence course, and Ajit, who is a matriculate, had to struggle hard to get a ­footing in the city. They got their first job with an Amazon franchise, but quit after a few months. Priyanka then approached ExpressBiz, but was curtly told that the company does not employ women.

Her search finally ended with a Flipkart frachisee in Bhubaneswar’s Saptasati Nagar. These days, the couple earns Rs 6,000-7,000 a month on an average.

“Priyanka is very good at her job and works as hard as anyone else,” says Manoj, adding that everyone in the office (14 delivery boys and some staff) treats Priyanka like his sister and goes out of the way to help her. When Priyanka’s landlord asked her to vacate the house, Manoj hosted the couple at his home till they got another accommodation. “I couldn’t have hoped for a more ­empathetic boss,” says Priyanka.

Ask her about her future and Priyanka is not sure if she would stay with her present employer or even the delivery trade. She says she would certainly strive for a better job. “I am ­two months pregnant and plan to work for another two-three months. After that, I will obviously take a long break from work. I will decide what to do next when I am in a position to work again.”