If the impressive victory of the Congress was surprising for the SAD-BJP combine, the AAP failed to surge ahead and instead saw its support base dwindle in the state.

If the impressive victory of the Congress was surprising for the SAD-BJP combine, the AAP failed to surge ahead and instead saw its support base dwindle in the state.

In a repeat of the 2014 general elections scenario, there was no pro-Narendra Modi wave in Punjab during the 2019 elections, unlike in most parts of the country. The parliamentary elections were held from April 11 to May 19 in seven phases and the results were announced on May 23, voting the Bharatiya Janta Party (BJP)-led government back to power at the Centre. In Punjab, however, Congress won eight out of the 13 parliamentary seats in the state.

The impressive victory of the Congress was surprising for the Shiromani Akali Dal (SAD)-BJP combine and the Aam Aadmi Party (AAP), as the party had improved its tally by winning three more seats compared to the 2014 poll outcome. Earlier, in 2017, the Congress had won the Gurdaspur seat in a by-poll necessitated by the untimely demise of the sitting Member of Parliament, Vinod Khanna.

The SAD-BJP alliance won four Lok Sabha seats and the AAP bagged one. Punjab went to polls on May 19, in the seventh and last phase of the 2019 Lok Sabha election. Punjab sends 13 MPs to Lok Sabha from Anandpur Sahib, Ferozpur, Khadoor Sahib, Hoshiarpur, Amritsar, Ludhiana, Fatehgarh Sahib, Gurdaspur, Bathinda, Sangrur, Patiala, Jalandhar and Faridkot. The state has over 2.07 crore eligible voters out of whom 65.96 per cent exercised their right to elect 13 MPs from 278 candidates.

The elections were considered important for the SAD after its worst-ever showing in the state assembly polls held in February 2017, when it could win only 16 assembly seats. The main reason attributed to the poor outcome in 2017 was allegations of the desecration of holy scriptures in 2015, when Akalis led the coalition government along with the BJP in the state. To put up a brave front, SAD president Sukhbir Badal contested the elections, even though the party had suffered a backlash from the electorate in the 2017 state elections. 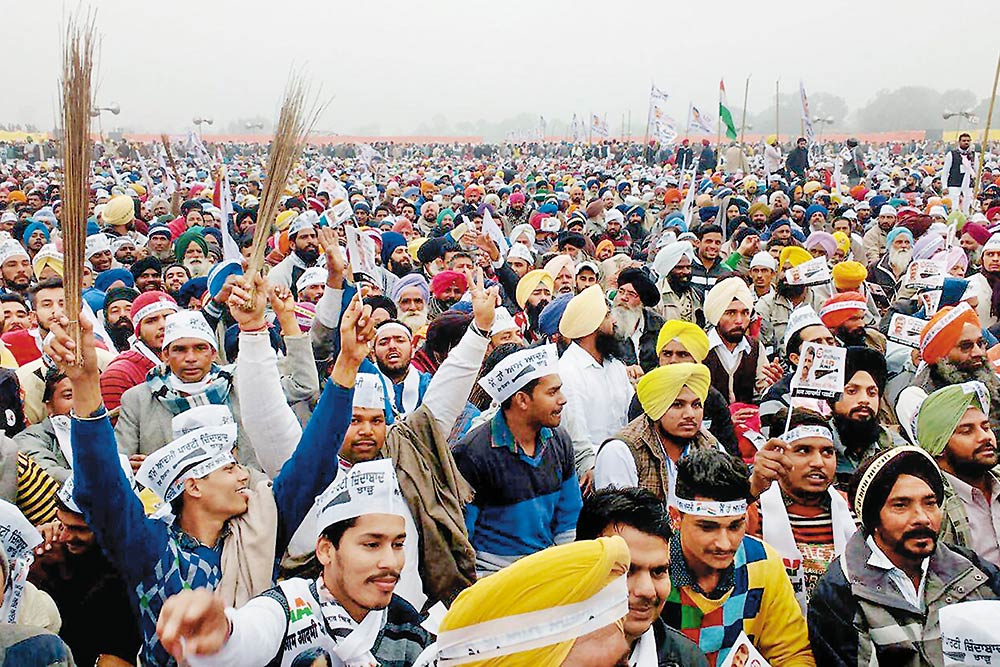 Election rallies of AAP and SAD, both of which fared badly in the 2019 parliamentary election

Factionalism hit the Congress party, which had formed the government in the state two years back riding on a wave of popularity after promising farm debt waiver. This was one of the several lofty promises the Congress had made to the people ahead of the 2017 state polls. The opposition had, however, levelled allegations against the Congress, claiming that the state government was betraying the people, particularly the peasants, as it had filled the warehouses with food grains, accumulating 50 per cent of the country’s total requirement.

The opposition parties, particularly the SAD-BJP combine, harped on the ‘Modi-factor’ to garner votes. The alliance also highlighted factionalism in the state involving the top leadership. In an attempt to overcome the negativity of 2014 polls, the SAD fielded its senior and experienced leaders in the election fray. 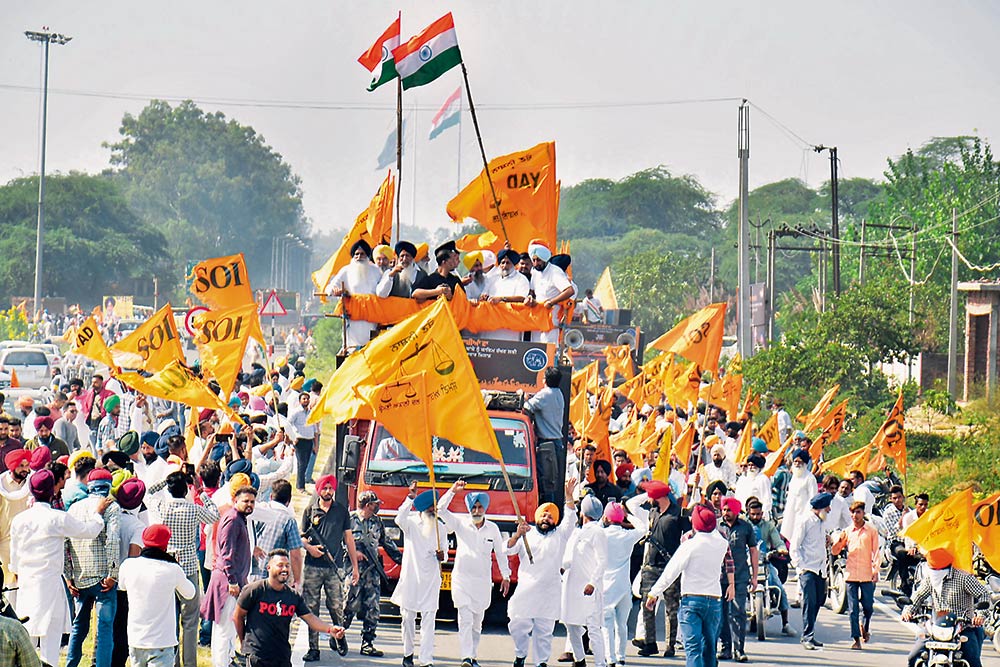 The AAP, which had won four Lok Sabha seats in 2014, had hoped to repeat its performance but could win only one seat in 2019. Comedian-turned-politician Bhagwant Mann proved the best bet for the party as, due to a spate of defections, many AAP leaders had quit.

The 2019 polls saw three former union ministers - Preneet Kaur and Manish Tewari of the Congress and Harsimrat Kaur Badal of SAD – entering the fray. Bollywood actor Sunny Deol was one of the five candidates who contested the Lok Sabha election for the first time. Other than Deol, the BJP also fielded former diplomat Hardeep Singh Puri. He contested from Amritsar, the Sikh seat of power, but lost to Congress party’s local Sikh face. Among other top losers were Punjab Congress chief Sunil Jakhar, Amrinder Singh Raja Warring (Congress), and former AAP leader Dr. Dharamveera Gandhi, who lost the election to Preneet Kaur.

The vote share of the ruling Congress in Punjab jumped to 40 per cent in the polls as against 33.10 per cent in 2014. In the 2017 state polls, the Congress had registered a thumping victory by winning 77 assembly constituencies out of the total 117 seats in the state assembly.

The vote share of the SAD, an important regional player in Punjab, increased to 27.45 per cent as against 26.30 per cent in 2014. This was encouraging, although the party won only two parliament seats: Ferozpur seat was won by SAD president Sukhbir Singh Badal, and the Bathinda seat by his wife Harsimrat Kaur Badal, who was re-contesting from the Lok Sabha seat. SAD had contested ten seats in alliance with the BJP, which fielded candidates from the remaining three seats.

Mayawati-led Bahujan Samaj Party also surprised everyone by getting 3.49 per cent out of the total votes polled during the elections, though the party failed to register victory in any of the three seats it contested – Anandpur Sahib, Hoshiarpur and Jalandhar constituencies. In all, the party got one lakh votes.

The BJP not only increased its vote share from 8.7 per cent in 2014 to 9.57 per cent this time but, by winning the Gurdaspur and Hoshiarpur seats, it also regained some ground. In the 2017 assembly polls, the BJP’s vote share had shrunk to a mere 5.3 per cent and it could win only three seats of the total 23 it contested in the state. This time, the party not only took significant leads in 14 assembly segments but also fared reasonably well in several urban areas. 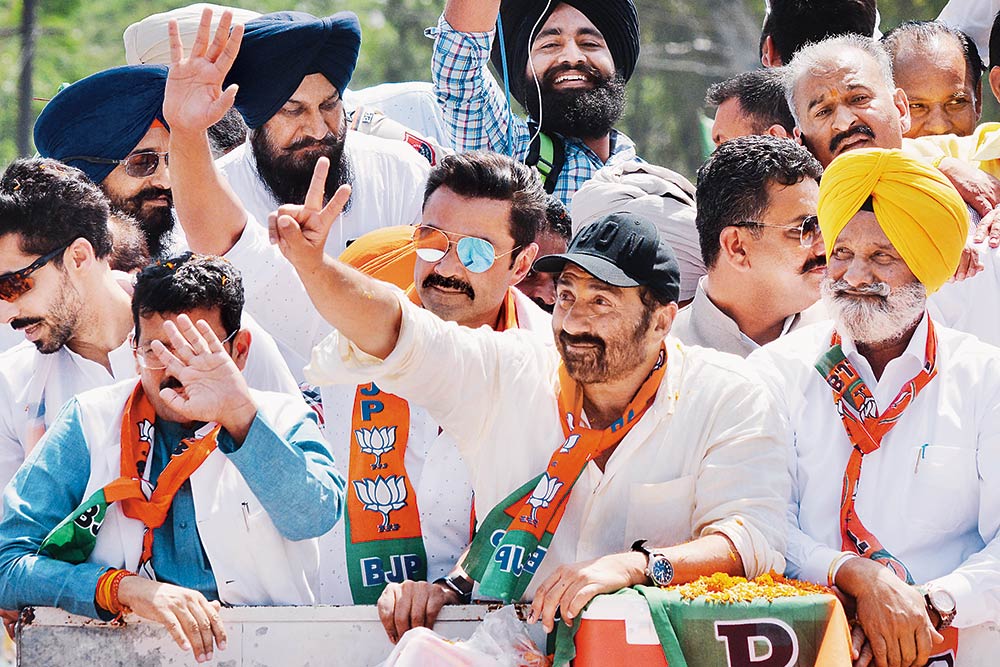 In Gurdaspur, the BJP candidate and Bollywood star, Sunny Deol defeated Sunil Jakhar of the Congress party with a margin of 82,459 votes.

Bollywood actor Sunny Deol was fielded by the BJP in Gurdaspur with much fanfare to boost its poll prospects against the incumbent, MP Sunil Jakhar of the Congress. Jakhar got 4,76,260 votes, while Deol got 5,58,719 votes. Their AAP opponent Peter Masih got only 27,744 votes.

In the past also, Gurdaspur used to be the constituency of another actor-turned-politician, Vinod Khanna, who won the seat four times – in 1998, 1999, 2004 and 2014. He died in 2017, leaving the seat vacant. Jakhar had won the seat in the subsequent by-poll. Vinod Khanna’s wife Kavita Khanna was keen to contest and take forward her husband’s legacy but was denied the opportunity by BJP.

Adding spice to the poll campaign, the Congress alleged that BJP had pressurised Deol to contest the polls by threatening to conduct income tax raids on him. It also alleged that given the reluctance of Deol to contest the election, he was bound to run back to Mumbai, which would defeat the purpose of the election as the voters expected their representatives to make useful contributions in Parliament.