The changed electoral map for the state Assembly was among the many reasons that led to surprising outcomes for contesting parties and contestants. For the ruling coalition, which was expecting a victory, the higher margin was a good surprise but for the Congress the outcome was a shock.

The changed electoral map for the state Assembly was among the many reasons that led to surprising outcomes for contesting parties and contestants. For the ruling coalition, which was expecting a victory, the higher margin was a good surprise but for the Congress the outcome was a shock.

The ruling Shiromani Akali Dal (SAD)–Bharatiya Janata party (BJP) combine led by Akali patriarch Parkash Singh Badal won the Punjab Legislative ssembly election for the second consecutive term in 2012 with a bigger margin. The results of the election held on January 30 to elect 117 members to the Punjab Legislative Assembly, announced on March 6, sprang a surprise for the contesting parties. For the coalition, which was expecting a victory, the higher margin was a good surprise but for the Congress the outcome was a shock.

The most interesting aspect of the 2012 assembly election was that two closest politicians and cousins, Sukhbir Singh Badal and Manpreet Singh Badal - who had learnt lessons in politics from Parkash Singh Badal, the patriarch of Badal family and SAD - were poised against each other.

The election also witnessed a major political shift - the rise of Sukhbir Singh Badal, under whose tactical command the polls were contested, and the rise and fall of Manpreet Singh Badal, who had founded the People’s Party of Punjab, resigning from the SAD.

Pertinently, Badal senior, though he became the chief minister for the second time after 2012 elections, had left major decision making to Sukhbir Singh Badal ahead of the polls. This included strategizing for the polls and leading the party campaign.

Punjab had been a witness to transfer of power between the two major political parties, the SAD and the Congress in the assembly elections held every five years, but the 2012 election outcome was different as the ruling party came back to power.

It was the first time after the re-organisation of Punjab in 1966 that an incumbent party had been voted back to power, that too very credibly.

The SAD won 56 seats out of the 94 it contested, reaching close to 50 per cent out of the total 117 state assembly seats, while its coalition partner BJP won 12 of the 23 seats it contested under the seat sharing arrangement under the alliance.

The political verdict was a shock for the Congress party as it not only failed to win the majority to form the government, but also witnessed a dip in voters’ support. Though the party contested all 117 assembly seats, it bagged only 46 seats. Though Manpreet Badal campaigned with much fanfare and gathered huge crowds, all this failed to translate into electoral victory. Three seats were taken by the independent candidates. 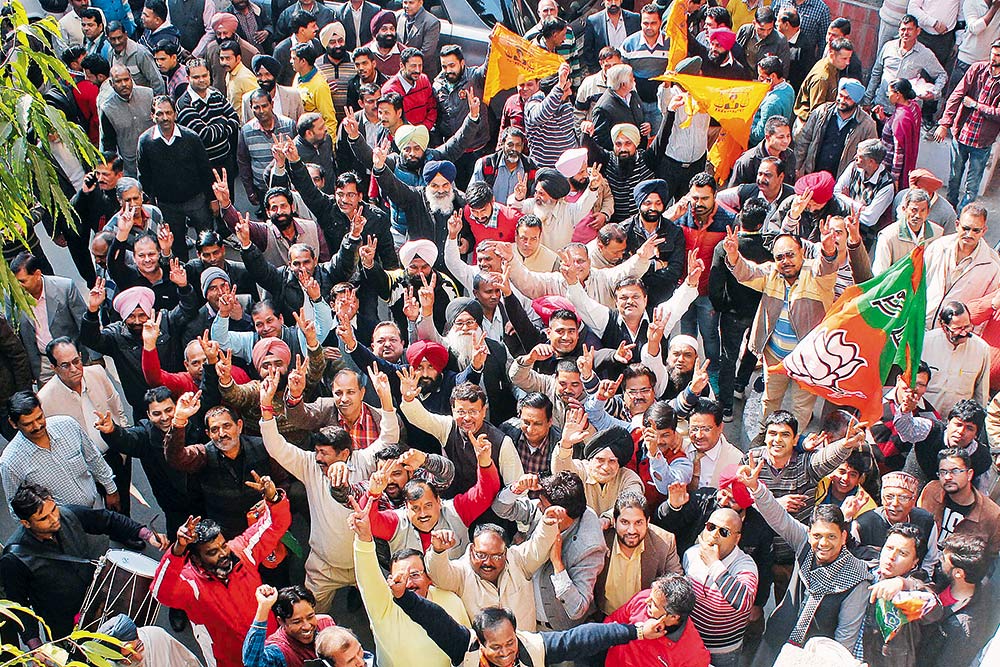 Akali Dal and BJP workers jubilating over their victory

Though the SAD-BJP coalition tally witnessed an increase of one seat and the Congress score rose by two seats as compared to the state polls in 2007, the vote percentage polled by both the opponents witnessed a dip. The SAD-BJP coalition polled 41.91 per cent votes, which was 3.46 per cent less than in the previous state polls, while Congress vote share was 40.09 per cent, which was 0.81 per cent less than in 2007.

Ashutosh Kumar of Panjab University wrote in a report that the intensity of the campaign and major electoral upsets that marked the 2012 Assembly elections can be attributed to the fact that Punjab, like the states of Andhra Pradesh, Karnataka and Maharashtra, had witnessed major territorial changes in the constituencies’ profiles due to the fourth delimitation exercise undertaken in 2008 by the Delimitation Commission headed by Justice Kuldeep Singh. The changed electoral map for the state assembly saw the number of reserved constituencies for the Scheduled Castes (SCs) rise from 29 to 34.

An increase in the number of reserved constituencies and shifting of four assembly constituencies - two each from Majha and Doaba to Malwa - had, in a significant way, altered the power equilibrium.

Punjab is a state where the leaders across the parties are closely identified with the region they come from. This is best illustrated by the fact that quite a few sitting legislators, who were ‘victims’ of the delimitation exercise, had to be adjusted in the neighbouring constituencies as ‘parachuted’ candidates. This led to some of the upset local party aspirants choosing to contest as independent candidates. An increase in the number of rebel candidates further intensified the electoral battles.

Another notable factor that came to the fore in the 2012 state election, particularly in Bathinda district, was the decline in influence of Dera Sacha Sauda chief Gurmeet Ram Rahim Singh (currently undergoing jail sentence) on the electorate. The voters rejected his appeal for supporting his relative Harminder Singh Jassi of the Congress party in Bathinda (Urban) constituency. Jassi’s daughter is married to Dera chief’s son.

Jassi lost to the SAD’s Sarup Singla despite having won from the assembly constituency thrice in the past. The SAD won four out of the six seats in Bathinda district where it had failed to win even one seat in the previous election. The Congress fared poorly as it managed to get only two seats.

It was a reversal of the electoral scenario in Malwa where the Congress had won 22 seats in the 2007 elections while the SAD had got only 10 seats and the BJP two. Irrigation Minister Janmeja Singh Sekhon also sprang a surprise by winning the newly carved out Maur seat in Bathinda. He had won from Ferozepur in the previous election.

Surjeet Singh Barnala, who had split from the SAD, failed to show his strength in Dhuri segment of Sangrur where his son Gaganjit Singh Barnala secured third position, losing to Arvind Khanna of the Congress. 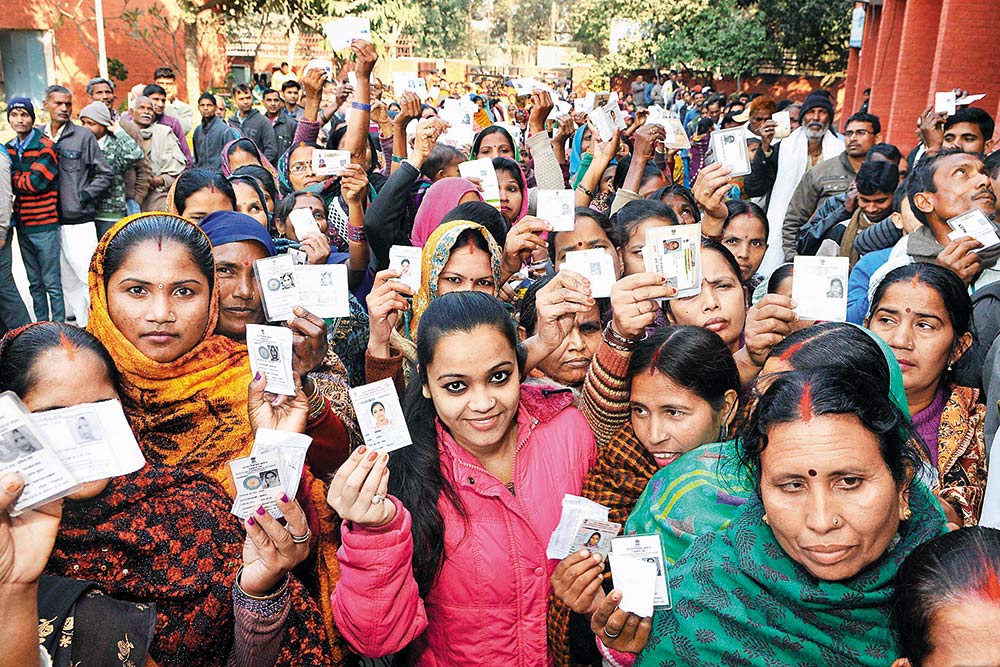 Raising alarm over Punjab facing multiple crises in different areas, the Congress, in its manifesto released ahead of the 2012 state polls, had made lofty promises to rejuvenate the agriculture sector by ushering a second Green Revolution and revive the industrial sector in Punjab. The Congress had also committed to provide 24x7 power supply to all users by adding capacity, restructuring and reforming the existing power distribution system.

Promises to improve law and order, make government machinery accountable to the people of Punjab, and above all make Punjab regain its glory as the most developed and prosperous state in India, were some of the other assurances given by the Congress. During the poll campaigns, the Congress had voiced concerns over the state’s stagnating agriculture economy, flight of industry from Punjab, poor quality of education infrastructure, poor healthcare system, rising number of cancer cases, and drug addiction in the state. Unprecedented power cuts and empty coffers were the other concerns raised. 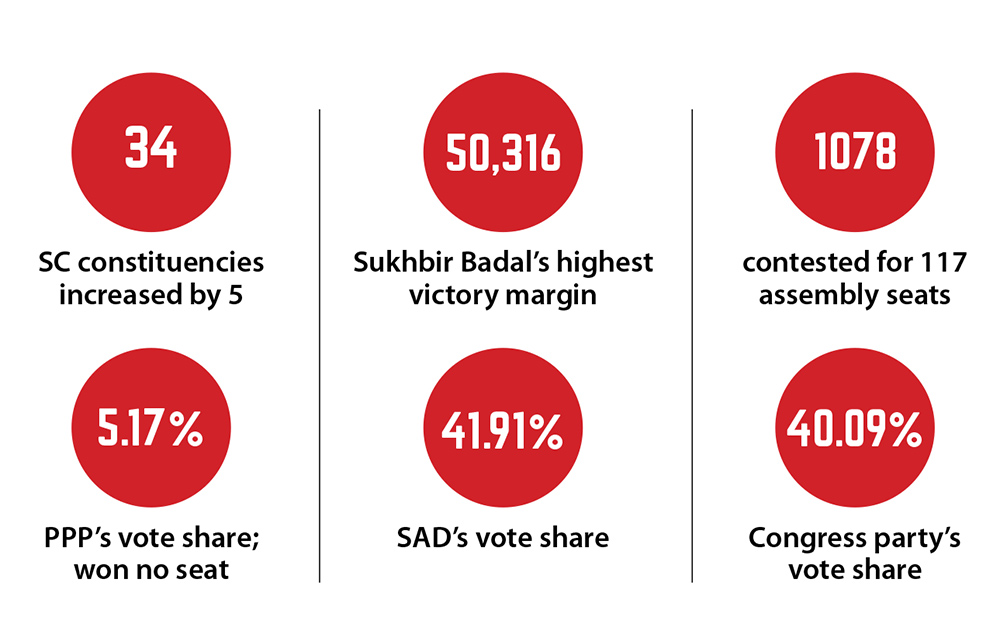 Assuring support to new industrial houses that wanted to invest in the state, the Congress had promised to allow self-certification by the promoters instead of waiting to get 14 different kinds of clearances. The Congress had also promised to set up a powerful vigilance commission with the mandate to rein in corrupt practices in the state government machinery.

The SAD, in its list of promises, had promised the electorate to make Punjab a power surplus state by 2013, making the existing power crisis a thing of the past. In the absence of reliable power supply, many industries had been facing heavy losses due to repeated shutdowns. Focusing on youth power, the SAD manifesto promised free laptops with data cards for class 12 students in government schools and 10 lakh jobs for youths. The party also focused on its old agenda to seek more financial powers for the state from the Centre. At that time, the Congress party led UPA government was in power at the Centre.

The ruling party in Punjab had also promised free education to all girl students up to graduation-level and government jobs to all sportspersons winning medals at international events. Assuring “development for all”, SAD president Sukhbir Singh Badal, who had held the post of deputy CM for over four years, had pledged zero tolerance towards corruptionand ensured an independent and autonomous Lokayukta. The party election manifesto had promised free education up to class 12 to boys from blue card holder families and free bicycles for girl students of classes 9 and 10. To encourage couples to have a girl child, the party promised that Rs 5,000 would be given to parents on the birth of a girl and a Rs 15,000 fixed deposit receipt each when the child completed class 5 and class 10. The SAD manifesto voiced intent to collaborate with the regional parties, to achieve the stated goals.

The 2012 state polls also saw a shift in the panthic (religious) agenda, which had come into play reportedly since the 1997 elections. Over the years, the panthic agenda had started to support peace and development of the state by the mainstream parties. This shift had not been as straightforward or smooth as would have been desired. The fact that identity issues were not raked up during the election campaign was seen as progress in the right direction.

Manpreet-led PPP may not have won a single seat but mustered a vote share of 5.17 per cent, more than 4.3 per cent of the BSP. Manpreet’s aides Bhagwant Singh Mann, Gurpreet Singh Bhatti, Abhey Singh Sandhu and others, all lost. The PPP had fielded 91 candidates, the CPI 14, and the CPM had nine candidates in the poll fray. Later, a year ahead of 2017 state polls, Manpreet, in January 2016, merged PPP into the Congress party.

Of the 1,078 candidates to contest the 2012 state polls, Manpreet Singh Badal was the only one to do so from two constituencies. Upsetting the Congress and the People’s Party of Punjab (PPP) calculations, the ruling SAD bagged 21 of the 38 assembly seats in the Malwa region. The BJP got two while the Congress won 15. SAD rebel and PPP chief Manpreet Singh Badal and his father Gurdas Badal were the prominent losers.

Manpreet lost his traditional Gidderbaha and Maur constituencies. To the dismay of poll pundits, he ended third in both the constituencies. His father Gurdas Badal, who was pitted against his brother and Chief Minister Parkash Singh Badal from Lambi, lost his security deposit. The poll outcome was surprising as all rallies addressed by him were jampacked.

Despite the hyped anti-incumbency, Parkash Singh Badal broke all his previous records in Lambi by securing a lead of 24,739 votes and defeating his nearest rival and cousin Maheshinder Singh Badal of the Congress. He had won in the 2007 election by a margin of around 9,000 votes when Gurdass Badal was his poll manager.

Deputy Chief Minister Sukhbir Singh Badal secured the state’s highest winning lead of 50,316 in Jalalabad. He maintained an unassailable lead right from the beginning over his Congress rival. Sukhbir had devoted very little time for his own campaigning in Jalalabad. Instead, he had deputed his close confidant Nirbjeet Singh Dhanoa to do the job while he toured other constituencies.