It was a fiercely fought election. The 2007 poll result was seen not as a positive verdict for the SAD-BJP combine but a negative vote against the Congress for non-performance and internal bickering

The elections for the 117-member Punjab Legislative Assembly in 2007 were held on February 13. The Shiromani Akali Dal (SAD) and its coalition partner, the Bharatiya Janata Party (BJP), won a majority and Parkash Singh Badal was elected as the chief minister for the fourth time. 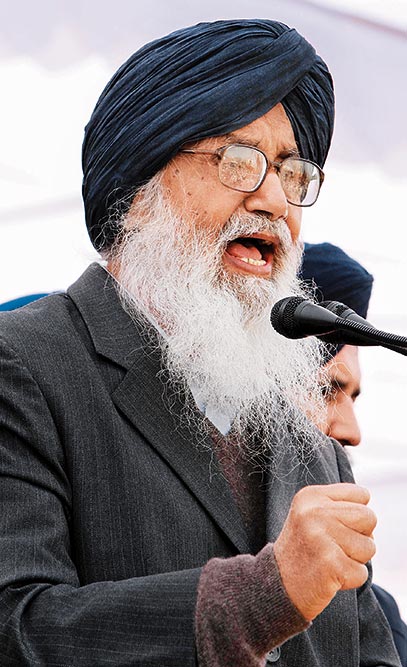 In 2007, the SAD-BJP alliance wrested power from the Congress, winning 67 seats out of the total number of constituencies that went to polls. The ruling party, despite being humbled at the fiercely-fought, high-stake elections, romped home in 44 seats.

The early distribution of tickets by SAD gave it a head start in the election campaign as the Congress announced its candidates much later. Parkash Singh Badal, supported by his son Sukhbir Singh Badal, led the SAD campaign singlehandedly as his longtime bête-noire-cum-supporter Gurcharan Singh Tohra had died. The second rung leaders of the party, Capt. Kanwaljit Singh and Sukhdev Singh Dhindsa, also actively campaigned in the elections.

The SAD -BJP combine won a comfortable majority as its junior alliance partner BJP bagged 19 out of the 23 seats it contested, one more than its previous high of 18 seats that it had secured in the 1997 polls.

The BJP exploited the public sentiment against inflation and Amarinder’s obsession with Akali Dal supremo with the slogans of “Badal, badli aur badla (Badal, transfers and revenge)”. This worked to the advantage of the coalition.

The Congress suffered a setback  as out of the 55 sitting MLAs who contested the polls, 41 lost. Even the SAD faced a similar fate with 14 out of its 18 sitting MLAs losing badly.

The winning coalition led by the SAD could not make gains in the Malwa belt, considered to be the home turf of the top Akali leaders. Instead, the Malwa voters clearly showed a preference for the Congress. SAD won 48 of 93 seats it contested as per a pre-poll arrangement.

The Congress tally in Malwa improved due to the support of powerful socio-religious sect Dera Sacha Sauda which, though headquartered in Haryana’s Sirsa town, held considerable sway in the Punjab’s Malwa belt, particularly the south-west part of the state.

It was the first time that the Badal-led government had faced such a strong opposition and the SAD had to depend on the BJP to form the government. 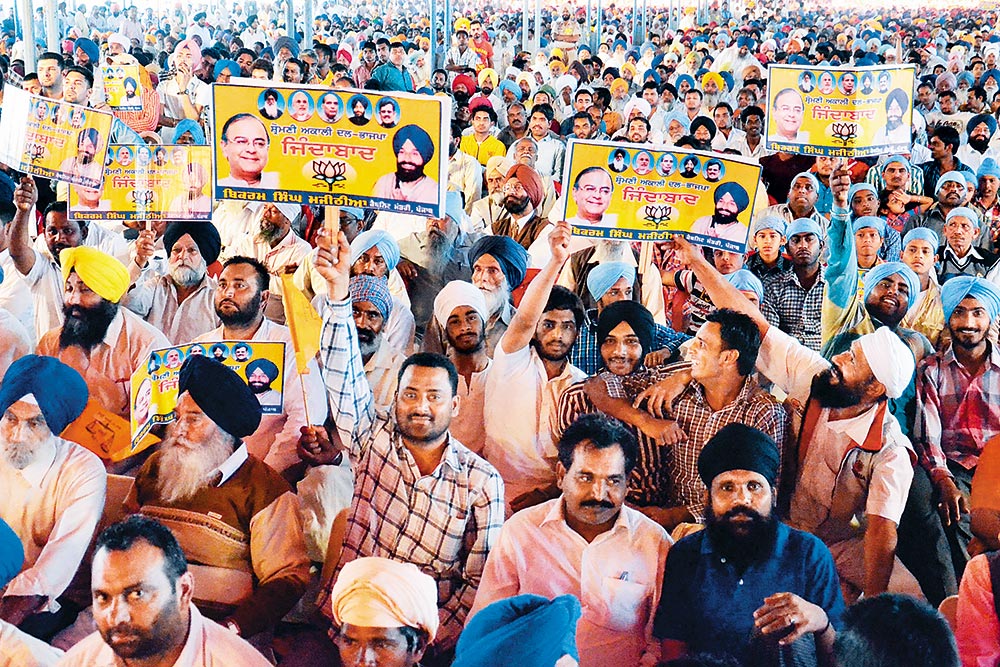 SAD supporters during the election campaign

The 2007 election was fiercely fought and there was a huge turnout of voters despite rainfall in most parts of the state. This also indicated the desperation among the voters for a change.

The main contestants in the fray changed their poll strategy with SAD-BJP focusing on the Scheduled Caste (SC) and the urban voters, while the Congress tried to woo the peasantry, the traditional constituency of the Akalis. Despite Akali splinter groups led by Prem Singh Chandumajra, Ravi Inder Singh, Simranjeet Singh Mann and a large number of independent candidates in the fray, it turned out to be a bipolar contest. The number of independent candidates who won slipped from nine in 2002 state polls to five in 2007.

During the poll campaign, party cadres had made known their acceptance of Sukhbir Singh Badal, who was made the SAD working president. His winning point was the charge he mounted on Capt. Amarinder Singh, highlighting corruption charges against him. To give credence to Sukhbir’s acceptability, senior Badal allowed sons of other leaders also to contest the polls.

Both Congress and SAD had one thing in common – they competed with each other in making lofty promises to the electorate without offering pragmatic solutions to the problems people in Punjab were facing.

Among the factors that led to Congress’ loss, the most important was the shift among urban, mostly Hindu, voters’ sentiments exploited by the BJP resulting in the coalition putting up a good show in the urban and semi-urban constituencies.

Poll pundits say Amarinder suffered alienation mostly due to his pro-Jat image and his involvement in gurudwara politics, which the Congress had never done in the past. Another important factor was the lacklustre performance of the Amarinder Singh government with the Chief Minister emerging as a remote figure even among his own party men. His style of operation ensured that Singh was always surrounded by his group of loyalists that included highly controversial bureaucrats. Though Amarinder Singh’s government had come to power on anti-corruption and good performance, there was little or no forward movement on those two fronts. Instead, the state government seemed to be focused only on launching an offensive against the Badals, completely forgetting governance.

The scenario was similar to that in 2002-07 when the previous Congress government suffered due to internal bickering between a group of leaders led by former CM Rajinder Kaur Bhattal. It was only after the debacle in previous Lok Sabha elections that some attempts were made to put the government machinery in order, to show that the government meant serious business.

The SAD had won the elections in 1997 on the promise of free power to the farmers’ pump-sets and water scheme for the farmers. Ahead of the 2007 polls, the Akalis took a lead in promising public distribution of wheat flour at Rs.4/kg and pulses at Rs.20/kg to people belonging to the BPL families if voted back to power. In the wake of rising prices, the promise had mass appeal, a fact grudhingly recognised by the Congress which also promised to do the same. 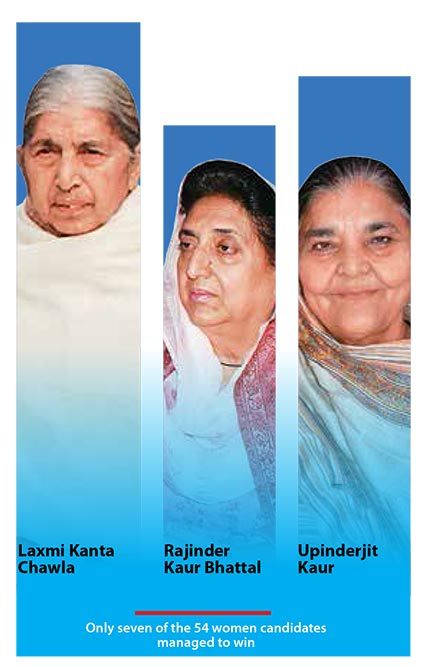 Among other promises made by the SAD-BJP coalition in their manifesto  were: filling all the government vacancies within six months of coming to power; health insurance of up to Rs. 2 lakh for the farmers and landless laborers; free power to the dalits to be doubled from 200 units to 400 units; Rs. 15,000 as “shagun” for the poor belonging to all the communities; Rs. 250 to Rs. 400 old age pension and pension for the disabled, widows and assistance for dependent children; ‘make your own policy’ for trade and industry; VAT to be streamlined, and Rs. 5 crore to be spent on 100 block-level Adarsh schools and more Adarsh schools to be set up to educate 1.3 lakh children within 3 years.

The 2007 poll result was not seen as a positive verdict for the SAD-BJP combine but a result of negative vote against the Congress for non-performance and internal bickering within the party. In the absence of credible alternatives, the electorate in Punjab has repeatedly voted for the other party in consecutive elections, possibly opting to forget its shortcomings in five years.

Like in the case of the Congress victory in 2002, the SAD-BJP had come back to power in 2007 primarily due to the follies of their opponents rather than their own policies and programmes. The glaring failure of the parties to focus on substantive issues like the structural crisis in the agrarian sector, in this once widely-hailed ‘model state’ and ‘the granary of India’, does not augur well, particularly in the backdrop of violent days of militancy witnessed in the state not so long back.

Ashutosh Kumar of Panjab University summed up the election result as “hardly surprising as the incumbent SAD-BJP coalition government that held out the promise of providing cheap flour and pulses in its electoral campaign has so far shown no real inclination to desist from resource-guzzling populist schemes that over the years has brought the state to the brink of economic and financial disaster. Nor has the personalizing and centralizing leadership desisted from following the now very familiar politics of vendetta against their marked rivals”.

Writing on the role of females in the Punjab politics, Ashutosh Kumar said it remained lop-sided in terms of gender representation as the number of women legislators has never reached double digits. He pointed out that the 2007 election was no exception as only 54 women candidates (the Congress had given tickets to 10 women) were in the fray. Of the seven women who could win, the most important were Laxmi Kant Chawla and Dr Upinderjit Kaur, both now cabinet ministers, from the Amritsar central and Sultanpur Lodhi constituencies respectively, and Rajinder Kaur Bhattal, now CLP leader, from Lehra Gaga. A notable win was that of Razia Sultana, a serving MLA of the Congress who defeated the SAD candidate Abdul Gaffar in Malerkotla, the only Muslim-dominated constituency of the state.

A faction of the Bharatiya Kisan Union (BKU) led by Balbir Singh Rajewal had extended support to SAD while another faction of the BKU led by Bhupinder Singh a former Rajya Sabha MP, had announced support to the Congress party. The key contenders were selected by both SAD-BJP and the Congress on the basis of castes and communities. However, Rai Sikhs and Lobanas decided to oppose the Congress. The Bairagi community, which claims to have a vote bank of 8 lakh in the state, was also upset with the Congress for not fielding any candidate belonging to their lot.

Two days ahead of the polls, former prime minister and BJP stalwart Atal Bihari Vajpayee campaigned in the polls. He reached Amritsar to address a poll rally accompanied by senior party leader Sukhdev Singh Dhindsa and Tarlochan Singh, then a Rajya Sabha member. In his speech, Vajpayee urged people to vote for “change of weather” in Punjab. 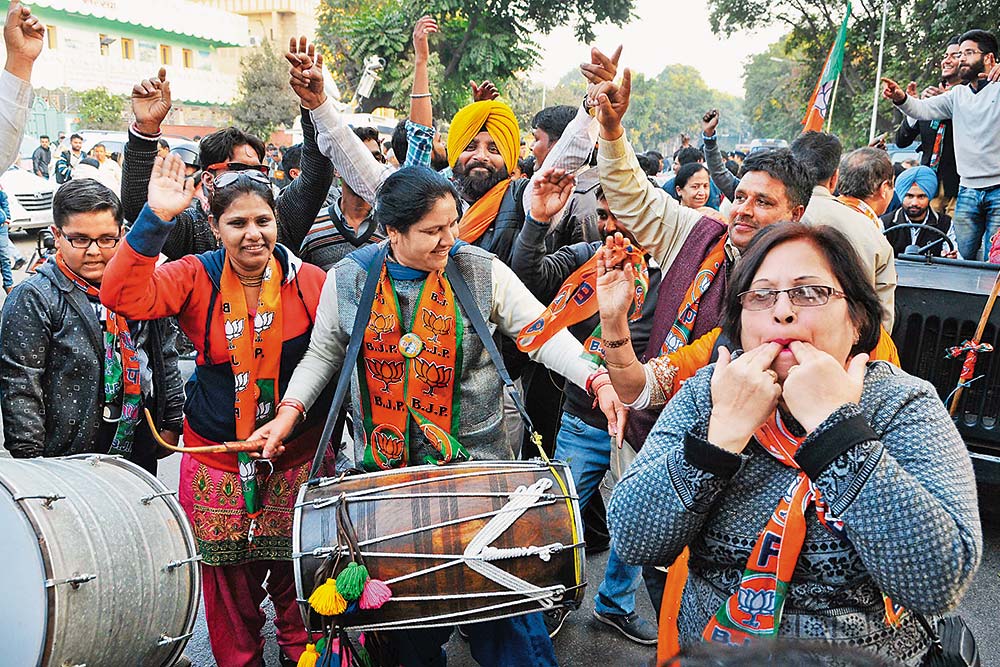 Addressing the rally, the charismatic leader had said: “Mausam badal raha hei, dhup nikalne wali hei” (political weather in Punjab is changing, the sun will shine soon). Recalling suicides by farmers in Punjab, Vajpayee criticized the government saying that no compensation was given to the kin of the deceased farmers while other states had granted adequate compensation to them.

Expressing anguish over the deteriorating economy of the state, Vajpayee said that Punjab was prosperous, so it would regain its glory. He assured that the SAD-BJP combine would change the “tasveer” (picture) and “takdir” (destiny) of Punjab, once voted to power.

As the Congress-led government at the Centre and state had failed to arrest inflation, Vajpayee stated that the SAD-BJP combine would fight against price rise. Pointing to the poor medical infrastructure in Punjab, the former prime minister said that there were many hospitals, especially in the countryside, without doctors and nurses.