Pakistan foreign minister wants to be remembered as the person who played a role in improving relations between India and Pakistan... Updates. 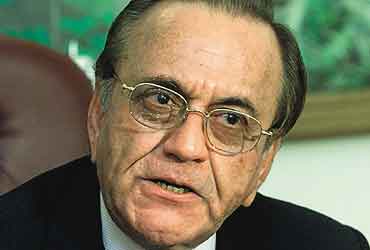 outlookindia.com
-0001-11-30T00:00:00+0553
Pakistan foreign minister Khursheed Mehmood Kasuri has a dream: he wants to be remembered as the person who played a role in improving relations between India and Pakistan. And it's because of this dream that he prefers to respond cautiously to questions, eschewing the temptation to provide sensational, headline-grabbing comments. Quite unlike information minister Sheikh Rashid Ahmed, you could say. Such restraint is surprising considering that Kasuri's village sits on the Indo-Pak border and consequently experiences the diplomatic ill-will in all its ferocity. Fresh from his tour of Europe, Kasuri spoke to Mariana Baabar on the recent peace proposals India and Pakistan have put before each other.

What do you think of the recent peace overtures?
A fair analysis would be that both India and Pakistan want to normalise relations with each other. As far as the Pakistan government is concerned, there is no doubt in my mind that this is indeed true. Despite the ups and downs and the blow-hot-blow-cold attitude, a pattern seems to be emerging (that indicates) India also wants to improve relations. Maybe (I see it this way) because I'm an optimist. If we are serious about tackling poverty, both countries have to increase their gdp. Economically, Pakistan is doing well. Our socio-economic indicators are good: our reserves are enough to bankroll one year of imports, our credit ratings also good. Nevertheless, there has to be a meaningful attack on poverty so that both countries can raise their gdp.

It's also very clear that there are important lobbies in both countries which, perhaps, feel uncertain, are deeply insecure and entrenched in a certain frame of mind that makes them hesitant to look ahead. This, I feel, is more prevalent in India. But ordinary people in both countries have realised that it is in their interest to respond positively to the leadership in Pakistan and India. We require statesmanship to push forward those who are hesitant. Pakistan, at least, is prepared to do that.

Hasn't Pakistan put forth an impossible precondition (UN documents) on India's proposal to initiate a Srinagar-Muzaffarabad bus service?
Pakistan has always been in favour of encouraging contacts between Kashmiris on both sides of the Line of Control (LoC). We strongly feel that Kashmiris have more to lose in the continuation of present conditions when their lives and property are more at stake than anybody else's. They have more to gain from such contacts.

But let me be candid—and this is no secret—many in Pakistan feel India offered confidence-building measures (CBMS), especially the bus service between Srinagar and Muzaffarabad, fully knowing that Pakistan wouldn't agree to Kashmiris travelling on Indian documents. It was more a question of Indians trying to look good to the world. If there is still a genuine desire to encourage people-to-people contact in Kashmir, then the modalities could be worked out between the two countries.

We suggested UN documents for travelling because Pakistan will not accept Kashmiris living in Indian-held Kashmir as Indian citizens. Our contention is that their future is yet to be determined. It is precisely on such problems that both India and Pakistan should start a dialogue. India, at present, is only interested in a public relations exercise, by announcing piecemeal CBMS and trying to look good to the world by launching a peace offensive.

Why do you say that?
It's a grievous error on their part to not take into account the desires of Kashmiris. The whole world knows this is the cause behind the continued tension and the three wars between us. All major world leaders have told me that these CBMS (of India) are good but Kashmir will have to be discussed for durable peace in South Asia.Maybe the reason for all this is that some sections of the Indian political establishment thrive on anti-Pakistan and anti-Muslim slogans; they feel these are two useful political weapons to use before elections. If this is the case, then it's a real tragedy because one can never predict what consequences elections based on anti-Pakistan and anti-Muslim slogans can have for the future of peace in South Asia. Political strategists may feel this is quite legitimate a political platform and that genuine talks could start after the Indian elections. This is very short-sighted: animosity bred in election campaigns will itself influence the course of action between the two countries.

Why didn't Pakistan moot the idea of a Srinagar-Muzaffarabad bus service?
We've seen genuine improvement in relations from the time of my first statement as foreign minister in which I said that India would top my agenda, to the flexibility that President Pervez Musharraf displayed at Agra. Of course, Prime Minister Vajpayee displayed equal flexibility as well. Then, Prime Ministers Mir Zafarullah Khan Jamali and Vajpayee announced nine CBMS. Pakistan is concentrating on the big picture rather than on mere public relations exercises. When you concentrate only on PR exercises, then you end up adopting a very myopic view and do not accept genuine dialogue to resolve all outstanding issues, including that of Jammu and Kashmir. These public relations exercises will not help in the long run. That is why our attempt is to go to the root of the problem. India finds it convenient to escape dialogue and concentrate only on the CBMS for public relations. My opinion, and that of many serious-minded Indians, is that it is in India's own interest to have normal and friendly relations with Pakistan.

Why does Pakistan insist on guarantees that air links between the two countries—and overflight routes—should not be suspended under any circumstances? Can you cite any other instance where a country has been given such guarantees?
Well, not many countries in the world would unilaterally cut off all air links. Why is it so difficult for India to make a formal statement that it would abide by international norms, unless of course it wants to use this right unilaterally against Pakistan? We should plan for a future which will provide a degree of comfort by ensuring that such actions as unilaterally cutting of air links do not happen again.

Don't you think overflight facilities will have to be extended to India at least by December, otherwise how would the Indian prime minister attend the SAARC summit?
Without a shadow of doubt, Prime Minister Atal Behari Vajpayee will be welcomed to Pakistan whether or not the expert-level talks on resumption of air links are concluded. The Pakistan government will provide necessary facilities for Vajpayee to travel in comfort directly from New Delhi to Islamabad.

India's external affairs minister Yashwant Sinha has said, "We have to point out at the SAARC summit that the previous decisions, not merely of 2002 but of earlier SAARC summits too, have not been fruitful." What do you do to that?
Whether or not the SAARC summit takes place is a question of political will. Pakistan wants to ensure that the forthcoming summit is a success. Unfortunately, SAARC is hostage to Pakistan-India relations. Therefore, there is greater responsibility on these countries to make SAARC a success. One reason why there hasn't been enough progress is because the summit has not been held at regular intervals as is mandated in the SAARC charter, which calls for annual meetings. Unfortunately, in the past, because of India, the SAARC summit could not be held on time and there were gaps of a couple of years between such meetings.How can we make progress if these meetings are not held? The SAARC charter does not give the right to any country to impose preconditions for the holding of its summit and this is specially true if anyone wants this organisation to succeed.

China, Japan and Iran have shown interest in joining SAARC. What is Pakistan's view?
The enlargement of SAARC is an issue that one can comment upon only when the organisation becomes fully operative and effective. We have seen reports such as these circulating but nothing has been put formally to the SAARC secretariat. So, it would be premature to comment on this now.

'We Can't Impose On India'