India, In A Minute

Television tells stories in real time. In telling them, it changes their course. 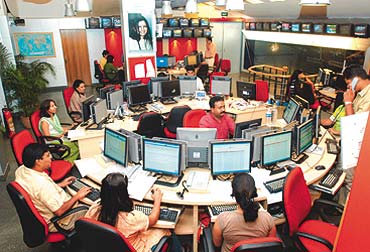 But as a first-generation child of the industry—my career coincided with the birth of private television—I can tell you one thing: if the written word is a symphony of thoughts, TV is the opera. Except that we capture the theatre of life as it unfolds, in real time, with neither rehearsal nor encore. To script this drama needs not just imagination, but an inordinate passion, curiosity and hunger that only the insane possess. It's easy to slot us as slightly stupid soundbite soldiers. But try it for a day, and you will marvel at the sheer energy invested in the pursuit of news.

Sometimes, when I look back, I'm stunned at the things I was willing to do. I have stood at traffic lights to wave down cars whisking away camera-shy netas (a decade ago, there was such a thing). I have broken more security cordons than I care to admit: many years ago when a dusty Delhi court charged Congress leader Kalpnath Rai with shielding terrorists, I raced past 70 disbelieving cops who had formed a human chain, jumped on to a ledge and hung three feet from the ground so I could put a mike in front of Rai's face. As he spouted Shakespeare, tears rushed down my face. But it was not because I was moved by his poetic proclamations of innocence; it was because the court's resident monkey had taken a bite of my dangling ankle at exactly the same moment. The thought of stopping my camera was inconceivable.

Then there was the time right after IC-814 was hijacked. Jaswant Singh was on his way to Kandahar and we were desperate to be on his plane. At the airport, security was impenetrable. Suddenly, I spotted a battered food van making its way inside the compound. I pleaded with the driver, jumped on to the back, found a place next to the boxes of squishy sandwiches, and thought I had a ticket to ride. Of course, on the tarmac, a horrified foreign minister used his sternest baritone to send me packing. But at least I had tried.

That's my point: Television, I believe, has energised Indian journalism and made it much more robust and responsive. Even if we are sometimes mindless, we are never lazy.

The 24-hour news monster is a merciless master; every minute matters; every detail could be newsworthy. Television's gaze is unflinching and relentless and its immediacy makes it interventionist without even trying. Call us trivial if it makes you feel better, but consider this: we have dramatically influenced the course of every significant event in the last decade.

As someone who reported on the 2002 riots in Gujarat, I can tell you this: if private television had been around in 1984, the anti-Sikh riots in Delhi may have played out very differently. Of course, print journalists also told stellar stories from Gujarat, but in the end it was those images that did it: the burning homes; the charred remains; the bodies strewn by the roadside; the arm outstretched in a plea for help that never came; and the mobs that thought nothing of thrusting their sticks and petrol bombs into our cameras.

And I realised yet again just how terrifying the power of a single image can be. Four years later, I can still see the picture in my head: a soot-stained page from the Quran trapped under a mountain of burning plastic. At first, I thought this was the perfect metaphor for the carnage that was unfolding before my helpless eyes. The picture made its way into one of my reports. The impact was instant; the image was potentially inflammatory and there could be a backlash. We pulled it off air; I had clearly made a mistake.

It wasn't the first error of judgement I've made, and I know it won't be the last. It's because we tell stories in real time that we're able to alter the anatomy of events. But it's also why we are more vulnerable to blunders. We just have that one split second to decide. And in that time, we must find a way of not just telling the story, but telling it well and without insensitivity.

How do we tell our viewers that scores of women in Gujarat were raped before they were burnt alive without ever showing a single shot of that woman we found with her legs wrenched open, and her head pushed back? How do we report on the mass grave of little children we stumbled upon in the aftermath of the tsunami? How do we underline the full trauma of a terrorist strike in Kashmir without looking like we are vultures feeding off death? These are profound philosophical questions; we usually have under a minute to answer them.

And in that moment, we aren't always aware of our own ability to set the agenda. We're just struggling to keep pace. Never was that more true than during the Kargil war of 1999. It remains Indian TV's most famous moment and the definitive story of my own career. But in those days—ducking bullets, braving shells, spending days without food with gunshots to mark the hour—we had neither an agenda nor a plan. I remember this one moment: the Pakistan artillery was battering the Indian side and a shell had hit an abandoned oil tanker setting it ablaze; the fire was in danger of spreading to an ammunition dump close by. I jumped for cover behind the giant wheel of an army truck (a soldier was kind enough to slap a helmet on my head). But even as I lay there on the road, hovering between life and death, I couldn't think beyond the moment. I was furiously working my satellite phone, my mind anxious to get the details right—were the flames orange, was the firing intermittent, were we 10 metres from the burning truck or 20—it wasn't so much that we were fearless; there was simply no time to be scared.

Of course, we were overwhelmed: I was especially moved by the emotional turmoil of the young soldiers, really boys-who-would-be men once they dropped the machismo mask. But till I returned to Delhi, I was completely unaware that thanks to TV, these young men were now iconic, household names. We had inadvertently united an entire nation.

Years later, I shudder at the outsourcing of journalism to private detectives and their hidden cameras; I cringe when I meet women who know how to wear their lipstick but aren't ready to get any dirt under their nails; I am bored by the banality of breaking news, and I am ashamed when television converts suicide into a spectacle.

Yet, every once in a way, something happens to do us proud. Most recently, the wave of Indian middle-class activism has sprung from the shores of television studios. Campaigns for justice or for the right to information have all used television as their launch pad. And that remains our abiding contribution to India: accountability. Television has been transfixing, transformative, and yes, sometimes terrible. But can you really imagine a dynamic, forward-looking India without it? We are the guys you love to hate. But admit it, you can't look away either, can you?