"If you account for 20 per cent of the world’s population, only contribute 2 per cent to global trade, but still want 8 per cent growth, you need to open up." 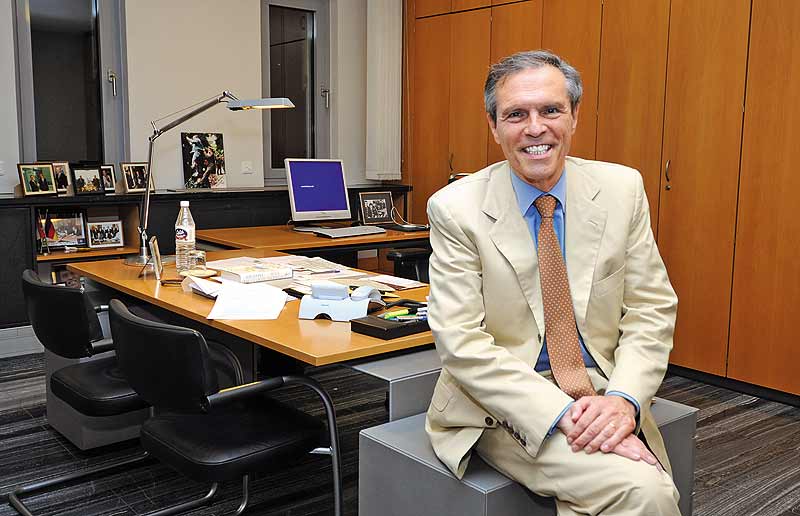 Jitender Gupta
Pranay Sharma October 29, 2012 00:00 IST ‘India Has To Open Its Market More To Those With Whom It Shares Interests’

German ambassador Michael Steiner is no stranger to India. The 63-year-old diplomat arrived here in July to take up his new assignment. But as Germany’s special representative for Af-Pak, Steiner has been engaging with Indian leaders and senior officials for several years. He spoke to Pranay Sharma on what India’s latest round of economic reforms means and how the country is seen as an investment destination by German investors. Excerpts from the interview:

How do you react to the latest rounds of economic reforms announced by PM Manmohan Singh?

I am convinced that the government means what it says. It is acting on Indian interests. I find it impressive. There is this recognition that something has to be done in the interest of the Indian people. But even more interesting than the government’s position is the reaction to it in the Indian media.

So do you see a negative or a positive reaction coming from the media?

"If you account for 20 per cent of the world’s population, only contribute 2 per cent to global trade, but still want 8 per cent growth, you need to open up."

Some thought a section of the media will say it’s good, while others will say it’s bad. But that didn’t happen. Of course, it’s a democratic country and there are different views. But in general there was a broad-based support for the necessity of moving forward. Everybody did not have the same view, but there was this ground support. Even among the people, though they do not share identical interests, there seems to be a broad understanding that something had to be done. When I came here in the spring, everyone was talking about how nothing is moving here and that nothing would move till elections were held. But you have a vibrant society that is debating and discussing the issue.

And what does that tell you?

I am reminded of the situation in Germany about 10 years ago when it was seen as the ‘sick man’ of Europe. Our politicians realised that we would have to make the society more flexible and adaptable in accordance with the changing times and undertook some significant reforms. Though there was a lot of criticism then, in hindsight everybody in Germany today admits that this was the right thing to do and that was something that changed the country.

"I’m convinced the government means what it says. There is this recognition now that something must be done in the interest of India’s people."

Do you see a parallel there?

Parallel might be too ambitious a word to use at this point. But as an ambassador, I can see that something is moving. This is not being done for the foreigners, but in the interest of Indians. This is to ensure that poor people get a better life. It is to mobilise the society and tap the potential that India has. To me, this is very good news. We know now that in the age of globalisation, we cannot go it alone anymore. What we do not only has an impact internally, but also externally. If this course is held, it will not only change the internal image but also the external image of India. And this is important because there is a ‘beauty contest’ out there in the wider world where every country is vying for investment from outside.

Did India’s image as an attractive destination for foreign investment take a beating prior to the reforms?

We need to be honest. Just going by the analysis of the government and what it said (as also what was said about it) in Parliament, I think everybody sensed that the picture of a ‘Shining India’ was getting a bit grey. Potential foreign investors had started looking twice at a number of cases in India, which did raise doubts. Viewed from this perspective, it is a welcome change for India to get back on track. And it is the Indian, and not any foreign, track.

What are the areas of concern that still remain when you look at India?

Reforms will not work overnight as we have learnt from having experienced from the crisis in Europe. You cannot change the situation with a magic wand. It is a long-term process and is cumbersome. We are talking not only of a tactical but a strategic change and of getting back on track. These are political issues and there will be mistakes and compromises as there are everywhere else in the world. But the fundamental point is to recognise the need to change things and (have) the political will to move forward. When I came here, the mood I encountered was very different from what I see this autumn.

Some feel the reforms announced by the PM may not get passed in Parliament since the ruling party does not have the numbers. If that happens, will it be seen as a setback?

It has to be seen as a whole with the image of India in its entirety. It will be good if the need for reforms is viewed as a common endeavour. The issue of inclusiveness is a positive thing and if there is a broad support (for reforms), it is better for India. As an ambassador, what is good for India is good for my work and my country. If India is acting in its own interest, that is moving the country forward and it is good for us.

"If this course is held, it will change the external image of India. This is important since there is a beauty contest in the wider world for investment."

Is the coalition nature of the Indian polity, where no political party has the ability to form a government on its own, a worry?

The huge advantage of India is that it is a democratic country. Of course you pay a price for that. But there is also a consensus that, for democracy, it is a price worth paying. Things might take longer here as opposed to, say, an autocratic regime. The answer also lies in part with how the reforms are communicated. If it is clear for whom the reforms are intended, it should be easier to overcome differences. If you want India to foster economically, if you want to bring the poor in a more participatory process of the society, to educate the young people and bring them in the job market then there aren’t 10,000 different answers for that. You will have to bring changes in the economy and the education structures that activate the system. Therefore, certain hurdles need to be overcome and this is a lesson every country draws for itself.

So you see these debates, despite the fact that they may slow down the process, as something that helps in building that broad consensus?

A part of the democratic system is the duty to explain why changes are necessary and outline what difficulties might occur if they are not brought about.

In comparison to China or other countries in Asia, where does India stand? Our pluses and minuses?

It is clear that a decision-making system which is inclusive takes more time. But once the decision is taken, it is much more sustainable. In the long run, it is an advantage for India and it is bound to bring success. But it is necessary to keep certain things in mind. You want (your economy) to grow at 8 per cent a year. But you are in a subcontinent that accounts for 20 per cent of the world’s population and whose contribution to the global trade is only two per cent. To narrow the gap between these two, you will have to take steps. And if you want to grow at 8 per cent, this can only be done in a globalised world with cooperation from outside.

So you are saying India needs to open up its market more?