India Had Nukes And Delivery System In 1994 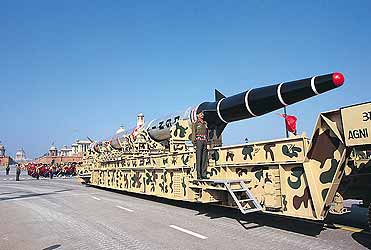 outlookindia.com
-0001-11-30T00:00:00+0553
The revelation, it seems, can finally be made, on the fifth anniversary of Pokhran II: India had become a functional nuclear power with a capability to deliver nuclear weapons four years before the May 1998 tests. Two sources, who were in the decision-making process then, told Outlook: "By 1994, weaponisation was complete for vectors (delivery systems) available as of that day."

Then, aircraft constituted the country's sole delivery system. India's nuclear weaponisation programme of 1994 entailed identifying the right aircraft as delivery vehicles for nukes, tailoring these weapons to suit the aircraft and/or modifying the aircraft itself. All these were carried out by selected groups of people drawn from different fields.

One of the two Outlook sources says, "Since the need-to-know principle was applied, people concerned with the weaponisation programme knew about it. The services arm, which was involved, also knew about it."

Not merely that, even the command and control system for strategic nuclear weapons had been functional from before 1999. "We began to work on it almost 10 years ago, in 1993. Through the mid-'90s the planning and implementation took place. In its present form it has been more or less functional since 1999," the sources say. It was only on January 4 this year, four-and-a-half years after India declared itself to be a state with nuclear weapons, that the command and control system was formally announced.

In this sense, sources say, "Pokhran II of 1998 was only a coming-out party." Three years earlier, in the winter of 1995-96, a day had been identified to carry out nuclear tests. However, 72 hours before the D-day, the then prime minister, Narasimha Rao, retracted his decision on the tests. Even earlier, in 1983, India had come close to conducting nuclear tests. But, sources say, just because the tests were not conducted in 1995-96 and 1983 did not mean that the nuclear weapons programme was put on hold.

By May 1998, the 1974 design had not only been further modified, reliable detonators, triggers, mechanical and electrical fuses, flight trials and other processes—preceding the acceptance of a nuclear delivery system—had been fully developed. These were satisfactorily carried out to military specifications and certified through certain established processes.

These new and credible assertions suggest the Indian nuclear programme has far more depth and higher levels of integration than previously credited with. This was evident in the statement issued together by the department of atomic energy (DAE) and the Defence Research and Development Organisation (DRDO) on May 17, 1998. It said: "One of the laboratories of drdo had the task of 'weaponising' proven designs. This activity involved design, testing and production of advanced detonators, ruggedised high-volt trigger systems, interface engineering, systems engineering and systems integration to military specifications. Three other laboratories contributed in the area of aerodynamics, arming fusing, safety interlocks, flight trials etc. The drdo has further conducted a series of trials and achieved the necessary operational clearances." Minus the jargon it means the delivery system had been successfully tested.

The tests that were done in May 1998, add sources, "could have been done just as well in 1996". That the tests occurred in 1998 is, among other things, because of the "stellar role that Brajesh Mishra played, with clear directions", sources say.