He's been there, done that. But when he's back home, he wants a 'sohni kudi' who looks good, talks well, minds his house...but has no mind of her own 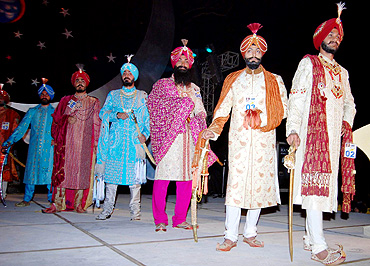 outlookindia.com
-0001-11-30T00:00:00+0553
Last week, I found the pleasure of the unexpected. In a new edition of provincialism. It was dressed in dinner jackets, sat around a table sipping Patiala pegs at Bottoms Up— a likely name for the only pub in Hoshiarpur. Five men, over whisky in chai ki glassi and bomb chicken, discussing their identities, choices, manhood, attitudes towards sex, wives...lit a bonfire of macho vanities. Every once in a while, an aphorism underlined their conversation: "...Mard di mardangi mard de dil vich hondi hai (a man's manhood is in his heart)".

Nothing is lost in translation. The pursuit of women, animals and biceps, the convenience of arranged marriages, the insecurities of men and the frailties of women...the talk moves in loops and lurches, but is moored around the idea of virility and machismo. No sooner does it stray from its pivot than someone from the group, in this instance Gunraj Singh, interjects. "Ask me about any weapon in the world," he says. A deep scar on his left eyebrow speaks for itself. Born and bred in Hoshiarpur, lived and loved in America, but returned to his mustard fields, Gunraj, the owner of Bottoms Up, is straight out of television soap. He would be Carlos Solis, Gabrielle's husband, the macho man, if a Punjabi version of Desperate Housewives were made. Or, Nahar, Saloni's over-righteous husband in Saat Phere—Saloni Ka Safar.

Provincialism may be an inherited trait, but the province is also a place where attitudes change. While in the States, Gunraj did it all. "Girls, parties, a job, a degree, a business... I got what I chased," he says without any trace of modesty. "To be honest, those girls may be good fun, but can't make good wives," he adds. To be fair to him, he is consistent in his machismo, be it in the US or in Hoshiarpur, now his fiefdom where he is the local Mr Fix-It. He plays out the role of noblesse oblige, dispensing favours and hospitality. "Khundak" describes his idea of manhood and territoriality, as it does for thousands of men in North India. Gunraj lives by the turban he seldom wears, his wife, his children and his friends. The order changes, depending on what defines manhood on a particular day. 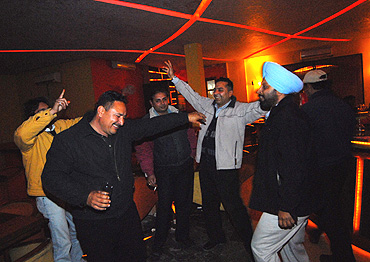 Kya Cool Hain Hum: But only on the outside

Gunraj's friends—Romel Pabla, Captain Ravi Chaudhry, both merchant navy officers, and Dr Sukhraj Saini, an orthodontist—share a similar set of pride and prejudices. Puninder Pal Singh, the latest entrant to the group, is just 18 years old. He may occasionally chuckle at his paajis, but he too is cut from the same cloth. Age changes nothing; machismo coopts all disparities.

The conversation now lurches, as it must, to sex. And it is only here that relationships with women are addressed. Dr Sukhraj brings in an unexpected flavour. "I am attracted to independent-minded women who know what they want, both in work and in bed," he says. The others offer silence as argument.

These men have clear expectations from 'wife and life'. Hoshiarpur is not Fursatganj, which Abhishek Bachchan fled like a bat from hell in Bunty Aur Babli. It is a prosperous agricultural town. It gives its denizens the money and the time to bridge the dichotomy between their feudal retreat and their global travels.

The Outlook-GfK Mode 2008 Survey on Small City Men emphasises these attitudes. Unlike urban men, men in small cities are not negotiating mind-altering changes to accommodate the freedom or ambitions of women. Not even trying to. They live largely by the old rulebook.

Sex appeal implies a physical abandonment, an acknowledgment of the difference between our public and private selves. Once we know the distinction between the two, we live one and speak the other. This duplicity is potent. One is socially correct and the other is personally valid. So, what's the difference? Aren't all men doing this all the time in the city and the province? Isn't this hardwired in their malehood? Isn't one a good pickup line, the other a sentence for life? So, what differentiates provincial attitudes from those found in big cities? The city breeds schizophrenia, where the mask becomes the face. In the province, rhetoric and reality join hands. The private face is comfortable with itself.

Capt Chaudhry, nicknamed 'ramp model' by his friends, digs up the insights. "I find power attractive in a woman, but I am not sure if I would appreciate it in my wife," he says. Make no mistake, Ravi is no parochial farmer. He has sailed all over the world, is urbane in manner and dressing. But makes no bones about the fact that he wanted a homemaker wife. He also points out that it would have been difficult for them to have a frank conversation with me if I were dressed in a sari instead of jeans. "Let's accept that these perceptions exist; the sari somehow implies conservatism and jeans...well," he says. 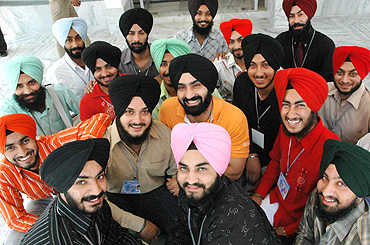 Virginity or virility, it's all about two sets of standards. One for the man. And the other for the man too. Or as Gunraj says, "That's male mentality, what to do?" All of them admit that looks matter most in a woman, followed by 'loving nature' and education. The survey supports this—33 per cent of men from all eight cities say good nature is what they seek most, while 23 per cent believe that a beautiful face is the most important facet of a woman. Intelligent women are off-putting, with only 15 per cent men voting for it. And yet, no one wants a village belle. They are all in the quest of the proverbial full cup: a smiling, 'adjusting, educated' wife who will please her in-laws and live happily ever after as a housewife.

Political correctness seldom serves up a true picture. Certainly not an understanding of sexuality. Provincialism has always been a place in the mind, not on the map. And yet it dons a regional identity, giving a man from Guwahati a different social DNA from the man in Coimbatore or Meerut. But sexuality is the exception that proves the rule. It obliterates regional differences. Virginity is the lowest common denominator that unites them all. Our survey supports this thesis. Across India, 30 per cent of unmarried men admitted to having sex with partners/girlfriends and yet 70 per cent said they expected their wives to be virgins at the time of marriage! Three-fourths of the men also admit that their own pleasure in bed is more important than that of their partners. 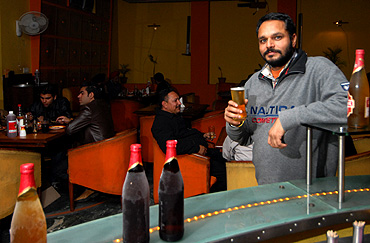 Bottoms Up: Hoshiarpur pub as blase as owner Gunraj

Next morning, it's the turn of the women. Over buttered aloo paranthas, lassi and homemade pickles, they talk of their lives as wives. They aren't suppressed, oppressed or shy, but nor do they live under any illusions. Attractive, amiable and warm (just as their men like it!), they enjoy their numerous kitty parties but don't club, pub or pursue careers. His domain is the outside; hers is the home. They agree that things are changing and hope their sons will grow up to be different men. But not one among them speaks of the husband as the SNAG (Sensitive New Age Guy). Financial independence, the core of women's freedom anywhere in the world, eludes the Hoshiarpur wives. They are rich and well-cared-for, but as one of them said: "We have cars, bungalows, a rich husband and family property; but nothing out of all this is ours."

Ladies of leisure in Ludhiana said the same. Formerly termed 'Lousyana', Ludhiana is now a frills-'n-fancies town, home to a very rich class. Women in black dresses, fishnet stockings, boots and immaculately done hair and nails dot the coffee bars. Many drive Corollas or Mercedes Benzes and by their own admission "have fun" while the husbands mind fields and factories. The men give them roti, kapda, makaan and shopping allowances, but also lay down the rules of the game. "Husbands don't mind their wives having an odd drink or their own social life; but the limits are set and we are expected to get home before dark," said one whom we bumped into at Bakes & Beans, a popular coffee joint.

Fear enorces the curfew. Gossip and rumour, windmills of any civilisation, become a bane for small towns. Men and women are safer playing conventional roles instead of the musical chairs (or beds) that tempt them in metro cities. In social and filial situations, the missionary position is still the favourite—the men are on top.