Sachar proposes: weave the Muslim poor into the OBC quota—as 'Most Backwards' 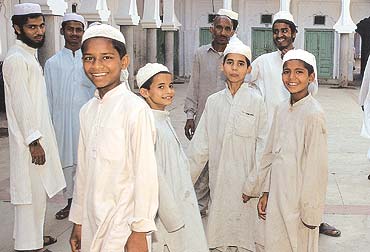 Following are the highlights of the Sachar Committee recommendations:

The Sachar Committee looking into the status of Muslims in India has recommended that the community's poor be accommodated within the OBC category. Outlook has learnt from well-placed sources that the panel has also suggested bifurcation of the OBC category; carving out a separate MBC category and putting the "Dalit Muslims" in that. In other words, no tampering with the existing Scheduled Caste quota that would upset Dalits in particular.

The overall reservation for OBCs is 27 per cent. This quota accomodates MBCs, or the most backward castes, and varies from state to state. What the committee is recommending is that the poorest Muslims like dhobis and barbers—being referred to as Dalits—should be accommodated in the MBC framework but not the SC quota. The reservation formula being suggested by the committee will have wide political acceptance. Even the BJP has stated that it is not opposed to Muslims being included among OBCs.

This recommendation is significant since there were some suggestions that the poorest Muslims be clubbed with Dalits. This would have stirred up a hornet's nest. Some Muslim groups like the Milli Council and Jamaat-e-Islami were, meanwhile, seeking a separate "Muslim quota". This too would have incensed the BJP. But the committee has taken the middle path on reservation, giving the government an opportunity to work out its own policy for Muslims. Says a source: "This is not a radical position since OBC lists already cover many Muslims."

The thrust of the panel's report is not just recommendations, but new, explosive and the most thorough data ever about the state of the Muslim community. Sources note that this data will have an impact on the next five-year plan. It could also reorient the thrust of schemes targeting Muslims. Education will be the main priority area for improving the representation of Muslims.

Besides non-representation in many sectors, sources say the report highlights that Muslims, despite being a largely self-employed community with many artisans and skilled workers, are rarely given credit by state banks or corporations. In other words, the community is largely adrift, left to fend for itself.

The committee was scheduled to submit the report to Prime Minister Manmohan Singh on November 17, the day after this magazine went to press. Leaks in the media have already revealed abysmally low representation of Muslims in all sectors. This had triggered a debate with some Union ministers suggesting that the so-called Dalit Muslims be included in the SC quota and backward Muslims in the OBC quota.

The Muslim community is itself grappling with contradictions on the reservation issue. Contrary to the perception that the ulema have a problem with caste reservation because Islam doesn't recognise caste, it has support from the Jamiat-Ulema-i-Hind, the most influential organisation of Deoband clerics. Its general secretary, Mahmood Madani, MP, told Outlook: "Islam is against caste. But Muslims still have caste divisions since 99 per cent of them in India are converts." Thus, Madani believes that "given the fact that Muslims have got no justice after Independence and lag behind in every sphere, there is no way out but reservation". So, is Madani recommending a separate Muslim quota? "If the government isn't for that, then at least there should be a block reserved in the OBC category only for the listed backward Muslims," he says. That is, a quota within a quota—as has been done in Karnataka.

Yet even if the government were to do this, one question lingers: whether states like UP would have backward Muslims educationally qualified to compete even for a reserved seat. The problem is complex since Muslims, besides caste divisions, suffer from huge economic variations within the community.

Even within the All India Muslim Personal Law Board, there is a great divergence of opinion on the issue. For instance, its member Kamal Farooqi says reservation is not the only solution. "I believe there is no point in giving reservation in jobs if you don't improve the educational levels," he notes, adding that a special educational thrust should begin in the 110 districts where Muslims constitute above 20 per cent of the population.

Yet Law Board spokesperson S.Q.R. Ilyas leans towards Muslims being granted reservation en bloc. "Caste should not be the criterion. It is the class nature of the community that should entitle them to reservation under article 15(4) and 16(4) of the Constitution," he says. But isn't a quota based on religion against the Constitution? "It was struck down in Andhra Pradesh because the approach was wrong. Muslims should get it on the basis of being backward but as a separate entity," he says.

Sociologist Imtiaz Ahmad is strongly opposed to this idea. "If there is en bloc reservation, an elite section would push out all the needy Muslims and defeat its very purpose," he says. Ahmad, who has done several field studies among Muslims, also doesn't support including them in the SC quota. Reason: "The level of stigmatisation and exclusion is not as severe as Dalits." He suggests that the OBC lists be reviewed and Muslims first seek reservation in education. "If Dalits are moving ahead in educational statistics, it is because they have seen the benefits of education. Perhaps some Muslim communities have not," he says.

The Sachar panel findings, unlike the case of earlier committees, don't face the prospect of burial or delayed release. The UPA government has no intention of hiding this report. Well-placed sources have told Outlook that the PM has already asked for a 1,000 copies to be made. After going through the report himself, he plans to distribute it among MPs and members of the Muslim community.