Under the agreeable chaos of democracy lies a silence of contradictions 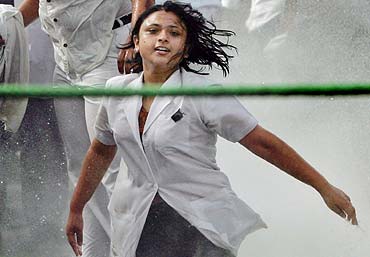 For decades since 1947, India's claim to be the world's largest democracy was flawed by failures pertaining to mass poverty and illiteracy. Today, though, these failures are not cited to contest that India is a democratic country, simply because of its achievements in other areas—which doesn't mean that India's democracy is doing just fine.

India has become a convincing democracy in the last 15 years for four reasons. First, the rule of law shows some resilience, though things are not perfect. Where else in Asia do the judges behave like those of the Indian Supreme Court? Where else does an election commission command so much independence and authority? The chief justices and the election commissioners were the politicians' favourite targets in the '90s, but this decade has generally been a turning point for the better: India needed Justice A.M. Ahmadi and T.N. Seshan. How deep would corruption have been otherwise? And how criminalised India's politics?

Second, freedom of expression has been preserved. Accustomed to its free press, India may not fully appreciate how precious an asset it is. In most of its neighbouring countries, journalists can't criticise the holy cows—the army, the president, the party—even though they are the principal players in the political game. While corruption, intimidation, and financial considerations are becoming increasingly pervasive in the Indian media, these haven't yet affected the diversity of opinions and the genre of investigative journalism.

Third, political power has become more deconcentrated than before. Till the 1980s, the Congress monopolised power, its domination undertaking an authoritarian overtone under Indira Gandhi. But now the states have greater autonomy; the principle of federalism is more effective, as evinced in the relatively fewer instances of the Centre now invoking Article 356. Also, alternation in power has become a reality. Though India has entered the era of coalitions, alliance partners stick together for five years, enabling the electorate to vote out the ruling coalition for a full five years.

Fourth, the assertion of the plebeians. For decades, India's democracy was dominated by elite groups of the urban middle class and the upper castes. Thanks to positive discrimination programmes, education, economic growth and the politicisation of the lower castes, the regime has now made room for rustic leaders who represent rural India. Had the state prevented the lower castes/classes from emerging, India may have countenanced an even more active Naxalite movement. True to Ambedkar's legalist approach of politics, the BSP and other Dalit and OBC-based parties play the election games, defusing social anger by redistributing power and spoils when in office. By democratising India's democracy, these parties have made the system more stable.

Democracy is never given in perpetuity; it's fragile by definition. Societies have to deserve and sustain it. India's democracy faces four major challenges, bringing into question its quality, if not its existence. For one, the middle class is losing interest in the democratic process. The rise of the plebeians has alienated sections of the upper caste/middle class, as has the politician's dubious profile. But the alienation also reflects the character of the middle class: it's more interested in shopping malls than in politics. Either because they are totally depoliticised, or think it's more useful to invest time and energy in NGOs, the middle class increasingly doesn't vote any longer. The question is: how does a democracy function when its elite groups don't vote? Badly. The middle class doesn't need to vote because it can fix things through a phone call—which is as much part of the corruption that it laments about—thereby rendering the regime less legitimate.

Second, a small bunch of experts takes decisions on major issues. In a functioning parliamentary system, public policies should be shaped by debates among MPs. In the last 15 years, India has changed its economic and foreign policies without much debate in Parliament. Be it the economic liberalisation of the 1990s, or the dramatic rapprochement with the US (earlier with Israel) now, Parliament hasn't really been able to discuss the modalities and implications of these shifts.

Third, multiculturalism may not be India's trademark any longer. Till the 1980s, secularism was one of the pillars of Indian democracy. Communalism, religious nationalism, etc were branded illegitimate. In the 1990s, India's political idiom began to accommodate many Hindutva-oriented ideas that nobody would have dared to articulate publicly before. No doubt, the bjp's defeat in 2004 has put a brake on this trend. Yet, Narendra Modi still governs Gujarat, the guilty men of Ayodhya and other riots remain unpunished, and the Muslims continue to lose ground.

Fourth, the promotion of democracy abroad is no longer India's systematic concern. Earlier, India actively sided with those oppressed by authoritarian regimes. Nehru took up the Palestinian cause as early as the 1940s; he welcomed the Dalai Lama in the 1950s; India's PMs, till recently, objected to the Burmese junta's treatment of the democratic opposition. Look at India's record in the 21st century—its PM abstains from Yasser Arafat's funeral, Tibetan demonstrations are suppressed during a Chinese official's visit to New Delhi, India has no qualms about the military regime in Myanmar. This founder-member of the NAM has, to a large extent, ejected its old worldview and adopted a realpolitik approach.

What does India stand for today: capitalism and power-for-the-sake-of-power? Earlier, this country used to sing a different tune, based on democratic ideals. I agree its earlier conduct did not pay off, and India started to be respected the day it became nuclear. But that should not prompt India to betray its deep-rooted values.