Now head of state, in 1947 he was one among the dispossessed millions. 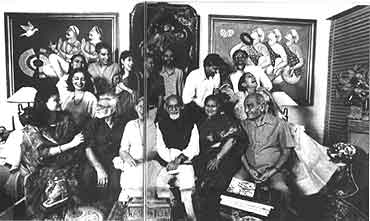 IN September 1947, as the riots worsened, my father decided to shift to India. We agreed to send the womenfolk by ship to Kandla. A fortnight later, they moved to Delhi. All we could rent was a one-room place in Karol Bagh. I went back to Karachi to, wind up. That's where I heard Nehru's 'tryst with destiny' speech, and of Gandhi's assassination. I was in a coffee house. My God! I can never forget that scene. Everyone had one anxiety, "Hope it wasn't a Muslim". Muslims sobbed. People to people, those are the things you remember.

Karachi was aflame by early '48. A friend, Raja Ghaznafar Ali, traced me to a hotel I'd shifted for safety, put me on a Delhi-bound plane. Thus I arrived, a refugee in India. Everything lost: my business in Karachi, our properties in Jhelum. We never anticipated such a rigid border. We thought it'll be easy. That's why the Partition hurt.

Delhi was hard. A Karol Bagh tongawala once mistook bearded Satish for a Muslim and refused to ferry him and my wife. Caused a near-riot. I had no vehicle, and would walk from Rohtak Road to Connaught Place. Later, at Babar Lane, we got two rooms. A demented widow was allotted the other two--bathroom and kitchen shared. She'd rave, rant all day. It was unnerving.

The '57 NDMC poll was my political debut. Unsure of my standing, I walked up to the panwala near our Hanuman Lane house saying, "Let's see if he knows me". He didn't. Crushed, I turned away, when recognition flickered in his eyes. "Of course, you are Naresh's father." Despite such dubious credentials, I won. Did I ever think I'd become prime minister? Never. That's the thing about India. Where else can a first generation immigrant become head of state?

Can India and Pakistan reunite? Impossible. History has moved differently for us. I don't wish it; it would be a grave mistake. Being good neighbours is enough.