Where animals and the wind run free, and comfort is not on tap 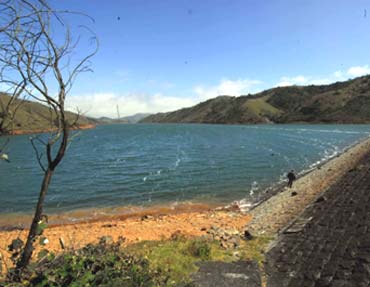 outlookindia.com
-0001-11-30T00:00:00+0553
Just as we are preparing to visit Mukurthi National Park, the wildlife warden of the Nilgiris, Rakesh Dogra, warns us on the phone that the place is not your typical tourist destination and the visitor should come with a different set of expectations. Soon after we’ve taken permission from the Ooty forest department and have set out for Mukurthi, I begin to understand what he means. The forest ranger advises us to take along a good supply of groceries. The forest guide, Saravanan, also has a word of caution for us, when we reach a small town off Avalanchi, about 28 km from Ooty: "This is the last township, pick up the supplies now, after this it’s just jungle all the way."

And yes, it is. After driving for close to three hours on treacherous roads, through tricky bends that make your head swim, we end up at a desolate, 1930s forest rest house, 2,231 metres above sea level. Musty, dank, well-stocked with candles, but boasting only one bulb powered with rationed solar energy. I begin wondering if this is a destination to be recommended to anyone.

We are at Bangitapal in the southern part of the reserve. I, Outlook’s photographer, two forest guards, a driver, a mass of vegetation around us, and presumably many animals—whom we can’t see in the thick darkness. For inspiration, we look up at the sky and that’s when we get our first real experience of what Mukurthi is all about. Every centimetre of the heavens above us is filled with stars. Not only is it the kind of sky you never see in the city, it is far more illuminated than the brightest I have ever seen, even in my own hometown Almora. I sleep with mixed feelings of expectation and uncertainty. 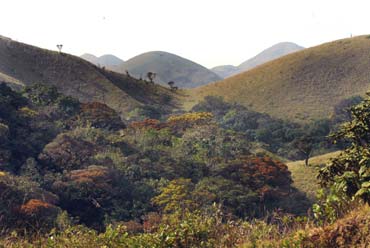 Sorry, no picnics The forest is home to pit vipers, wild boars, sambhar and elephants; below, the white kurinji flower

The next morning, as I peer out of the window at the mist-filled grasslands and rolling hills, the uncertainty begins to dissolve. All the beautiful sights that were just an expanse of darkness in the night open out wonderfully in the sun. We realise the forest rest house is in a magical setting—on the side of a delightful mountain called Madippu Malai, which looks like the folds of a sari.

Mukurthi is located in the southeastern corner of the Nilgiris, spreads over 78 sq km and is best known for the Nilgiri tahr, besides the Bengal tiger and Asian elephant. It’s one of India’s first biosphere reserves and is being considered for inclusion as a UNESCO World Heritage site. It was declared a sanctuary in 1986 and a national park in 2001. It doesn’t have the conventional ‘blue hills’ prettiness of the Nilgiris. Here nature is rugged and untamed. Hills have clouds hanging over them and as you wander around, the background score is provided by the wind whistling sharply in your ears. It’s not a place that has all the comforts on tap. Life is especially tough for the forest guards, who are constantly on the lookout for poachers and wildlife offenders. The area has eight man-made reservoirs, the largest being the breathtaking Upper Bhavani, spread over 10 km. But even the emerald green waters of Upper Bhavani are not limpid—you wonder what lurks below the surface.

The charm of Mukurthi is quite unlike that of Corbett, Ranthambore or any other wildlife reserve. Here the word ‘wild’ is taken rather seriously. It’s a zero-pollution, litter-free zone and no further development has been allowed here. It’s not the place to encounter families perched on elephants and jeeps crawling around looking for tigers and leopards. Visiting here is about quiet, discreet treks through the forests, encountering one little stream after another. There are pug marks of wild boars, sambhar and elephants everywhere. The forest is also home to pit vipers, several birds and butterflies. We get instant lessons in zoology and botany, courtesy forest guard Kannan. We stumble across the plant, Gaultheria Fragrans, that smells like Iodex and is used to make oil for treating joint pains. The most commonly found plant, however, is Rhododendron Nilgiricum. The white kurinji flower also blooms here, every year. We also learn why there are calcium deposits in tiger dung and not in leopard dung: unlike the leopard, the tiger feasts on the bones of its prey as well as the meat.

We are on the path that leads all the way up to the Silent Valley in Kerala. At one of the points on the way, called Labourside Viewpoint, you get fabulous views of the Mukurthi peak looking like the profile of a sleeping man, with chin and nose jutting out. The New Amarambalam Reserved Forest of Kerala stretches on one side. We are at the crossroads between Tamil Nadu and Kerala. As it turns out, Bangitapal means exchange post, it was a place where post from Calicut was sorted and then distributed in Tamil Nadu. Now it is seen as a transition point between Tamil Nadu and Kerala. What is fascinating is that nature seems to behave rather differently in both states. On the Kerala side, the mountain sports lush foliage, but on the Tamil Nadu side, it bears ‘shola’ shrubs, grass and the Himalayan variety of flora and fauna. The Tamil Nadu mountains are gentle and rounded, almost like a woman’s bosom, on the Kerala side they stand pointed and tall.

Mukurthi’s magic comes from the fact that humans haven’t defiled it. Fortunately, enough is being done to ensure that the magic lingers. You can only visit the place with permission from the forest department, or be part of the trekking expeditions organised every month by them. It’s worth it—there’s a rare sense of privilege in going where few humans have intruded. The only word of caution: stay away in the monsoon months of June-August.