Home  »  Magazine  »  Sports  » On Target »  In Western UP, Lies Nursery Of Indian Shooting

In Western UP, Lies Nursery Of Indian Shooting 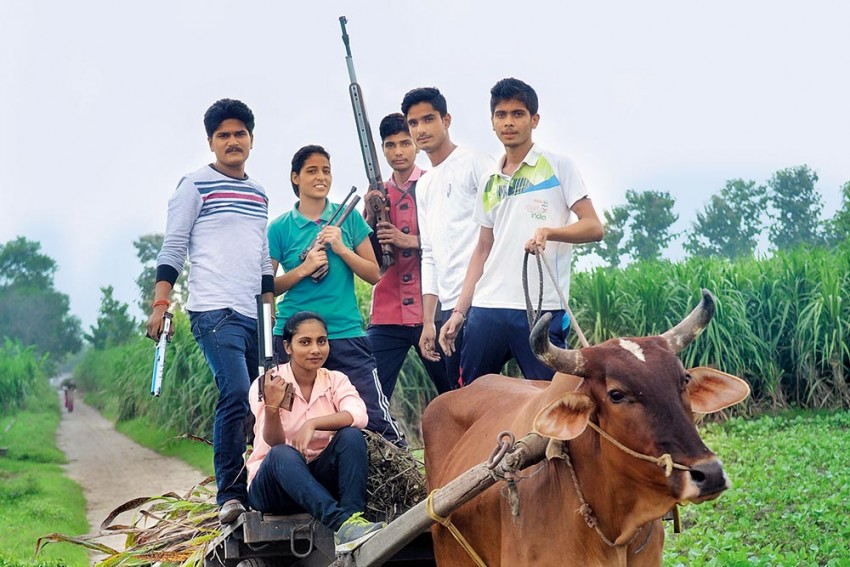 The cart weaves through sugarcane fields in UP’s Johri village; atop swagger some of its ace shooters with their guns
Photograph by Tribhuvan Tiwari
Qaiser Mohammad Ali September 05, 2018 00:00 IST In Western UP, Lies Nursery Of Indian Shooting 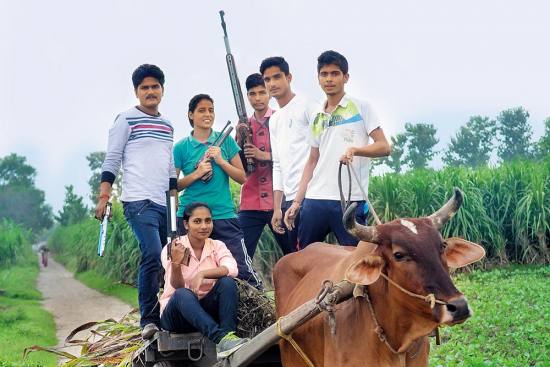 Morning shows the day, albeit symbolically at times. Ace rifle shooter Ravi Kumar, who opened India’s medal account at the just-concluded Asian Games, was obsessed with playing marbles and plying the handmade catapult that he used for killing birds. But one day, after his angry father destroyed a large earthen pot full of marbles the boy had won, an obstinate Ravi would only agree to go a rung up in shooting. The sceptical parents initially resisted the demand for a gun, but finally indulgence won over; they took a huge loan to buy the first gun for their only son. The rest can be counted in bulls eyes.

A solitary story of a village boy who went on to achieve internatio­nal laurels in the precision sport of shooting? Not quite. It holds true for many households in several districts of western Uttar Pra­desh that have produced prodigies in recent years. The fre­quency only seems to have increased, as proven by 16-year-old Saurabh Chaudhary, Shardul Vihan, 15, and Shapath Bharadwaj, also 15. The teenagers have set the bleachers ablaze. And there are more prodigies waiting in the wings, eager to take flight.

Saurabh, who had broken the world record on his way to gold at the Junior World Cup in Germany, became the toast of India after creating a titanic upset at the Asian Games. Based in Kalina village of Meerut district, he clinched the 10m air pistol gold, sho­cking a rich field of world and Olympic champions. 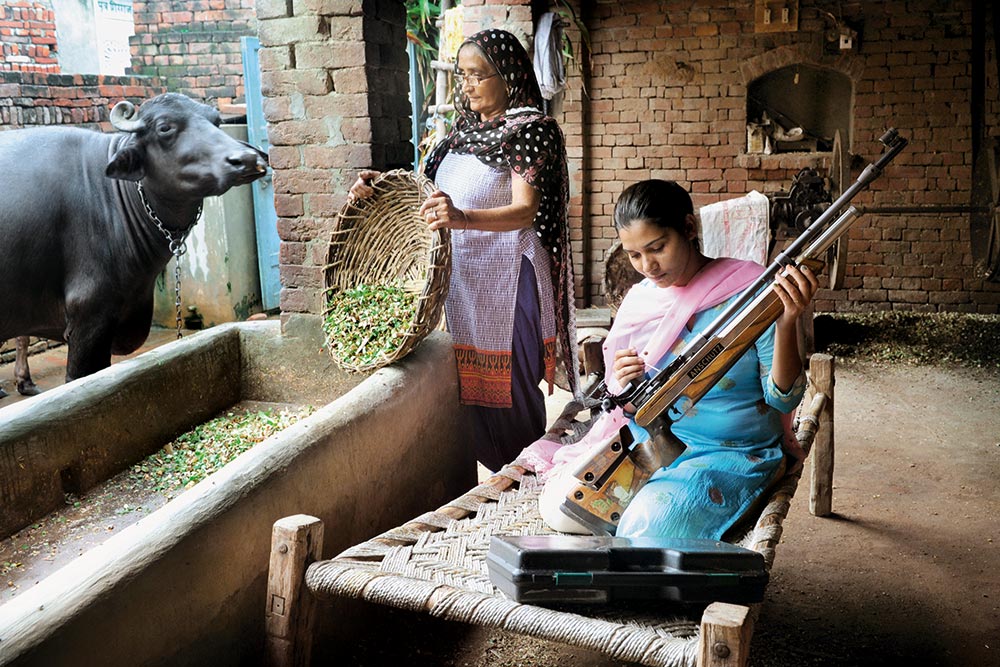 In some homes in Johri village, cleaning a rifle, as Deeksha does here, is a daily chore

Shardul’s upset silver-winning performance in the demanding double trap event was no less creditable. The supre­mely confident Meerut boy, who switched from cricket to badminton and finally to shooting in the past couple of years, came out with his gun blazing to beat a roster comprising competitors double his age.

Shooting being popular is a legacy of the gun culture. In Baghpat, it has brought down ‘eve-teasing’; in Meerut, the crime rate has fallen.

What is the secret behind a handful of western UP districts producing champions in a frequency unparalleled in India? There are seven districts—Baghpat, Mee­rut, Muzaffarnagar, Shamli, Buland­sh­ahar, Aligarh and Bijnor—that are the origins of shooters, boys and girls.

Several reasons are cited. The primary one is that historically, people here were fond of hunting and that affinity with guns continues. The proximity of this belt with Delhi, where world-class facilities are available at the Karni Singh Shooting Range and at private academies, is another significant rea­son for the sport of shooting to strike deep roots.

Hunting in India was prohibited with the promulgation of the Wildlife (Prot­ection) Act, 1972. But it continued desultorily till 1982, when it was banned com­pletely. The sport of shooting, ado­pted thus in compensation, was taken up in earnest. Out of the 28 shooters who com­­peted at the Asian Games, six were from western UP. They won three medals, including Saurabh’s priceless gold, out of the nine India shot down in Indonesia. 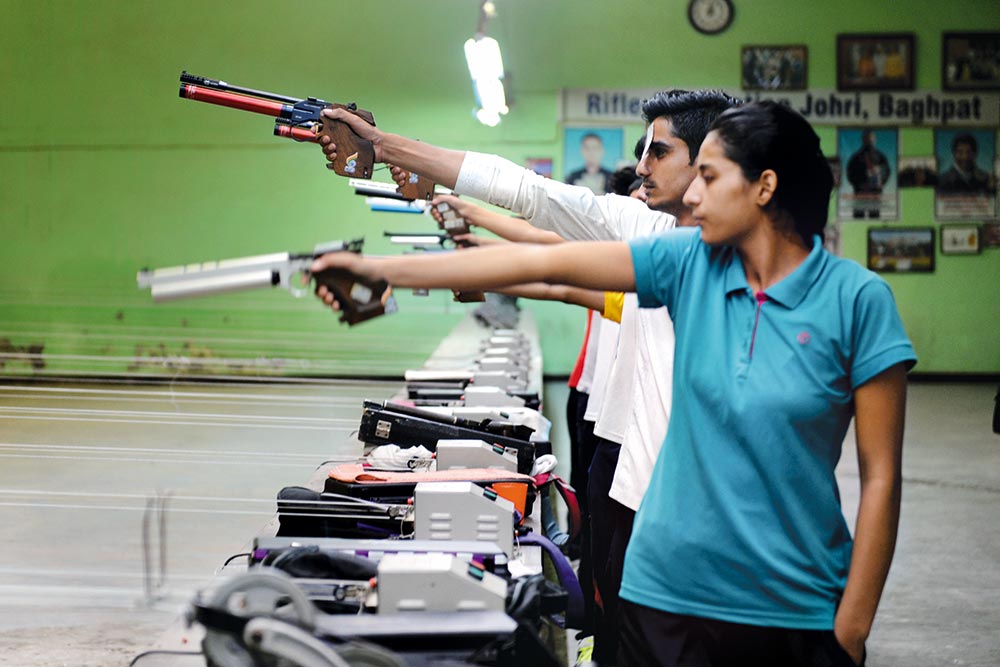 Many years after the Meerut District Sho­oting Association was formed in 1954, a renaissance of sorts began when Mor­aad Ali Khan, a seven-time national cha­m­pion, helped India win its first ever int­­­­­­ernational shooting gold, in trap, in 1995, in Chengdu, China. Khan was a pion­eer of the sport in India, winning int­ernational laurels with his blazing Per­a­zzi, inspiring youngsters. Indian shooting, particularly in Meerut and the adjoining ones, has not looked back since.

“Gun culture is not alien to western UP. For years, annual shooting competitions have been organised in melas (fairs) in these districts. The hunting culture may be over but people still own weapons. The present rate of India’s success in shooting is the transformation of that legacy,” Khan, who belongs to Jan­sath town in Muzaffarnagar district, tells Outlook. Khan heralded a golden cha­pter of Indian shooting that includes Anwer Sultan, Mansher Singh, Union spo­­rts minister Rajyavardhan Singh Rat­h­ore and Man­avjit Singh Sandhu—all trap experts.

Olympian Sultan, also the coach of Sha­rdul, comes from Shamli. “After Moraad and I won medals at the international level, awareness about shooting spread rapidly. Also, since people in this belt are financially well off, parents can afford to spend on shooting, an expensive sport. Ano­ther advantage for shooters of this area is that they can go to Delhi for training at the world-class Karni Singh Range, which is just a one-and-a-half-hour drive from Meerut and Shamli,” he says.

The other benchmark event came when Rajpal Singh, a former India shooter, launched a 10m shooting range in 1998 in Johri village of Baghpat district, known for its notorious gun battles. Interestingly, the academy started at the residence of veteran Urdu journalist Mansoor Agha, next to a masjid, before it was shifted to the indoor academy, its present location, in 2015. “Between 1995 and 1998, the ‘katta’ [countrymade gun] culture was at its peak in Baghpat, so I opened the range to channelise their energy for constructive sho­o­­ting. No one who took to the sport has gone astray. Johri has produced 10 international and 41 natio­nal-level shooters. I’m trying to produce Eklavyas, and not Arjunas,” Rajpal, who also coached Rajiv and Rahul Gandhi, tells Outlook. Agha chips in: “Shooting has bridged the communal divide and encouraged Hindu-Muslim bonding.” 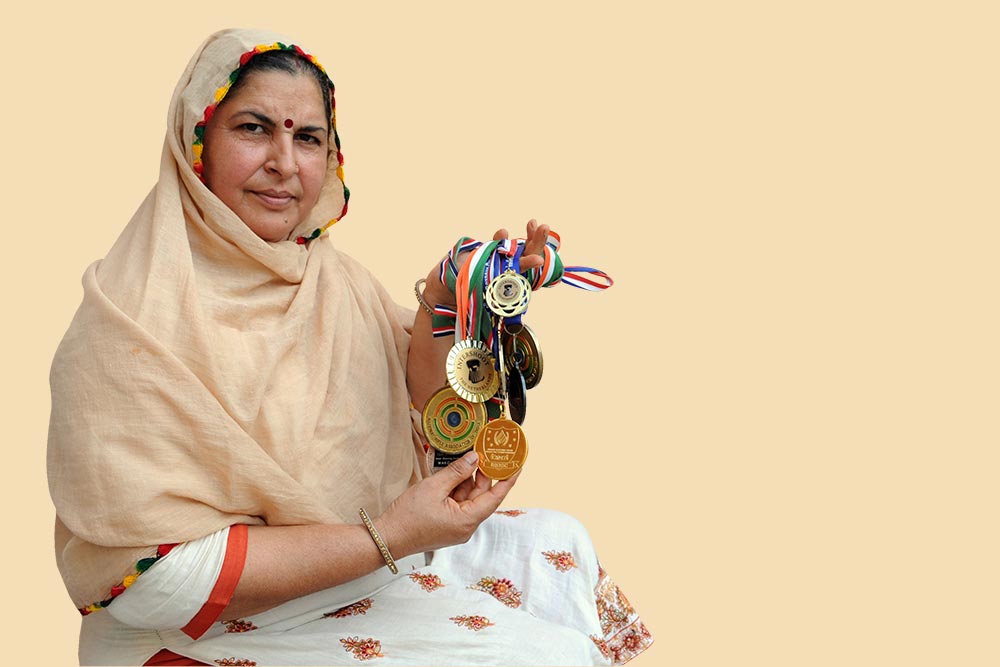 Ravi Kumar’s mother Ieera Rani with some of his medals

Among the outstanding products of this academy is Ravi Kumar, who, along with Apurvi Cha­ndela, won bronze in the 10m air rifle mixed team event at the Asiad. Others are  Seema Tomar, Akhil Sheoran, Varsha Tomar and others. “Shooting has become so popular in Baghpat that today 30-35 shooting ranges are operating in the district. Baraut tehsil alone has 15 ranges. One welcome social change brought about by this is that incidents of eve-tea­sing has come down,” says Neetu Sheoran, the coach at Rajpal’s academy.

Other districts certainly don’t lag behind. In Meerut city, there are 10 academies, some of them in schools, informs Vivek Atray Sha­rma, a qualified coach who runs one. “Shooting is an easy sport, in the sense that it has less chances of injury, unlike sports like kabaddi. Due to many people learning to shoot, the crime rate has come down, something that the police also appreciate,” he says.

Deepak Vihan, father of Shardul and a real estate businessman in Meerut, echoes the general belief: “In western Uttar Pradesh, Jats and Mus­lims are large population groups and both have had an attachment with weapons. So, that love continues in the form of shooting.” Jagmohan Chaud­hary, father of Saurabh, feels that cre­dit for shooting’s popularity should go to the never-say-die spirit of its practitioners. “They are hardworking kids and don’t shirk a day’s toil. It is god’s grace that this region has produced so many good shooters. But the government should bring in a policy for those who miss studies due to shooting. Such shooters should be given an opportunity to earn a degree. Good shooters will get job offers, but what about education?” wonders Chaudhary, a farmer.

Shapath Bharadwaj, who won the double trap team gold at the 2017 Junior World Championships, is another teenaged prodigy from Meerut from whom much is expected. “It is a kind of investment, spending on your kid. And the kids do work hard. For example, either his fat­her or I drive him down to Karni Singh Range in Delhi from Meerut and back the same day. He would change clothes, eat and even study inside the car,” says his mother Swati Sharma about her son whose shooting talent was spotted by ren­owned shotgun coach Sualeyheen Sheikh, a former national-level shooter.

It’s not just boys who are taking aim from these seven districts. The girls are matching them shot for shot, as witn­es­sed at Rajpal’s academy in Johri, tho­ugh Neetu Sheoran points out pare­nts are still reluctant to spend as much on girls as on boys. Yet, as seen in India’s Asian Games campaign, one would rule out girls at one’s peril. And, even as you read this, more gifted shooters walk across the lush green fields, rif­les on their young shoulders, their sights fixed on the col­oured, concentric circles that await them invitingly at the end of the range.

By Qaiser Mohammad Ali in Baghpat and Meerut