In upper Assam, a PSU giant helps the youth get back on their feet 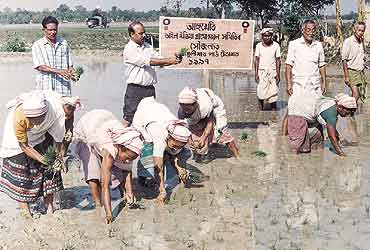 outlookindia.com
-0001-11-30T00:00:00+0553
Manimanik Gogoi was like any other youth in Assam, a graduate from a small-time college looking for a non-existent government job, hanging around with friends all day and heading a youth group called Dighalia Yuvak Sangh. That was till he stumbled upon an innovative programme run by corporate giant Oil India Ltd. Three years after he reluctantly started working on the piece of land his father owned, Gogoi is grateful that he decided to switch to farming rather than wait endlessly for a job. Now, besides earning a decent living, Gogoi is his own boss.

In the past three years alone, at least 1,000 unemployed youth have taken to agriculture thanks to an Oil India self-employment initiative that started off as an experiment but has now become a social movement of sorts. The youth are now increasingly taking to self-employment in oil’s area of operations with the company’s Area Development Scheme.

Till ’98, growing unemployment and the resultant exodus of youth to the militants’ ranks had created tremendous pressure on organisations as well as the government in Assam. There was an urgent need to create more employment but with increasing competition and few industries, jobs were drying up. Under the circumstances, profit-making PSUs like OIL were looked upon as a last resort by many educated and semi-educated youth, especially the people living in oil’s area of operations in the upper Assam districts. Bandhs and blockades by people demanding jobs and/or doles from the company used to be a routine affair. But not anymore.

Says S.N. Borah, GM, administration, at the oil HQ in Duliajan, "Our aim in launching the Area Development Scheme was to help in creation of wealth. Since we operate in an area beset with problems like growing unemployment and insurgency, we had to break away from the typical PR strategy adopted in the earlier days...when you donated money to various individuals and organisations and thought that your responsibility ended there."

The scheme aims at a sustainable development model and provides an alternative means of livelihood through skill-enhancing training, handloom and handicrafts production facilities, training to small and marginal farmers in modern agricultural practices and modern teaching techniques for rural teachers.

Having identified the basic thrust of its social welfare policy, oil’s PR department headed by Prasanta Borkakoti zeroed in on Shalmari, a backward area, not very far from its headquarters. A known breeding ground for militants, Shalmari was a major challenge. Since agriculture is the mainstay here, the company adopted Shalmari as a model village under the Oil India Rural Development Society through which systematic training in modern agriculture practices like multi-cropping and use of high-yield seeds was imparted.

Says Borkakoti, "Since the locals continue to look up to oil for a livelihood, we thought it better to invest in projects that would help generate self-employment avenues." One such project was the establishment of the handicraft training-cum-production centre. The company invested in procurement of raw materials, paid the instructors’ fees, repaired the machines and helped train successive batches of skilled weavers, especially women. Around 400 women have benefited till now.

oil has spent over Rs 5 crore in these projects in the past couple of years, and feels the money has been well-invested since the returns have been well beyond its expectations. As a senior manager put it, "Ten years ago, the slogans on the walls of oil installations used to read ‘Oil India go back’. Today, the same people are writing ‘When oil grows, we grow’."

In A Sex Warp

Nitin A. Gokhale Making A Difference