In Time For The Spring Meltdown

In the remote arid regions of Ladakh, the only way to store water for the sowing season is to make a glacier 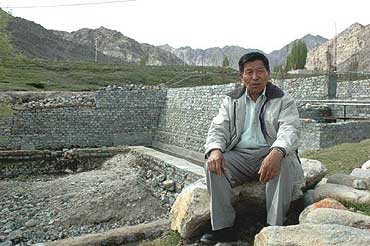 outlookindia.com
-0001-11-30T00:00:00+0553
He is better known as Ladakh’s glacier man. Someone who makes artificial glaciers in winter so that villagers can get water in summer for their fields. Chewang Norphel, an unassuming retired government engineer in Leh, understands Ladakh’s acute water scarcity. "While in the state’s department for rural development, whenever I toured villages, a constant refrain from the people would be for water," he says.

Tucked between China and Pakistan, this is one of India’s remotest—and driest regions. It has a short summer and farmers must sow their crops in April-June. Norphel’s artificial glacier enables them to get water a full month before the snow starts melting on mountain tops.

How does one go about making an artificial glacier? No crops are grown in Ladakh’s severe winter season and the little water in the mountain streams generally goes waste. Norphel hit upon the idea of diverting this water to a convenient spot with the help of pipes. Mud bundhs are made at intervals on the hillside to enable the water to accumulate.

The diverted water freezes in winter, and a small glacier is thus formed at a relatively lower height—between 13,000 to 14,000 ft. "Being lower in altitude, generally four or five km above the villages, this melts in spring, just when the sowing season starts," he says. This is particularly useful since the sowing season ends before the natural glacier water begins to flow down. Norphel’s glaciers are about two km long and 150 feet wide with depths ranging from three to 11 ft. They are low cost and require only local labour. Norphel’s first glacier at Phuktse village cost just Rs 19,000. Another one near the Changla Pass is bigger and cost Rs 60,000. So far, Norphel has made about half a dozen such glaciers in Ladakh, using funds from the state’s watershed development programme.

Money is scarce not because of shortage of allocation but because of slow disbursal. "I’m getting requests from more and more villages, but I’m hampered due to lack of funds. Even if the allocated funds are released on time, it will be enough, but sadly, even that is not happening," he says dejectedly. His original concept also needs some fine- tuning because, over a period of time, he found that chunks of ice blocked the flow of water to the bundhs.

Skarra, a small village on the outskirts of Leh, is home to Norphel. He is now in the process of damming the small snow melt stream which flows through the village. He is also the chief project officer of Leh Nutrition Project, a Ladakh-based NGO which is currently executing low-cost water harvesting projects in two watersheds of Leh and Durbuk blocks.

Blood Bath For A Stale Loaf