The Congress going it alone is a make-or-break project 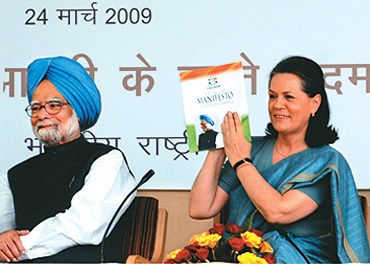 "...only the Congress...is anchored in the larger vision of India as a nation, while being sensitive to regional and local sentiments." —Congress manifesto, 2009

Competing visions of nationalism may separate the Indian National Congress from its arch rival, the Bharatiya Janata Party, but in 2009, the two parties appear to be united in their common resolve to rid the electoral arena of small parties with big ambitions. They would prefer to see the political parties in the ever-expanding Left-led Third Front either gravitate to the Congress camp or be herded back into the BJP enclosure. They want this election, and if not this one, at least the next election to be a straight contest between the Congress and the BJP.

A senior Congress functionary described the current elections "as a turf war" between the party and the Third Front. Union external affairs minister Pranab Mukherjee, who was officially fielded to attack the Third Front, stressed that it only spelt opportunism and instability....