In The Reign Of The Headless Horse

Disband the Sangh parivar's extra-governmental militias, or we could be heading the way of Zia-ul-Haq's Pakistan. 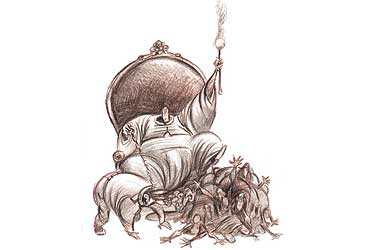 illustration by Jayachandran
Amitav Ghosh May 13, 2002 00:00 IST In The Reign Of The Headless Horse

outlookindia.com
-0001-11-30T00:00:00+0553
The recent carnage in Gujarat is not just a fresh chapter in the subcontinent's annals of horror: it may well prove to be the prologue to horrors yet-undreamt-of. In the aftermath of the slaughter, it has become clear that the machinery of state and possibly even the financial apparatus of the commercial world were bent to the task of instigating and supporting mob violence. In other words, two of the most important forces of order in society were turned to exactly the opposite purpose: undermining peace and promoting violence. This is a grim augury for the future, and it has been made grimmer still by Prime Minister Atal Behari Vajpayee's speech in Goa. In endorsing the action of the Gujarat mobs and in demonising an entire community, he has essentially abdicated the Government of India's claim to sovereignty in administering justice. This is an outrage; a clear and culpable dereliction of duty on the part of the BJP-led government and the prime minister himself.

There are certain obligations of governance that admit of no dilution for ideological purposes: they are binding and absolute. The first of these is the obligation to maintain the rule of law. The appropriate response to the atrocity at Godhra would have been to prosecute the perpetrators to the fullest extent of the law: indeed they deserve the most extreme punishment that is legally available. But in choosing instead to encourage retribution through mob violence, the government has permanently endangered all its citizens, including those whose interests it endeavoured to advance. Consider for example, the attacks on Muslim-owned businesses. The thugs who carried out these attacks may well have believed, in their criminal folly, that Hindu businessmen would profit from the liquidation of some of their competitors. But these actions have actually endangered businessmen of all communities: the true minority in India are the rich and the propertied and attacks such as these only serve to increase the vulnerability of everyone who is engaged in commerce. If one group of businessmen profits from the forcible elimination of their competition, then it will not be long before they too are eliminated by others seeking to take this easy road to success.

Secondly, a modern state is by definition under an obligation to establish a monopoly of sanctioned violence within the territory under its control. Any state which attempts to dodge this obligation, for no matter what purpose, does so at its own peril. There is no better illustration of this principle than the fate of our neighbour, Pakistan. Zia-ul-Haq attempted to tighten his grip on power by creating extra-governmental militias: in the end this policy undermined the very foundations of the Pakistani state. To a greater degree than any other political coalition in India, the Sangh parivar is dependent on extra-governmental militias. The events in Gujarat demonstrate more forcefully than ever why it is imperative that the Sangh parivar's militias be disbanded. If not, sooner or later these groups will pose a direct challenge to governmental authority: this is amply borne out by the experience of Pakistan.

Finally, one of the least remarked but most important foundations of government lies in the ethical authority that is vested in it. Citizens look to their government not only to maintain order and deliver goods and services, but also to serve as a forum for the conduct of a collective ethical life: it was in this sense that Hegel called the modern state a 'conscious ethical institution'. This unacknowledged duty is in fact one of the invisible pillars of legitimate government: it was precisely on ethical grounds that Mahatma Gandhi challenged, and eventually toppled, the British Raj. In publicly endorsing the actions of a mob, the present government has undermined the Indian state's ethical claims to legitimacy.

These are three foundational aspects of statecraft and their exigencies bind all governments, irrespective of party affiliation. That incumbents in power should differ in their political beliefs is an inevitable fact of democracy. I, for my part, disagree utterly with the BJP's view of Indian history and its opinions on the role of minorities in India. Yet I accept that in a country as large and as varied as India, it is not just inevitable but necessary that there should be many contending points of view. However, the basic responsibilities of government allow no such room for dissension: they bind all incumbents, irrespective of their beliefs. In betraying these fundamental principles of governance, the prime minister and the BJP have undermined the foundations of the Indian state and permanently endangered all its citizens.

It would be some consolation if the Congress could be relied on to chart a different course. Yet no one who was in Delhi in the aftermath of Indira Gandhi's assassination in 1984 will be sanguine in this regard. Then too, an act of hideous and inexcusable violence was used as an alibi for a programme of mass murder; then too, the machinery of the state was used not to impose order, but rather as an instrument for the incitement of violence; then too, the police and the army stood by while mobs of red-eyed men roamed the streets of the city, armed not only with knives and swords, but also with electoral rolls and lists of minority-owned houses and businesses. Some of the Congress' most prominent leaders, including Sonia Gandhi, were in Delhi at that time: neither by word nor deed did they act to contain the violence. These leaders also bear the taint of complicity with the mob. Yet, it ought to be noted that the Congress, even in its most benighted days, never sought to provide a public endorsement of the actions of the mob. It is also true that the Congress has never been dependent on organised militias in the manner of the BJP and the Sangh parivar. The Congress is today the only entity that could effectively challenge the BJP and offer an alternative vision of nationhood: it is nothing less than a national tragedy that it should be saddled with a leader who, in M.J. Akbar's phrase, is effectively the 'insurance policy' that ensures the BJP's continuing grip on power.

The bleak reality is that politicians of all stripes will occasionally succumb if the temptations of mob violence are strong enough. This is why the time has come to create an institutional barrier against this by establishing an independent commission for riot control, on the model of the Election Commission and other autonomous bodies. Such a commission, equipped with the authority to over-rule the local administration and armed with the power to deploy military and paramilitary personnel, could well be the only means of preventing a recurrence of the Delhi riots and the carnage in Gujarat.

One moment from November 1984 remains particularly vivid in my mind. One afternoon, when the Delhi riots were at their worst, a peace march was organised by the Nagarik Ekta Manch, a relief organisation of which I was a member. Somewhere inside Lajpat Nagar, we found ourselves facing a crowd both larger and more determined-looking than any of the others we had encountered. When these men began to advance on us, brandishing their knives and steel rods, the women in our group stepped out and surrounded us. In the face of their resolution, the mob dissolved. The thugs faltered, confused by the unfamiliar situation, and a moment later they were gone. I was reminded of this when I saw a picture, soon after the Gujarat carnage, of a chain of women on a street in Hyderabad, holding back a mob with their joined hands. In the midst of this horror, it is some reassurance that civil society in India is finding new weapons with which to combat state-sponsored violence.

"I Am Very Impressed With Ganguly"