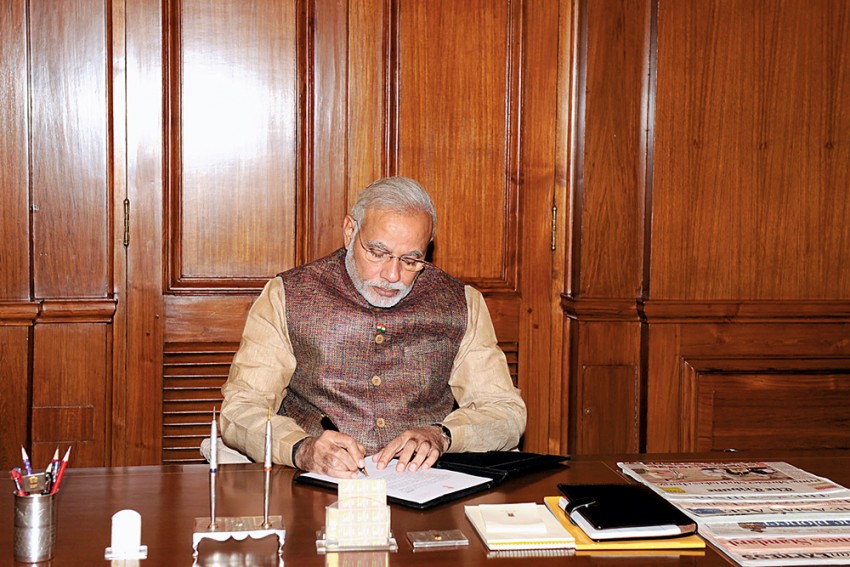 All In A PM’s Work
Brand Modi is unscathed even after three years and may, in fact, have gained some extra lustre
Bhavna Vij-Aurora March 17, 2017 00:00 IST In The Mood For A Desi Robin Hood 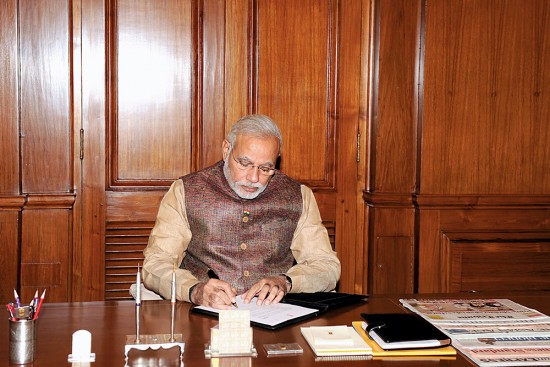 By noon on March 11, a few days before the spring equinox, the tidings were clear: the BJP had ­reconquered Uttar Pradesh after a decade and a half. It was a win of never-before, tsunamic proportions, and the numbers rolling off media screens sparked frenzied discussions among pundits and laypeople alike. India’s future political course seemed to have shifted decisively to a well-defined groove. For PM Narendra Modi, however, after a punishing schedule of 24 rallies across the state, it was a day at work as usual.

The PM sat in his South Block office, busy enquiring about the Maoist ambush that morning in Sukma, Chhattisgarh, in which 12 CRPF personnel had been killed. He sought an update from home minister Rajnath Singh and asked him to rush to the spot and take stock of the situation. He then spoke to National Security Advisor Ajit Doval and Chhattisgarh chief minister Raman Singh, questioning their claim that Naxals were down and out following demonetisation.

Only then did he turn to the epochal business at hand. He called up party president Amit Shah, his trusted strategist and micro-manager par excellence, and congratulated him for successfully navigating UP’s tricky political waters. The conversation was brief, say sources, and Modi urged Shah to keep the celebrations muted. It was only the next day that the triumphal march happened. It was just 200 metres to the BJP headquarters, and Modi strode, his light beige achkan-and-jacket making for a stark visual contrast against the grey and black of security personnel, very much the colossus.

According to a PMO official, Modi has been extremely focussed on ­“unburdening” the middle class, ­besides keeping the thrust on schemes for farmers and the poor.

As ecstatic party workers showered rose petals while he arr­ived at 11, Ashoka Road, it was clear that Brand Modi was ­uns­cathed even after three years­ and may, in fact, have gained some extra lustre. Strikingly, albeit counter-­intuitively for many, his risky demonetisation gambit­—wrapped in a her­oic narrative—had paid dividends. As some placards put it, “Desh mein hai BJP ka mood, Modi hai hamaare Robin Hood.” Self-explanatory, even without a translation.

Now with his ascendancy established, Modi was free to elaborate on his idea of a New India. The word ‘gareeb’ (poor) was one of the first uttered by Shah as he opened the event. A party leader on the sidelines mentioned the vision of Vivekananda, Aurobindo and Gandhi. On the stage, Modi spoke of economic realities, the aspirations of the poor, the burden on the middle class. He laid out the roadmap for his government in the remaining two years and beyond until 2022, when India marks 75 years of freedom. Outlook spoke to several BJP leaders, officials in the PMO and the government to find out how this mid-term victory will help Modi and how he sees the reforms agenda in front of him.

BJP Rajya Sabha member Bhupender Yadav, who coordina­ted the party’s campaign in UP, says the reforms would be in keeping with the trend established in the past three years. “Let’s call it J-A-M. The ‘J’ is for Jan Dhan Yojana, which symbolises the use of the country’s financial institutions to empower the poor. ‘A’ is for Aadhaar, with its focus on del­ivery of services and stopping leakages to ensure benefits are going to the right people. ‘M’ is for Mobile…we plan to encourage the use of mobile and digital technology for more transparency and easy accessibility of government services. It also goes with the government’s pledge to move towards a cashless society,” Yadav explains. Across policies, the thrust would be on outcomes and delivery of services, confirms a PMO official. Schemes such as Ujala, Ujjwala, Mudra and Jan Aushadhi Yojana, which would have played a positive role on the ground unbeknownst to critics, would be expanded.

Aadhaar, he says, has emerged as the master key in stopping leakages in the system. “The ­total savings because of this in the past two and half years have been more than Rs 49,000 crore. And this is only from the few welfare schemes where Aadhaar has been implemented,” the official says.

With 112 crore people covered under Aadhaar, it’s being showcased as an important tool of transformation, good governance and empowerment. The idea now is to expand its footprint until each and every person is covered and benefits under all schemes, including the Integrated Child Dev­elopment Scheme (ICDS), accrues through Direct Benefit Transfer, like it happens in LPG subsidy, scholarships, ­NREGA and pensions. With ICDS, sceptics have been pointing to the risk of mid-day meal schemes being turned into a monetary benefit delivered to parents, but the government is bullish about the idea of maximising efficiency through better targeting, as it says has happened with the PDS.

The Class in the Middle

The PMO official, who spoke on the condition of anonym­ity, underlines the thematic focus. The way forward, he says, was clearly delineated in the last two budgets: the thrust was firmly on schemes for the poor, farmers and the ­middle class. According to him, Modi was extremely focused on “unburdening” the middle class that has been bearing a lot of financial pressures. 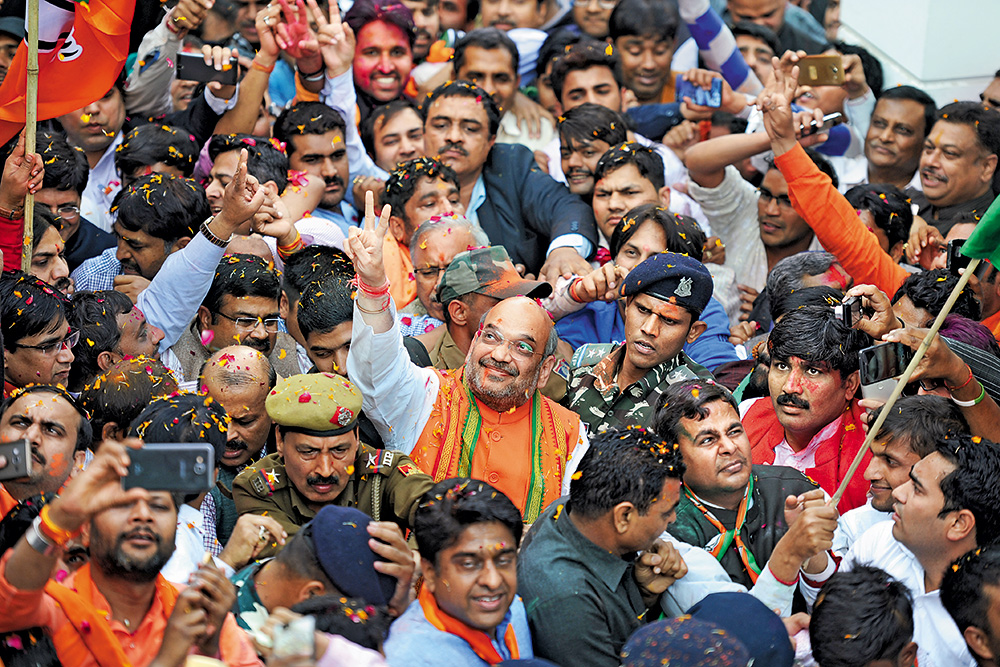 All the diverse strands are interconnected, he says. “The benefits of demonetisation will start showing hopefully with a shrinking parallel economy. The Benami Property Transaction Act is being used not only to attach immovable property, but also to trace cash deposited in various accounts after demonetisation. The effort is to go to the source and eventually bring in more high-earning individuals under the tax net. This will reduce the tax burden on the middle class in the next two to three years,” the official adds.

Vijay Chauthaiwale, who played a crucial role in the BJP’s 2014 Lok Sabha election campaign and now heads the ­party’s foreign cell, believes reforms are a continuous process. “As development percolates down to the poorer sections and the middle class, the existing lines of caste and religion become smaller. This was seen in the UP results where the BJP managed to consolidate the aspirational classes cutting across caste and religion,” he tells Outlook.

Constituency-wise analyses show the BJP won 31 out of 42 seats in UP where the Muslim population is more than one-third of the total—that’s a 74 per cent success rate, and everyone has seen a swirl of theories trying to explain the unexpected data set. Muslim votes being split between the BSP/SP accounts for a bulk of them, but Rajendra Pratap Gupta, who wrote the BJP’s election manifesto and worked in Modi’s constituency Varanasi, says he wouldn’t be surprised if many Muslims had voted BJP.

“The triple talaq issue is very serious and definitely strikes a chord with Muslim women,” he says. “In my interactions with the community in Varan­asi and elsewhere, I realised many men too were not in favour of triple talaq. The BJP rightly brought up the issue.”

An advisor to the Union hea­lth minister, Gupta says major health sector reforms are in the offing, including bringing down the prices of stents.

Recently back from Israel, Chauthaiwale says the PM’s boldness was seen in dip­lomacy too. “In July, he will bec­ome the first Indian PM to visit Israel,” he says. “It will be a ­defining moment in our relationship with West Asia. His visit will seal the 25-year-long friendship between India and Isr­ael. We were collaborating with Israel on various issues, but there was always a hush-hush element to it. There is no need to be coy about our relationship anymore.”

Party spokesman G.V.L. Narasimha Rao too believes the unprecedented victory in UP could help unsheath more ref­orms. According to him, besides demonetisation and the benami property law, the roadmap includes reforms in the banking sector that still has to find a way of dealing with NPAs. Reforms in land acquisition and labour too are a priority, he says. The government’s older moves on land acquisition had hit a roadblock in the Rajya Sabha earlier.

That brings us to the one sphere the BJP would dearly wish it could cast in a desired shape: the Upper House. A Union minister tells Outlook that the UP victory alone does not mean PM Modi will now have a free hand. “The Opposition may just gang up. The BJP won’t have a majority in the ­Rajya Sabha until next year, and that too barely. Reforms can be unshackled only when the party gets a majority in the Rajya Sabha too,” he says.

The geographical base can expand only with a social outreach, says a BJP MP. The effort to strengthen the party’s social base proved successful in UP, but that was only a small step.

For many of the reform measures and legislations like GST and land acquisition, the states too need to be brought into a cooperative zone. “The natural course of action will remain unfinished, the government will have to make com­promises. It was a travesty the way the Land Acquisition and Rehabilitation Bill was stalled in the Rajya Sabha.  It was a great disservice to the nation to not allow a reasonable bill to go through. How will you ever get investors to Make in India?” asks the minister.

For overarching projects like Make in India, Digital India, Swachh Bharat and Namami Gange, the consent and cooperation of states are imperative, the minister points out. “Now, with a BJP government in UP, a project like Namami Gange will take off. Governance that affects the day-to-day lives of people is mainly at the levels of state, district and panchayat. The big picture has no meaning without the nuts and bolts,” he says.

The BJP’s own growth, therefore, becomes an enabling factor, according to the minister. Which is why Amit Shah is now working towards expanding the BJP in states where it doesn’t yet have a footprint and the organisation is weak. In addition to Gujarat, Himachal Pradesh and Karnataka—states where elections are due next—Shah’s focus is on 120 Lok Sabha constituencies where the BJP has little or no presence. They are calling it the Coromandel Plan.

Bhupender Yadav says the geographical base can expand only with a social outreach. The effort to strengthen the ­party’s social base proved successful in UP, but that was only a small step. The plan is to extend its presence and put down roots in five states—Tamil Nadu, Kerala, Telangana, Andhra Pradesh and Orissa, in addition to West Bengal and the ­remaining parts of the Northeast.

A senior party leader speaks of Shah’s single-minded ­determination to strengthen the BJP in these states. “Once government formation is done in UP and Uttarakhand, and the CMs are in place, Shah plans to travel extensively to these states and start building the ­organisation from scratch, right from the booth level. His itinerary is already being drawn,” the party leader says. A good showing in Orissa’s ­local elections has sent positive signals and now the idea is to ­replicate it in the other states.

“It’s imperative for the BJP to expand its base all over India if the PM’s vision is to be implemented. UP is not the end. Koi vijay antim nahi. Kshitij ki tarah badalti jaati hai (No victory is the last. The target keeps shifting, like the horizon). ­Reforms and progress will continue,” Yadav says. It’s not an experience that comes to the static. One has to be on the move: only then does the horizon move.