In The Line Of Fire

Why does a forest in Kashmir catch fire? Well, even peacetime looks like war in the border areas. Artillery fire from across, and our own firing ranges, constantly singe the woods. 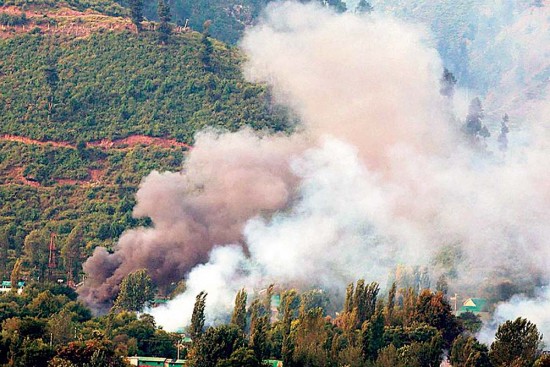 Forests catch fire for many reasons, but near the Line of Control (LoC) in Jammu and Kashmir, there is an additional factor: routine cross-LoC shelling that has long been a marker of strained Indo-Pak relations in these parts even when the two countries are not at war. No wonder, not just people living close to the LoC but also the forests breathe a little more freely when the mortars fall silent. And the mortars have ind­eed been silent since the two neighbours agreed to a “strict observance ceasefire” in February. Earlier, according to forest officials, mortar shelling was leading to frequent forest fires.

“Forests in areas like Saidpur and Badar Kot used to catch fire due to ­regular shelling, and the fires were ­difficult to extinguish amid continuous shelling and firing,” says an official. Until last year, there were fires every year in the forests along the LoC ­during summer, especially in the Nowshera sector of Rajouri district and Karnah sector in Kashmir—all ­attributed to cross-LoC shelling. In May last year, a massive fire engulfed a large forested stretch at Mendhar in Balakote sector of Poonch district. Exploding shells caused the fire, which, in turn, triggered several ­landmines that had been planted to ­prevent infiltration. In May 2017, Nowshera witnessed a forest fire that raged for several days after heavy shelling across the LoC.