In The Lake District 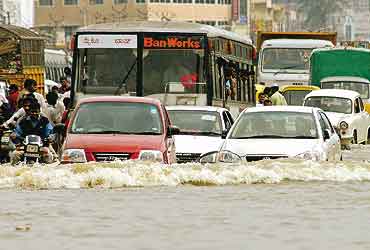 outlookindia.com
-0001-11-30T00:00:00+0553
Bangalore is marooned, but it’s not the quantum of rain that caused the problem. It was about 86.5 mm on the worst day, but the city’s infrastructure could not cope. One big reason for the flooding is the city’s many lakes. All of them were overflowing—Ulsoor, Begur, Puttenahalli, Sankey, Bellandur and Hebbal among others. The catchment areas have been encroached with the massive urbanisation over the years so the water had no outlet—it had to enter the homes. Eight lives were reportedly lost and schools shut down as a precautionary measure. The city police sent out an SMS asking people to use vehicles only in an emergency. Meanwhile, in Tamil Nadu there is growing apprehension that the discharge from the Mettur dam could cause the Cauvery to cross the danger mark.