In The Chocolate Factory

Hundred of crores stashed in Swiss tax havens. How much of it is true and what can we do to get our money back. 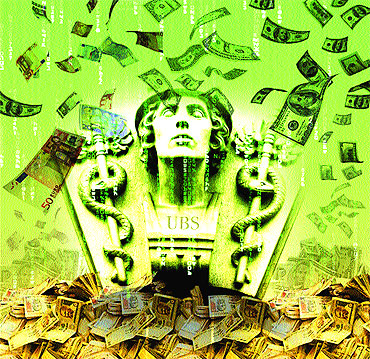 Five Reasons Why It’s Not Going To Be Easy

"One option is to allow repatriation of funds in instalments. Another is taxation, in stages or on a lower rate." —S. Gurumurthy, Swadeshi Jagaran Manch

"Every VDS disclosure has been completely abused... unfortunately the government has failed to declare them." —K.V.M. Pai, Ex I-T commissioner

"It’s not just the Swiss banks, what about the Mauritius route? Here, nothing happens...they are just scoring points." —D. Raja, CPI leader

"Most investigations come to a dead end... one money-laundering case can go through many jurisdictions." —Jyoti Trehan, ADGP, Punjab Police

"The issue of Swiss banking is so poorly understood, we are utterly mixed up on tax havens, treaties etc." —Mukesh Butani, BMR & Advisors

"There are no authentic figures available. I am doubtful about the premise of $1.4 trillion in Swiss banks." —Arun Kumar, Tax Justice Network

It’s the mother of all skeletons in the cupboard, or is it just a clever marriage of popular myth and political expediency? Brought up in a huge parallel or black economy, many Indians unsurprisingly believe that illegal tax havens are repositories of huge amounts of ill-gotten gain by politicians and businessmen. Why, elections have been won—in 1989 for one—on the issue of corruption and the link with Swiss banks. Who can forget India’s half-hearted attempts to track and get back the payoff money in the Bofors case?

Now, all of a sudden the whole get-back-the-billions-of-dollars debate is gathering political momentum again. Major political parties in the Opposition—from the BJP to CPI(M) to JD(U)—have promised to leave no stone unturned to get back the illicit Indian funds from overseas and use it for the country’s "development". The trigger, of course, has been the recent US success in getting Swiss banking major UBS to bend their secrecy rules, disclose names of around 300 customers and pay a penalty of $780 million for aiding tax evasion.

In an election bereft of major issues, the reactions have predictably ranged from approval to scepticism. But in this surcharged atmosphere, it’s also a political hot potato. Opposition leader and the BJP’s man for the top post, L.K. Advani, has been stressing on the issue in his speeches. Another BJP star campaigner, Narendra Modi, has even started opinion polls across Gujarat. In all this, the UPA hasn’t been silent either: Prime Minister Manmohan Singh has questioned the basis of the BJP’s numbers, while party technocrat Jairam Ramesh has written a letter to Advani accusing him of "lying" to the nation. 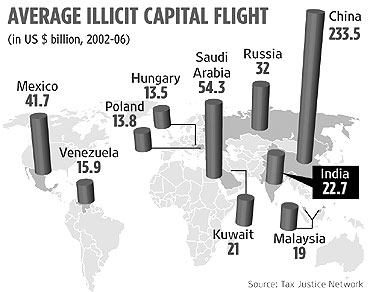 Meanwhile, there have also been accusations of government inaction on accepting the German authorities’ offer to share names of 1,400 people, including many Indians, holding hidden accounts in LGT Bank in Liechtenstein, a tax haven in western Europe. While UPA leader and home minister P. Chidambaram denied the charge, no government official looking into these matters agreed to speak to Outlook, citing the election code of conduct.

The war of words was natural in this politicised environment. Much of the debate has focused on the amount of illicit Indian funds overseas. Hardly surprising as the numbers vary from a mind-numbing Rs 25 lakh crore to Rs 75 lakh crore. Whatever the amount, there are also other fundamental issues: firstly, will the government be able to identify the account holders in Swiss banks and other tax havens? Will it be able to establish how much of the funds are legal and illegal? Can these funds then be brought back, and will the government have rights over it? Given that all this will take time, are these just election promises that are more rooted in realpolitik than reality?

Some international perspective is necessary here. "The era of banking secrecy is over," the G-20 leaders announced grandly in a communique earlier this month. The leaders even agreed "to take action against non-cooperative jurisdictions, including tax havens". Just how that translates into, say, an Indian government exposing accounts and recovering the money is less clear. As Nishith Desai of tax firm Nishith Desai Associates underlines, "One country cannot request another country to reveal confidential communications between a client and an attorney. This exchange of information is still a work in progress."

The only global muscle against tax havens is the Financial Action Task Force of the OECD (Organisation for Economic Cooperation and Development), a grouping of 30 wealthy nations. The FATF figures that tax havens hold some $11-12 trillion. It has published ‘black lists’ of jurisdictions that don’t comply with international standards for exchange of tax information. But this is a call for cooperation only in the course of investigation into a particular case of reasonable suspicion. There will be, as an FATF official says, "no fishing expeditions, no automatic exchange of information". The FATF has produced 40 recommendations and another nine special ones, but they are just that—recommendations.

While global leaders threaten to blacklist tax havens unwilling to share tax fraud and money-laundering information, our own leaders are pledging various steps, including bringing in yet another voluntary disclosure scheme (VDS). An amnesty is at the heart of the BJP’s strategy to get back the illicit money, according to S. Gurumurthy of the Swadeshi Jagaran Manch, part of the four-member panel appointed by Advani to suggest a gameplan. "The other option is to allow repatriation of funds in instalments. The third is taxation. This can be done in stages, or on a lower rate, or there can be an exemption below a certain level of declaration."

Given the dozen-odd VDS attempts we have had, with little follow-up action, former I-T chief commissioner K.V.M. Pai isn’t very hopeful. Credited with having fired the first salvo through a letter earlier this year to the PM, Pai estimates that black money accumulated by Indians—whether circulating within the country or parked overseas in tax havens—could easily "surpass income tax collections of the last 61 years".

Based on inputs from friends and intelligence sources, this ex-revenue services officer pegs the amount at about $1.4 trillion in Swiss banks alone. Together with funds in other tax havens, the number scales a mind-boggling $5 trillion. These very figures are doing the rounds on the Net and in political manifestos too. "Every disclosure (in VDS) has been completely abused. Unfortunately the government has failed to declare those abuses," avers Pai. 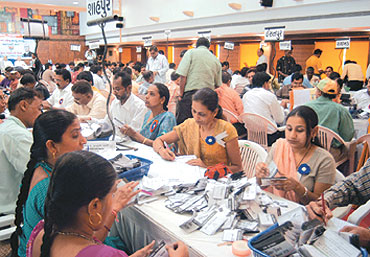 As many as 20.7 lakh votes were cast in a referendum held in Ahmedabad on whether black money held in Swiss banks should be brought back. 20.4 lakh voted in favour.

Barring the recent OECD estimates of funds in tax havens, experts concur that there is nothing to establish the amount hoarded by Indians in global tax havens. "There are no authentic figures available. I am doubtful about the premise of $1.4 trillion in Swiss banks. Though the OECD has put a figure of over $11 trillion in tax havens, how much of that is Indian funds is not known," says Arun Kumar, JNU economics professor and member of the Tax Justice Network, an organisation that tracks activities in 77 tax havens.

In short, there is no way of knowing how the black money of the country finds its way offshore, or how much. Some estimates put it as 10-20 per cent of India’s GDP as against 6 per cent of the $16 trillion GDP in the case of the US. Given the ambiguity, there’s been considerable scepticism about the veracity and sources of the estimates of illegal money parked overseas. However, some argue that the entire focus on the amount of illegal money overseas is facetious. Another member of the BJP’s task force, Professor R. Vaidyanathan of IIM Bangalore, emphasises: "If we don’t try to prise open the wheels of secrecy of Swiss banking, when the list is eventually released by some other country, we’ll be the laughing stock of the world."

Similarly, D. Raja of the CPI stresses the need to keep black money on the agenda for the new government. "It’s not just the Swiss banks—what about the Mauritius route? Nothing has happened except that one party will score points over the other," he says. This brings us back to the original question: for all this talk about breaking Swiss banking secrecy, will India be able to get this information—and be able to act on it? The answers are not so simple.

To begin with, India will have to establish that funds held by overseas banks are ill-gotten. Given liberalised rules permitting up to $2,00,000 repatriation a year by individuals, there is now a fair amount of room for Indians to park funds overseas. Though India is not looked at as a major source of terror, arms or drug money, individuals and companies use other innovative ways to park funds overseas to avoid paying taxes.

Globally, under-invoicing of imports and over-invoicing of exports are among the modus operandi employed by businesses to accumulate illegal funds. Another method employed by companies is to acquire a shell company in a tax haven at an absurdly low price, and then re-sell at the market price, to create tax-free profit. The provision on shell companies is now being toughened following the G-20 meeting, and that could be an inroad into accessing individuals who often use these companies to hold their money and disguise their transactions.

The challenge for any government in India, or anywhere else, would then be to establish the fraud before the jurisdiction in a tax haven. Given its own national interests, the host jurisdiction will have much reason to challenge it, and even tip off their client to disguise the money further. As Mukesh Butani of BMR & Advisors puts it, "In India, the issue of Swiss banking is so poorly understood that the UBS disclosure, G-20 communique, unregulated tax havens and tax-related treaties are utterly mixed up."

Experts stress that in the case of UBS, the US was able to put pressure on the bank because of its large presence in the country. Also, the tax fraud was established beyond doubt. Yet, even in the UBS case, there are over 16,500 accounts still shrouded in secrecy. Is it possible that India would fare better? Can it craft watertight legal cases to present tax havens with a fait accompli?

More often than not, the fault lies within. Going by his own tenure at Interpol, Punjab’s additional director general of police, Jyoti Trehan, says that "most investigations come to a dead end or get stalled. One money-laundering case may have gone through many transactions involving several legal jurisdictions. Going through each process may take several years". Having rarely seen the extradition of a fraud accused come through, Trehan is not too hopeful of India meeting much success in getting back illicit money parked overseas. He cites the failed attempt to trace former Tamil Nadu chief minister Jayalalitha’s reported secret accounts in London through an old boy network in Singapore.

Experts stress that for the legal process to have teeth, it has to be backed strongly by bilateral diplomatic relations and international treaties. As India has found to its cost, bilateral treaties like that with Mauritius can in fact become a legal route to rerouting black money into the country. Moreover, the all-important question remains: do our political leaders have the will to pursue the black money issue to its logical end? As late prime ministers Narasimha Rao and V.P. Singh would have pointed out, there can be a heavy price to pay. Not everyone is willing to put his or her head on the block. The answer will be evident after Elections ’09.

By Lola Nayar and Pragya Singh in Delhi, Arti Sharma in Mumbai and Sanjay Suri in London