In The Beginning, There Was History 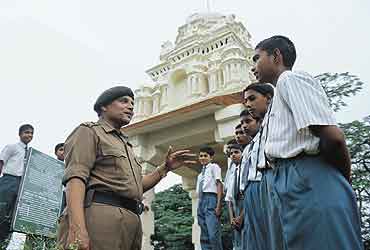 outlookindia.com
-0001-11-30T00:00:00+05:53
As places go, Bangalore seems an odd precinct to look for relics of Maratha rulers, Shahaji, his legendary son Shivaji and their bete noire, the Mughal ruler Aurangzeb. But, thankfully, the city’s rich past and its little-known eminence in history are being documented and communicated to students by a nondescript ‘expert’. He’s not quite the copybook archaeologist romancing the stone. Suresh Moona’s zeal alone has prompted him to chronicle and disseminate historical facts. He is otherwise a biology teacher and ncc’s chief officer at Acharya Patha Shala (APS) Boys High School, Bangalore.

Moona’s AARAMBH (An Association for Reviving Awareness about the Monuments of Bangalore Heritage) has organised heritage walks, lectures and exhibitions for scores of school and college students, ias officers, writer Ruskin Bond, and members of the Rotary and Lion’s Clubs. That’s not all. Absorbing details of more than 50 historical sites—palaces, museums, armouries, war memorials, places of worship, tombs, cemeteries, avenues and water bodies used by various royal families—have been documented. In addition, he has recommended the introduction of conservation of monuments as an integral part of ncc activities. "I want to stir up a sense of pride and an emotional bond among these students," says the 52-year-old Moona.

Ironically, a city that ought to have been flaunted as a veritable open museum, complete with masterpieces of the eras of Kempe Gowda, the Marathas, Mughals, Hyder Ali, Tipu Sultan, the British and Dewans, has only a handful left in half-decent condition. In recent years, Moona’s campaign has paid off—three monuments, including the armoury of Tipu Sultan, are being restored.

The lectures and exhibitions he organises have also spurred local educational institutions to organise painting and essay-writing competitions on the city’s history. Besides, members of the nss wing at bms College for women, Bangalore, have launched a project to clear Bugle Rock, a heritage site, of graffiti and improve the upkeep of its environs. "At the end of our year-long effort, we plan to instal an information board with interesting facts about the place," says Dr Shobha Devi, the nss Officer at bms College for women.

As for the students, the walks and lectures have drawn them closer to some monuments literally in their backyard. "A group of my friends is planning to preserve a monument in our neighbourhood. We did not know about it till sir told us," says M. Karthik, a class IX student at the APS Boys High School. His classmate Sohan Rao seems keen to emulate Moona and publish books on these historical sites. "I am putting down interesting facts about these sites and have a collection of the pictures also. I will keep alive people’s interest in these monuments by publishing these books," says Sohan.

In order to strengthen this unique drive, Moona has built a second line of activists, partly from his family—daughter Navya, 22, and son Gurudarshan, 17—and some of his students. They have been trained to talk on heritage sites and the city’s links with history. "The effort is to constantly hand on the correct historical perspective (on each edifice) to young people and encourage them to maintain each of the links with history. More growth means more progress, but the growth of the city should not be at the cost of our heritage. We must save the soul of the city," says Moona. He now plans to launch 25 heritage walk packages, complete with roadmaps and historical details (each walk would last about two-and-half hours), for people with a yen to discover the fascinating past of Bangalore.

"No Way Am I Entering Politics"