In Someone Else's Arms 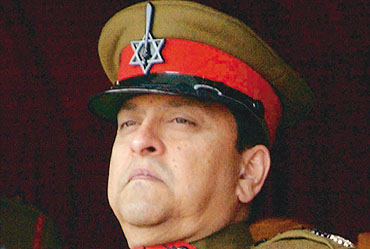 outlookindia.com
-0001-11-30T00:00:00+0553
It was one of those ads you normally won't notice. But what appeared in the May 14 edition of Gorkhapatra, a government publication in Kathmandu, was in many ways an advertisement of the poor Indo-Nepal relations. Akin to a tender, the Gorkhapatra insertion asked those companies producing tanks, gunships, helicopters, aircraft/accessories, armoured personnel carriers and spare parts to furnish details to the Royal Nepal Army.

What's unusual? The advertisement was odd because New Delhi has acted as a single window clearance for Nepal's defence requirements, and frowns heavily on any Nepalese attempt to acquire arms from sources other than India. It was also a reminder of the souring of the Indo-Nepal ties in March 1989, when India began an year-long blockade of landlocked Nepal after, among other things, New Delhi determined that Kathmandu had acquired arms of both defensive and offensive capabilities from the Chinese.

Kathmandu's latest attempt to test the waters hasn't, in contrast to 1989, raised eyebrows. Indian government sources say that "the advertisement is not asking for supplies, only information. Even last year they asked for similar information".

But of what use is such information for Kathmandu, more so as it can't effectively deploy tanks in the mountainous terrain? In fact, the only area where Nepal can deploy tanks is the Terai region which accounts for only 17 per cent of the country's land. Can Nepal then diversify its arms acquisitions; and why?

In the recent past, Nepal has reportedly procured arms, including body armour and night vision equipment, from Belgium and the US. The Belgian arms deal of 5,500 Minimi machine guns made by the Walloon-based company FN Herstal prompted Belgian minister Magda Aelvoet to quit in August last year (since she could not square the decision to give Nepal arms with her conscience), four months before the first consignment arrived in Nepal in December. This because the Belgian law forbids arms exports to countries engaged in civil war. The Americans gave Kathmandu 5,000 assault rifles (of the M-16 kind) to help fight the Maoist insurgency.

India has had to sit by and watch these developments. Shortly before the Belgian and the US consignments landed in Kathmandu, Indian foreign secretary Kanwal Sibal advised western countries on December 17, 2002, in Paris to be "careful about extending excessive military assistance to Nepal in order to avoid increase in the lethality of the internal conflict and the leakage of arms to the Maoists".

Government sources say India, which has been the prime source for training and supply of arms to Nepal, has requested the US and others that "no arms should be given to Nepal which are more sophisticated than those in the Indian armoury. We don't want the level of conflict in Nepal to be upgraded". The Indian government estimates that the Maoists predominantly acquire their arms by looting government armoury; only 15 per cent of this loot has been recovered. With India sharing over 1,700 km of open border with Nepal, the chances of these weapons being used in India becomes higher, especially considering the links between Nepal's Maoists and Left radical groups here.

Sources recall that exactly four days after the Maoists broke the ceasefire on November 21, 2001, the chief of the Royal Nepal Army, Gen Pyar Jung Thapa, cut short a trip to Germany and called on India's then army chief, Gen S. Padmanabhan. Gen Thapa "produced a list of equipment for counter-insurgency operations. It was supplied within 15 days, a record". After that too, sources say, "list after list has come in and we went on supplying. In fact, when we didn't have stock, we purchased it in foreign currency and gave it to Nepal."

It's thus surprising why Nepal should be unhappy over India's attitude to their defence supplies.Sources say Kathmandu is perhaps acting in pique because New Delhi wants to gradually move to a stage where Nepal bears the cost of procuring weapons more equitably. Currently, Kathmandu defrays only a fraction of the total cost. And though this proposal is in the "thinking-aloud" stage, the Gorkhapatra ad is perhaps an insurance for the future.

The US and Belgium apart, the UK too is developing higher stakes there than it has in the past. In February this year, it appointed Sir Jeffrey James, a retired career diplomat, as special representative to liaise, formulate and implement the UK's Nepal policy. Before his appointment, London had put together a military aid package to Nepal that included two M1-17 helicopters and equipment to be used in the military intelligence support group which the UK is assisting the Royal Nepal Army in setting up. The European Union is also in the process of appointing a special representative to Nepal "to offer mediation between conflicting parties".

Obviously, Nepal considers itself under-equipped, despite the assistance from the Indian government, to decisively take on the Maoists, who now run nearly half the country. This is proof of New Delhi's failure in arresting their march. With Kathmandu now successfully leveraging its Maoist insurgency to rapidly build new links with the world, New Delhi has become even more of a spectator.

"We have failed in Nepal," admits a senior source. Adds another, "We specialise in emasculating ourselves by not developing strong stakes there. By now we should have had Nepal in our pocket." This has become even more difficult now because King Gyanendra does not warm up to India the way his predecessors did.