In Search Of The Good Life 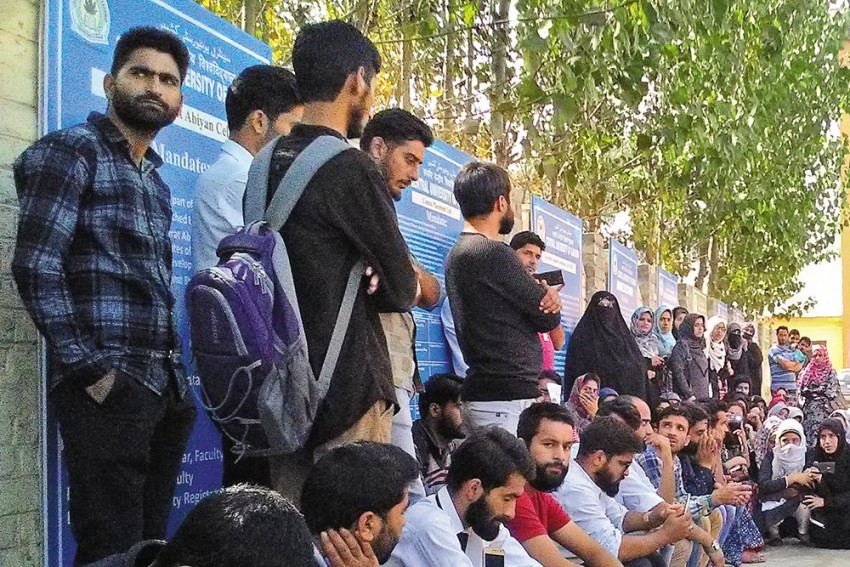 Wanting Out
Amidst the unrest, many Kashmiri students seek a change in scene
Naseer Ganai May 24, 2018 00:00 IST In Search Of The Good Life 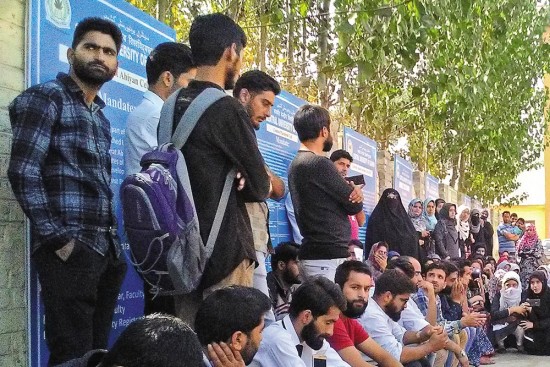 Any time of the day, thousands of boys and girls—all students, as the bags on their backs ind­icate—are seen in Srinagar’s uptown Baghat Parraypora area, known across the Valley as a hub of coaching centres. By the latest count, around 12,000 students are enrolled in these centres, where they are coached for various competitive exams. Most are from various districts of the Valley and prefer to stay in Jammu & Kashmir’s summer capital as the city is considered comparatively safer and witnesses less frequent shutdowns than the hinterland. In the southern districts, especially Shopian and Pulwama, there have been numerous shutdowns called by separatists against killings of civilians and militants. As a result, schools and colleges were able to hold classes for less than 15 days since they reopened in March after a two-month winter break.

According to Latief Masoodi of the Coaching Centres Union of the Valley, around 7,000 more are enrolled in coaching centres elsewhere in the city, while 6,000 to 8,000 students from the Valley join centres in Jammu and Delhi—for Srinagar, though relatively calmer, is no stranger to killings and shutdowns. Perhaps to reiterate the omn­ipresence of violence in Kashmir, be it city or countryside, just a few metres from a popular coaching centre, there is concertina wire on the footpath and a posse of armed personnel on the road, signalling the presence of a camp of the paramilitary Central Reserve Police Force in the vicinity.

Besides the coaching centres, Parraypora is also dotted with what are called “private educational consultancies”, which operate outside government control and regulation. One such is run by 25-year-old Arif Ahmad, who returned to the Valley in 2015 after completing his MTech from Haryana’s Kurukshetra University. Claiming that educational consultancy is not just a luc­rative business, but also a commun­ity service, Arif is careful not to give away any details about the scores of Kashmiri students he claims to have helped get admission in various courses across the country and abroad. “No consultancy will share such information,” he says. “Most Kashmiris prefer to pursue engineering in south India, Punjab or Noida in the national capital region. We don’t favour north Indian states like Hary­ana, Rajasthan and the interiors of UP as Kashmiri students have faced harassment there in the past few years.”

A few metres away from Arif’s two-room office is where 45-years-old Bashir Ahmad Bhat, treasurer of the All Kashmir Education Consultancy Union, set up his consultancy in 2010 along with a partner, Ishfaq Ahmad. “I have assisted over 500 students in getting admission to colleges in various states, besides Bangladesh and Central Asia,” says Bashir, who was in the pharmacy business before changing track. According to him, students from upper middle-class households prefer Bangalore and Pune for engineering, management and computer courses, and Bangladesh for MBBS. “It is not far, not expensive, quite safe and culturally similar, being a Muslim country,” says Bashir.

Shabir Hassan, a postdoctoral ­scientist at the Harvard Medical School, who gives free counselling to Kashmiri students on educational matters, says Bangladesh is a good choice as English is the medium of instruction in Dhaka’s medical colleges, Urdu and Hindi are commonly understood, the food is not very different, and the air tickets are affordable.

“It is good that thousands of Kashmiri students get admission in technical courses in various places of the country, but we don’t keep any record,” says Farooq Ahmad Shah, secretary in the department of education. State government spokesman Naeem Akhtar says, “Thousands secure admission on their own in the best institutions in the country and many also go abroad.”

G.N. Var, who heads another body of coaching centres, the Coaching Centres Association, says around 5,000 students every year move out of the Valley on their own or with the assistance of cons­ultants. “Kashmiris spend over Rs 1,400 crore annually for the education of their children elsewhere in the country and also abroad, especially Bangladesh.” The Prime Minister’s Special Scho­larship (PMSS) scheme also helps around 5,000 students from J&K get admission in various colleges across the country. In 2011, then PM Manmohan Singh had announced a Rs 1,200-crore package for students from J&K to join medical, engineering and other courses outside the state. The Narendra Modi government extended the scheme and increased the number of scholarships from 1,000 to 5,000 every year. Students coming from families that earn less than Rs 6 lakh per annum are eligible for the scho­larships under the scheme, and currently 2,070 students are being sponsored for degree courses, 2,830 for professional technical courses and 100 for MBBS or BDS.

During the early years of the armed insurgency in the 1990s, many Kashmiris were sending their children to the Central Asian countries for studying medicine. Many of them now practise in the health department and various medical colleges in the state. Commonly known as “Russian doctors”, they had to face problems as their colleges were not recognised by the Medical Council of India (MCI). “In the case of Bangladesh, however, the MBBS courses are recognised by the MCI,” says Bashir. 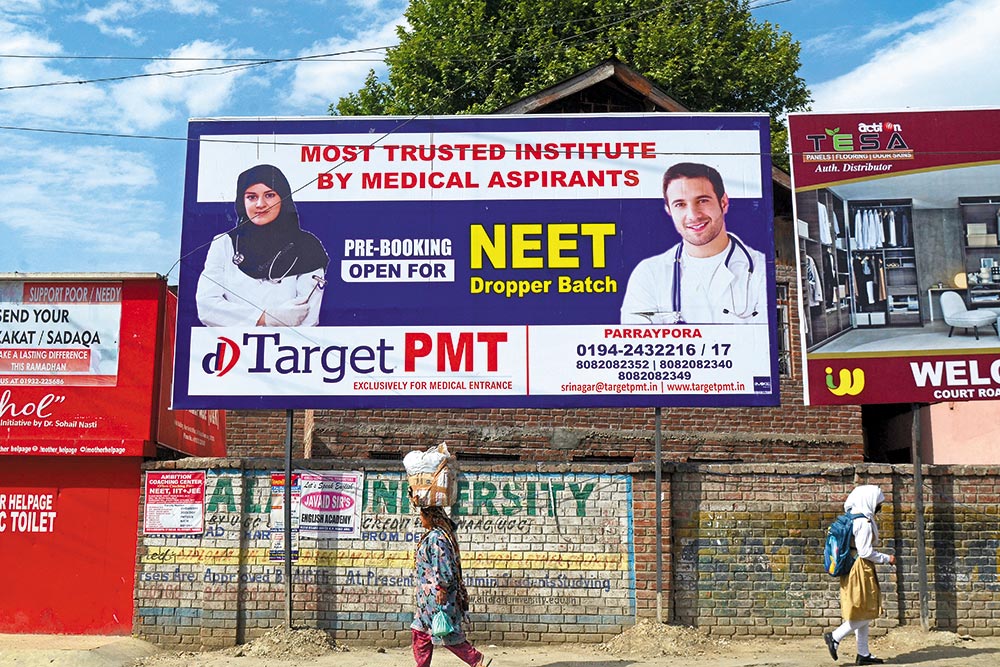 The Prime Minister’s Special Scholarship scheme for J&K ­students sponsors 2,070 students for degree courses, 2,830 for technical courses and 100 for MBBS or BDS.

A senior official in Srinagar’s government medical college says 100-130 MBBS degree-holders from Bangladesh work as interns or surgeons, and are doing post-graduation in the college. The students get good marks in Bangladesh, which helps them qualify for various exams in the state.

“A good number also study medicine in Pakistan, but no consultancy likes to get involved in such admissions as it involves a lot of security risks,” says Bashir. Pakistan offers scholarships to Kashmiri students for medical cour­ses, and early this year the National Investigating Agency claimed visa applications of such students were recommended to the Pakistan High Commission by various Hurriyat leaders.

Thousands of Kashmiri students have also enrolled in many private institutes in neighbouring state Punjab, like Aryan’s Group of Colleges and Swami Vivekanand Institute of Engineering and Technology (SVIET) in Rajpura and Desh Bhagat University in Gobindgarh, besides the universities there.

Students continue to go out of the Valley for education despite the growing number of the cases of harassment. In 2016, the Union home ministry established a 24×7 grievance redressal helpline for Kashmiris, especially students. The ministry also posted a nodal officer to receive complaints from Kashmiri students and coordinate with the states in pursuing them. The helpline was established after the ruling and opposition parties raised the issue of harassment of Kashmiris in various parts of the country with the home minister Rajnath Singh during his visit to Srinagar in 2016.

During the 2016 unrest in the Valley, there were reports of harassment of Kashmiri youths in states such as Madhya Pradesh, Rajasthan and Uttar Pradesh. This February, two Kashmiri students were assaulted in Haryana on their way to a university there. Following outrage over the incident by J&K CM Mehbooba Mufti, three persons were arrested in the case. In May 2014, a group of Kashmiri students were allegedly forced to chant anti-Pakistan slogans at the Noida International University (NIU). After a strong reaction from then CM Omar Abdullah, the NIU moved over 100 Kashmiri students staying in the hostel to a safe house.

In March that year, 54 students from J&K, who had got admission in Meerut’s Swami Vivekananda Subharti University under the PMSS scheme, were expelled for allegedly cheering the Pakistan cricket team. The Pakistan government offered scholarships to all the expelled students. Things seem to be changing for the better now, with Akhtar saying, “The government has put a mechanism in place that is sensitive to any incident of harassment of Kashmiri students. We lose no time in taking up the issue with the CM of the state where the unfortunate incident takes place.”

Elitist Islands Must Not Return