In Search Of A Plot

There are few sensations worse than reading a book with anticipation and realising that the package should have been marked Dead on Arrival. 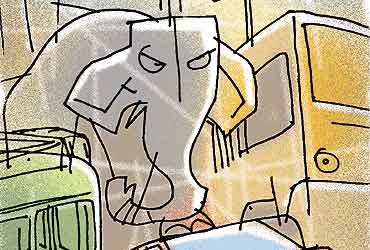 The Elephant And The Maruti
By Radhika Jha
Penguin Rs 250; Pages: 243
There are few sensations worse than reading a book with anticipation and realising that the package should have been marked Dead on Arrival. With her debut novel, Smell, Radhika Jha pulled off the tricky feat of writing about a sensitive woman’s travails with little handwringing and considerable flair. Her second book, a collection of six short stories, flails around in desperate search of a subject.

The Wedding is an unsuccessful attempt at social comedy in Delhi, despite a riff on the darker side of attraction. It totters under the weight of its own ambition, and also sees Jha recycling the prose in praise of the olfactory nerves that first brought her attention. Story after story attempts to scale the heights and breaks down into incoherence at best, portentousness at worst.

Beauty could have been a great minor work, as it brings two schoolgirls, one assured, one under-confident, into contact with a photographer who bitterly resents the beauty he feeds off. But even here, Jha’s subtle handling of one character is at odds with her heavy-handed portrayal of the other two.

The Elephant and the Maruti, one of the many tales in which the author attempts to do for Delhi what Mistry and Co have done for Bombay, has possibilities. An elephant steps on a Maruti in heavy traffic; a woman made late for work refuses to pay a parking attendant, and inadvertently propels him into disaster. Jha’s touch is surer here than elsewhere. Many years ago, I said I’d eat my hat if Radhika Jha didn’t do better with her strange, beguiling talent than another writer of the same surname. There is, before me, a plate, a fork, a knife, and a Homburg. Wish me bon appetit.