Terror's talons have bloodied the golden geese of Indian tourism 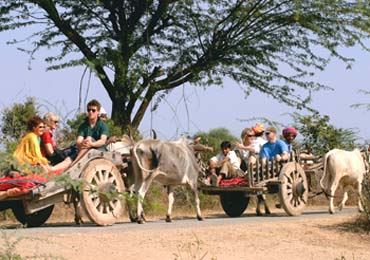 The economic meltdown and the Mumbai terror attacks on top of that have come as unkind cuts for tourism in India. Whether it be Kerala, Rajasthan, Goa or any other destination—the peak December-March tourist season is all but lost, even new inquiries have shrivelled up. These destinations, cowering under a 15-30 per cent drop in business due to the global financial crisis, now have to contend with negative travel advisories from many western countries such as the UK and the US after live coverage of last week's Mumbai terror attack were played out on TV. For the tourism industry, mounting cancellations and no bookings presage a bleak Christmas-New Year season.

The bad news is it has just begun. Next year, all bets are off on Incredible India. "The Indian tourism sector earns Rs 10-12,000 crore through inbound tourism. If 20-30 per cent of that goes, it is substantial. If the season doesn't pick up by February, the figure could go up to half a billion dollars, as it would not only be a loss on account of cancellations but also the money spent by foreigners in India," says Keyur Joshi, co-founder and COO of the travel portal Makemytrip.com.

There is a serious slowdown in inbound travel, with cancellations from Europe, America, and to some extent from Southeast Asia and Australia. "In my company we have seen 25-30 per cent cancellations; that is a conservative estimate and will get higher," says Joshi. The biggest hit will come from business travellers, many of whom have cancelled their trips. There are many hotels in Delhi, Mumbai and Bangalore where 50 per cent of the business is from business travellers. They would take a serious hit.

Hotels usually made a killing during the last week of the year. In Goa, the party destination on which the happening descend every New Year, for instance, star hotels that normally charge Rs 12,000 to Rs 13,000 up their prices to Rs 25,000 a night between December 22-January 5. And although a one-way flight ticket from Mumbai to Goa can go from Rs 5,000 to Rs 15,000, domestic tourists (22 lakh came last year) were willing to suffer this collateral damage. Not anymore. Says Nilesh Shah, chairman, Travel Tourism Association of India (Goa chapter), "A tourist's first concern is security. After the Mumbai attacks, they won't come even for free." 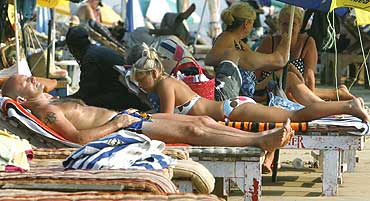 Paradise ignored: Tourists in Goa are the source of much foreign exchange

In Goa, while most charters (710 came last season, bringing 1.75 lakh of the 3.8 lakh foreigners who visited Goa) are booked 3-6 months in advance and are not refundable, some planes are still coming with under 80 per cent occupancy. Russian tourists—a growing segment—are also backing out. "First-timers are scared and with their being no direct charter from Israel, the sizeable number of tourists from there are having a rethink about Goa," says Shah. " But we are making special offers and hoping against hope," says Ernest Dias, vice-president, Kuoni Destination Management (formerly SITA).

Kerala Tourism officials had projected the meltdown alone would lead to about 30 per cent cancellations in hotel bookings. The industry was bracing up to meet the drop in international tourists by aggressively targeting domestic travellers. "But travel advisories (it means no travel insurance while in India) make our shore-up efforts more difficult," says V. Venu, Kerala's tourism secretary. Tourists scheduled to travel to Kerala after December 15 currently seem to be following a 'wait-and-watch' strategy.

Rajasthan's popularity among foreign tourists could be gauged from a quantum leap in number of tourists: from 4,28,000 in 2002 to 1.22 million in 2006. The annual rate of growth of tourism had increased by seven per cent for domestic tourists and five per cent for foreign visitors. All that changed after the Jaipur bomb blasts in May. S.P. Jain, president, Western Region Hotel and Restaurant Association, says in the short and medium term, business will go down by about 20 per cent. He says that 30 per cent advance bookings by foreigners have been cancelled.

"Although Mumbai lies some 1,000 km north of Kerala, the psychological impact can't be just wished away", says E.M. Najeeb, president, Confederation of Tourism Industry of Kerala. Hotels and resorts, including in popular destinations such as Kovalam and Fort Kochi, have suffered cancellations. The resultant pall of gloom is most evident in Alappuzha backwaters where a flotilla of houseboats remain berthed. Tomy Pulikattil, who owns a fleet of houseboats, says his office is buffeted by cancellations on e-mail.

The picture in Goa is equally grim. Travel Tourism Association of Goa chief Ralf de Souza says: "We already faced a 15 per cent drop in an industry growing every year, peaking in 2006 to 13 per cent." Even restaurants hardly have walk-ins. Jan Bostock, manager of the Tribes restaurant in Baga, says, "Last year this time our daily turnover was Rs 20-25,000. Now we hardly get Rs 1,000 a day."

The only hope this season rests in domestic tourism. But that alone cannot compensate for the dollars and euros lost. As Homa Mistry, director and CEO, Trail Blazer Tours India Pvt Ltd, puts it: "The game is now only within the country. Fortunately for us, we have a parallel economy within the country, which is huge. This will lead to domestic tours and travel getting structured and can have a positive impact. Everybody is looking at this market to salvage things."

with Arindam Mukherjee and Omair Ahmed in Delhi, John Mary in Thiruvananthapuram and Lionel Messias in Panaji

'Every Lock Has A Key'