In Lieu of Courting Justice 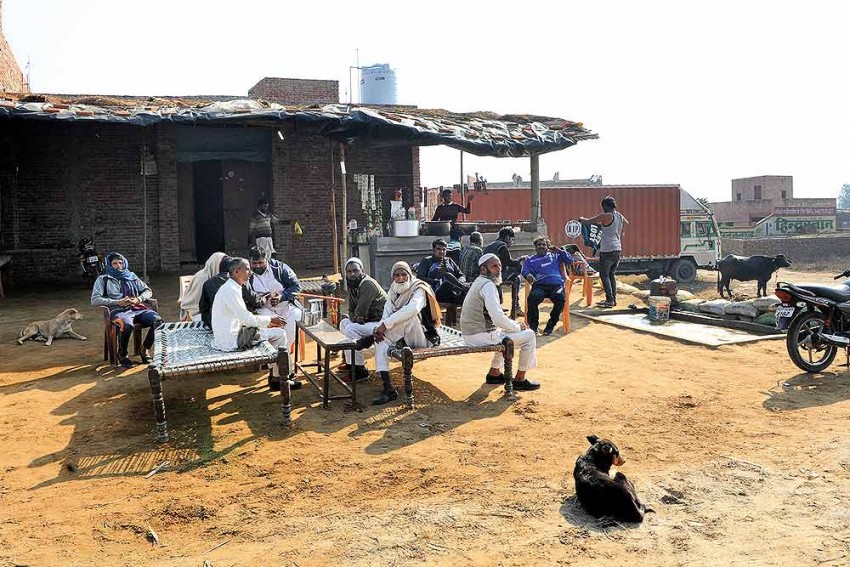 Site of convergence
A socially diverse crowd at an eatery on the Shamli-Kairana highway
Photograph by Jitender Gupta
Pragya Singh January 25, 2018 00:00 IST In Lieu of Courting Justice 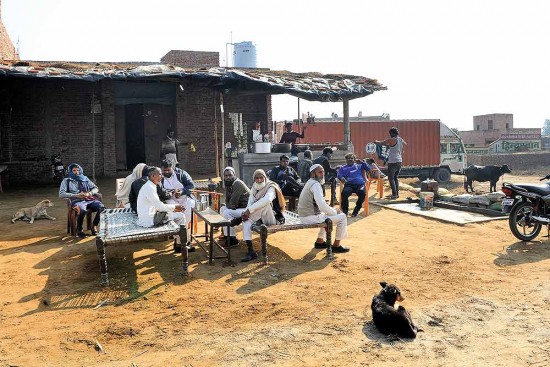 There can be justice in letting go. It is apt, if ambitious, to remember this tenet of South Africa’s truth and reconciliation commission even as two groups try, in a small corner of India, to put their own differences aside. The scale of trauma doesn’t match, nor does the setting—in South Africa, the truth-­and-reconciliation exercise acc­om­panied the fall of the erstwhile apartheid regime—but there is a few commonalities: one, a society divided into a dominant group and those whom it dominates, allowing an almost neat classification as perpetrator and victim; two, a history of prejudice; and three, large-scale violence and consequent displacement of people. In 2013, 60 people, 40 of them Muslim, were killed and over 40,000 Muslims disp­laced in Muzaffarnagar and Sha­mli districts in western Uttar Pradesh. Now, there are attempts to promote conciliatory talks between Muslims and the dominant Jat community to bury the grief and rage, so people can live peacefully in the troubled region.

Untested so far, the idea of such talks—supposedly aimed at striking a “peace deal” of sorts—has also invited controversy. The effort hinges on survivors on both sides retracting riot-related police cases—somewhat like German automaker BMW settled a class-action lawsuit last year with a $477-million payout. There is no stock format and no official involvement in the Muzaffarnagar exercise, though. Sudhir Panwar, former member, UP Planning Board, and president, Kisan Jagriti Manch, sounds genuinely sanguine: “There is room for reconciliation between Jats and Muslims as nobody stays in the same place emotionally or mentally for long.”

Panwar, who contested the UP poll on a Samajwadi Party ticket from Thana Bhawan, had met party chief Mulayam Yadav in 2014, proposing peace efforts. “Nothing came of it then, but the process started and is continuing,” he says.

But are avowals of mutual friendship enough to heal the trauma? The police and courts are the most natural place for riot victims to seek justice. Would some who look for justice in courts be pressurised by their own community to reconcile? What would reconciliation look like to those who have sought refuge in their own community, far from mixed-­community villages? Would divisions deepen if the underlying gulf remains unaddressed? Are there ways to heal that do not make victims again of those previously victimised? It’s an entente rife with question marks—both in terms of efficacy and legal morality. 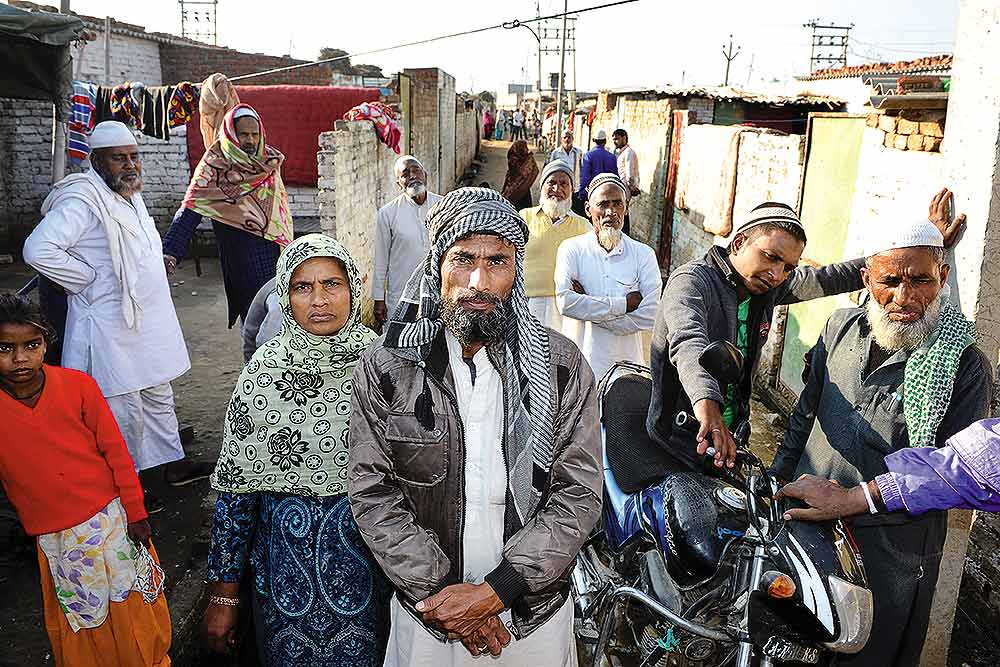 Islam at the Malakpur camp

A joint Jat-Muslim committee is moving around in prominent riot-hit villages, talking up the need to overcome the violent separation. “Our fight has caused only social and economic anxieties,” says Vipin Balyan of the Jat Sanrakshan Samiti, which claims to represent Jats of both religions as also riot-hit Muslims. “Jats and Muslims never fought before, even during Partition. Why should they now? We are telling people to let go of anger now and they are listening.”

Balyan and his men are especially active in villages where Muslims were hit hard—places with many cases against Jats—and their  reconciliation plan is based on witnesses turning hostile and upending as many as possible of the 470-odd cases in court, involving 1,400 accused. “We will provide legal assistance to those who want to withdraw the false cases they filed,” he says. “Those rendered homeless, or forced to live in tiny homes, will get pucca houses where they want.”

Among those active in the negotiations is Ombir Tomar, SP leader from Baraut. “The Muslims want guarantees of peace and the Jats are saying they regret what happened,” says Tomar. “Some 99 per cent of Muslims and Hindus have agreed to compromise.” The idea is to leave only the heinous crimes to the courts. “Muslims  too want the ­bitterness to subside,” says Nawazish Alam Khan, former SP MLA from Budhana, who recently joined the Rashtriya Lok Dal. “We have to move tow­ards reconciliation at some point. False cases have been filed against Muslims too.” The unpalatable bit, at least two persons involved in the negotiations admit, is that perpetrators might presume a similar free pass in future. 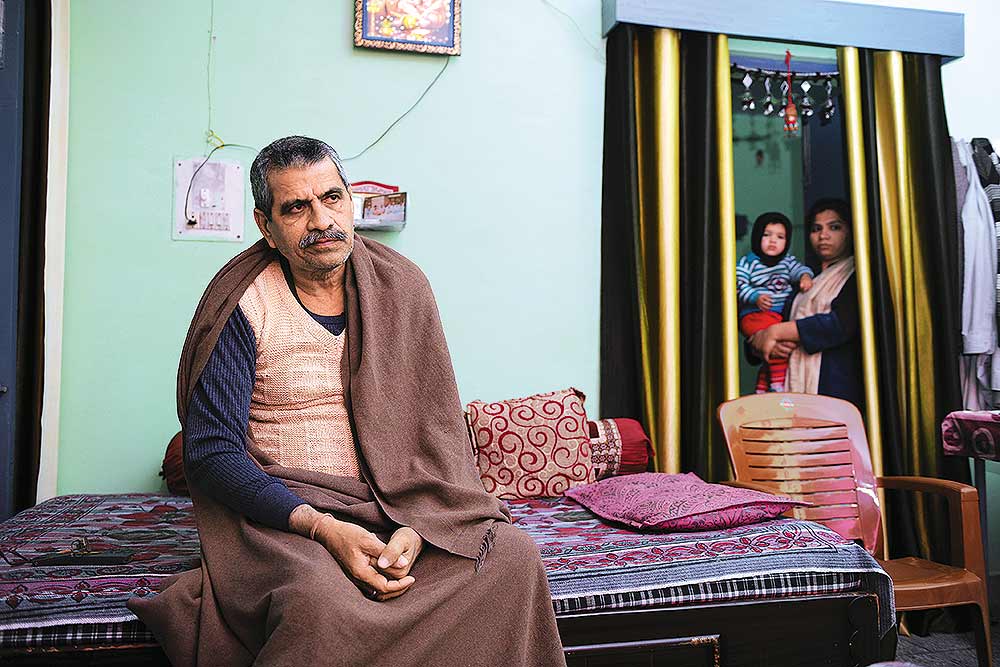 Is there a grain of remorse among the accused, or will this become an unwelcome templ­ate? The aggressors in 2013, after all, were largely dominant Hindu Jats, the victims almost all Muslim.

“Waiting for justice has broken the victims, so trying to reconcile people in the villages does make sense. But how can those who committed crimes be let off?” asks Rehana Adib, a social activist supporting victims of Kutba-Kutbi, the worst-hit twin villages, where eight Muslims died and over 800 were rescued from violent mobs by the armed forces.

Tahir, a 20-year-old survivor from Kutba, had filed the lone FIR for his village naming over 100 Hindu perpetrators. “Either the court should start taking witness testimonies soon or the people will start accepting settlements,” he says. “Muslims have also been named in some cases, for instance in Kawal. If they are let off, then we will go with the community too.” The committee visited his camp in Basi on Sunday, provided street lights and helped dig proper drains.

The array of responses to the reconciliation effort offers, perhaps, a test case for how the kernel of amity can be sown in a discordant field. For the Jats, an accord implies freedom from cases their members are tied up in. For Muslims, they offer a small but distinct opportunity to recover the old economic ties. Eking out a livelihood has become a challenge, not just for those cordoned off into camps since the riots. Shyam Singh of Bahavadi longs for “the old bhaichara”, for instance. “In 2013, people got carried away, but now they are sorry,” he says. “We struggle to get work done on the farms as the Mus­lims who left were skilled farm workers” 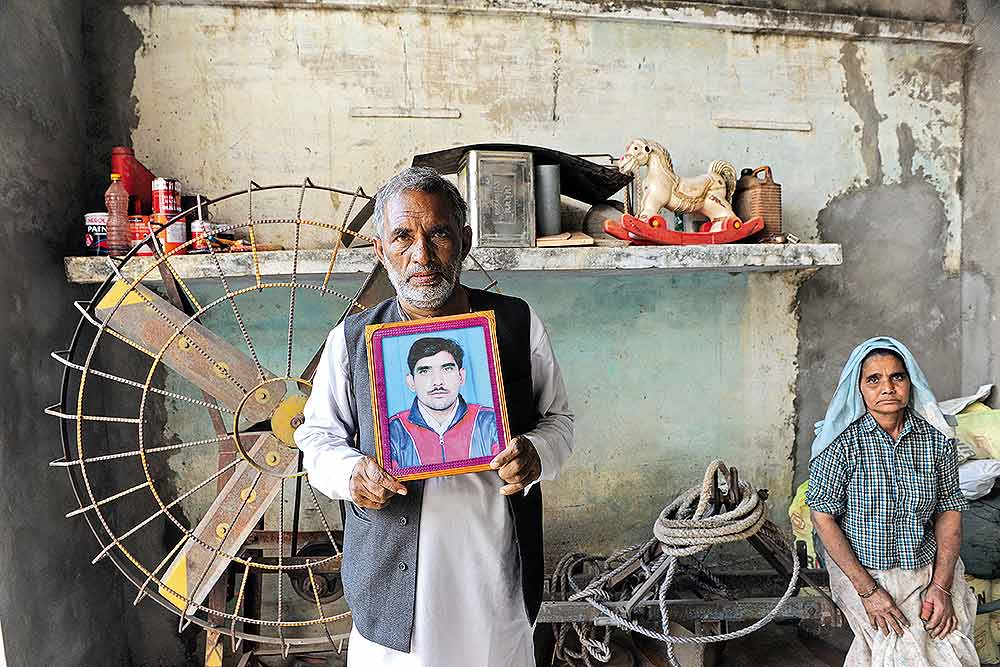 Jawahar holds a photo of the son he lost in 2013

Ghulam Mohammed Jola, a farm leader in Budhana, is involved in the discussions, again with a touch of bitterness about elusive justice. “Not many will compromise unless paid off,” he says. “Muslims want the compromise to start fromKawal village, as that’s where the riots started.”

Each player in this game has to justify the notion of ‘reconciliation’ to himself—a moral quandary for Muslims in particular, while their political and ­soc­ial marginalisation deepens in the state. Hence, they wait for communities to weigh in, making compromise seem like less of a trade-off for their lost family, homes and sources of income.

Feroze, 22, a driver from Bagra, now in a resettlement colony near Malakpur, saw his uncle being killed in 2013. “Five men were arrested. Four got bail, the police don’t care. In Bagra, they threaten me. Things are not like before. The Jats took our land and animals. I can’t return. I hope for justice from courts—though that doesn’t seem to be working,” says Feroze, whose father Islam, tired of terrible living conditions in the camp, is mulling over accepting a “samjhauta”. Though surrounded by Muslim-majority villages, the camp residents are unhappy. “People from the village hate us,” says Islam. “We urgently need old tin roofs to be replaced. We need toilets and drinking water—we have nothing.” 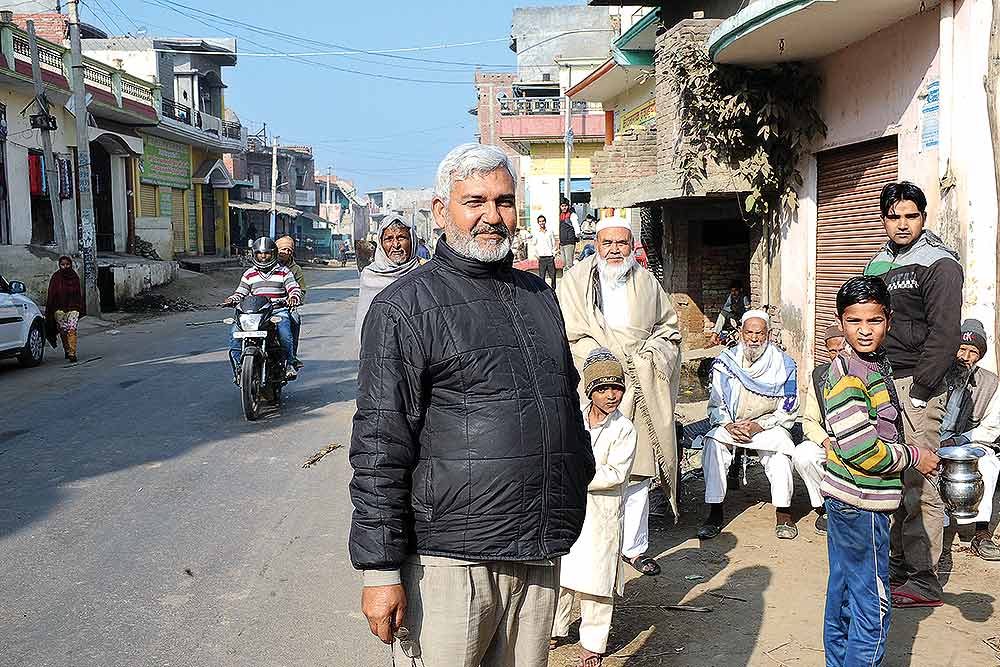 Chaudhary Shakir, an ­accused from Purbaliyan

Reconciliation of this kind cannot be about individual cases, but entire villages—Hindus want cases related to prominent villages dropped; Muslims want justice where they were targeted. That is why two villages, Kawal and Purbaliyan, are the fulcrum of this ‘process’. Kawal saw the spark: the first three killings. Purbaliyan saw more, as tractors ferrying Jats from a caste mahapanchayat were attacked.

“The committee contacted me, but the case isn’t in anybody’s hands. Riot acc­used like Kader Rana of the BSP are in the committee—so what bhaichara are they talking?” asks Ravinder of Kawal village, bristling at the suggestion of a deal. His son Gaurav was one of the two killed in Kawal. The murder was said to be linked to harassment of his sister. A bitter man, Ravinder was the unofficial VIP of the Hindu camp in 2013-14. His small home on the outskirts of Kawal was a field site for politics. “BJP leaders took me from village to village. Meetings, speeches, sympathy…they just used and abandoned me,” he says.

Kakada has its own brooding sceptics, still loyal to their hurt. Three men from the village were among those killed in Purbaliyan: among them, Jawahar’s 21-year-old son. Jaw­a­har does not want to “settle”, with one caveat. “Offers of money won’t tempt me to withdraw,” he says. “I’ll do so only if all cases against Hindus are withdrawn, esp­ecially by Kutba’s Mus­lims. I’ll do as my community says. When my son was killed, the police refused to even register a case. Only the BJP, especially (former Union minister) Sanjiv Baliyan (from Kutba-Kutbi), helped us.” 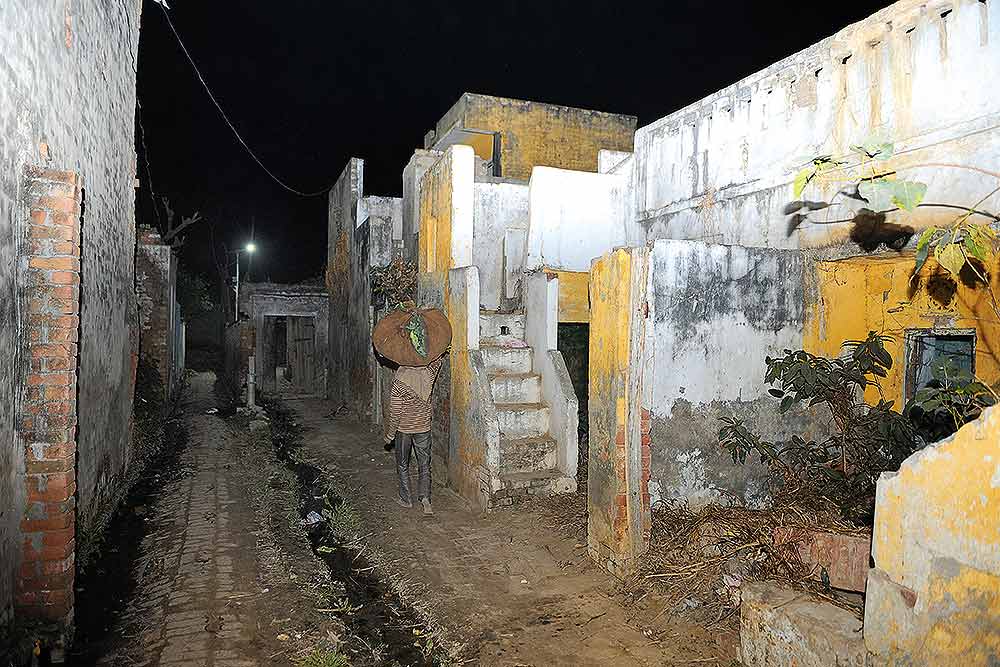 In Purbaliyan, Chaudhary Shakir, a former pradhan accused in the riots, backs reconciliation. “I keep away from the committee’s work as I’m an accused, but ever since the Ganga-Jamuni tehzeeb left this area, things have been worse,” he says. All those involved intuitively grasp that the forces which set off the fights were complex. Purbaliyan, for instance, is a village of Hindu Jats and Muslim Jats. “I am also Jat,” says Shakir. “In 2013, the Jats and Muslims here never fought. We only clashed with outsiders. Should this be called a Jat-Muslim issue at all?”

Shaukat Ali, another accused who is a milk-seller, plans to join the settlement. “The accused are feeling the pinch of pending cases. They want resolution more,” he admits. “But I go to Jat households in my village regularly, tending their cattle and buying buffaloes. It’s hard to say now why people fought in 2013.”

The core of grief is rage, that’s psychology 101. Yet, in a complex way, these offers of reconciliation, often from deeply interested parties, represent the truth that Muzaffarnagar has to heal.

By Pragya Singh in Muzaffarnagar