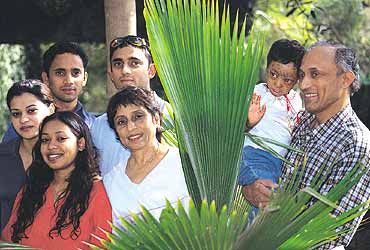 outlookindia.com
-0001-11-30T00:00:00+0553
Dr Aloma Lobo made a decision more than two decades ago when she came home with a six-month-old baby girl. She already had three sons, four-, five- and six-year-olds, at a time when words like ‘adoption’ didn’t go down too well with people, particularly when articulated with respect to a baby girl. There were the usual jibes but this only toughened Aloma’s resolve to provide the warmth of home and find a family for such infants.

Since then, the patter of many more tiny feet have been heard around her place till the time they made their way to foster homes. In the process of nurturing so many foster children, she has also turned into a walking-talking expert on adoption and counsellor for parents and kids. Her staunch belief since the beginning has been that every child needs a family, they need the emotional support and should not be just packed off to institutions that offer food and clothes.

As for prospective parents who want to adopt, she is a 24-hour helpline—right from the initial stages, the tedious process of writing application forms to when they finally take the child home. Plus, in dealing with problems while raising the child. Her efforts have also led to the first ‘how-to’ book on adoption, co-authored with Jayapriya Vasudevan. Interestingly, both are also parents who have adopted children. Dr Lobo is the chairperson of Voluntary Coordinating Agency, Karnataka (a Supreme Court-mandated organisation that facilitates adoption), while Jayapriya runs Jacaranda Press, a Bangalore-based publishing consultancy. The Penguin Guide to Adoption laces together the laws and the process in the context of a number of case histories on adopted children and the experiences of parents.

Over the years, she feels attitudes towards adoption have seen a sea-change. "In fact, there’s a waiting list now, but unfortunately it is restricted to urban areas and mostly linked to infertility," she says. The long drawn-out process (the time-frame for adoption can range from two months to a year or above) has proved a negative factor for couples keen to welcome home a foster child. "We have been requesting the government to reduce the time-frame while also retaining all the checks and balances," she says. The silver lining, though, has been the gradual surge in the number of couples who have a child but are keen to adopt another, as also single parents. In fact, now every Sunday some of her ‘children’ come visiting with their parents.

Meanwhile, another urgent concern—the unusually high number of infants discarded by parents in some areas—has prompted a research project. Aloma, a qualified doctor who’s worked on a who project in Australia, has networked with a number of adoption agencies in Karnataka to map such regions and list the reasons that force couples to abandon children. "We want to work around this depressing situation, evolve a solution to contain the number of kids landing up in orphanages," she says. The project also involves mailing questionnaires to people from all walks of life and all age-groups to gauge their awareness and attitudes to adoption.

Even with her hectic schedule, Dr Lobo still takes time out for the "new light of our life", three-year-old Niesha, a little girl visually impaired in one eye and with a genetic disorder that calls for special attention to her body temperature. So how many kids has she raised here before they found foster homes? "Oh, I haven’t kept count," she says, cuddling Niesha. But she and her family concur that "it has made a difference. It’s taught us to understand a child’s point of view". A couple of years ago, she was nurturing a girl with visual disability, a boy afflicted by cerebral palsy and another who had suffered psychological trauma. "These children regress in orphanages, nobody wants them."

Though she is past 50, she still isn’t ready to rest on her laurels. Her ‘dream project’ is still in the works—a trust for kids unlikely to find a home, like those with mental or physical disabilities or tots who have tested HIV positive. "It will be a permanent home for children who have fallen through the cracks of the system, kids who may not be adopted," she says. In a way, this will take care of them "after I am gone". To find out more about Dr Lobo’s work, contact her at Dr Aloma Lobo, Voluntary Coordinating Agency, Bangalore, Karnataka. Ph: 3331847

Down The Sleaze Street