In An Antic Land

Desai's eye for detail is meticulous, but her rich fund of humour makes her images delightfully spontaneous. The luxurious prose almost makes up for the novel's lack of emotional heft. 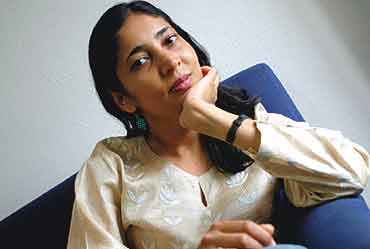 The Inheritance Of Loss
By Kiran Desai
Penguin/Viking Pages: 324; Rs 495
Kiran Desai’s delicious new novel begins with a dreamy line: All day, the colors had been those of dusk, mist moving like a water creature across the great flanks of mountains possessed of ocean shadows and depths. That dreamy hush never lifts as we drift through 300 pages of event, chronicled in prose so joyously kaleidoscopic that the story itself becomes an irritant.

There is a story though, the one everyone’s writing these days: the aching topography of exile, and the seeming impasse between the seductions of terror and those of love. You’ve read the apocrypha (Salman Rushdie) and the prole version (Zadie Smith). Here now is the Disney one.

Sai, orphaned at 13, is plucked from a chilly convent, and sent to Kalimpong to live with her grandfather, old Judge Jemubhai Patel. Pliant and numb, she warms to the strange household at Cho Oyu. Oh, Grandfather more lizard than human... thinks Sai. And Desai completes the portrait: Harking to the prehistoric, in attendance upon infinity, he resembled a creature of the Galapagos staring over the ocean.

The cook, unnamed till the bitter last when he is allowed a grudging ‘Panna Lal’, is Sai’s uneasy bridge between Cho Oyu and the Kalimpong outside. It pained Sai’s heart to see how little he had, writes Desai. But we do not feel it. ...their friendship (was) composed of shallow things conducted in a broken language for she was an English-speaker and he was a Hindi-speaker. The brokenness made it easier never to go deep. A sadly adult insularity in a lonely teenager. Sai’s other companions are a battered bunch of ageing anglophiles.

What can Sai do at 17 but fall in love? Gyan, 20 and bright as Einstein, arrives to coach Sai. With Gyan comes—treachery. Through him, the events outside, the ‘insurgency’ of the GNLF, breach the amniotic calm of Sai’s world.

Meanwhile, the novel has two other threads to pursue. The first is the tale of the cook’s son Biju, an illegal immigrant in the US. This trans-NY drift of kitchen confidential ought to have been tragic, but it stays cruelly antic even to the malicious finish, almost as if the author (echoing Sai) is punishing the cook for loving his son. The second, and best realised part of the book, is the story of Justice Jemubhai’s clenched past. It is a brilliantly imagined and stark narrative.

Most of the book is narrated from the vantage of a traveller in an antic land. (The book was first published in the US.) You saw women everywhere in nighties...a beautiful dream scene in broad daylight is the cook’s unconvincing vision of women in the ubiquitous "maxi" at the bazaar. This viewpoint allows Sai to keep Gyan’s real life and all of Kalimpong at bay. Her only reality is the numbing domesticity of Cho Oyu and its fellow fossils. As Kalimpong explodes into violence, the vantage shifts. Sai must relocate herself in this changed landscape. Now she is the outsider, the faceless "poor" belong. The denouement is stated rather than experienced. Sai’s volte face is clumsy and the story remains nascent.

Despite its lugubrious title, Inheritance...is a paean to Kalimpong. Not just the magical Kanchenjunga but the very mould on the damp clothes in Cho Oyu achieves real presence. Desai’s eye for detail is meticulous, but her rich fund of humour makes her images delightfully spontaneous. The luxurious prose almost makes up for the novel’s lack of emotional heft.

Desai’s first book arrived to global hullabaloo, and predictably, disappointed. It was charming, but evanescent, Clochemerle without teeth. Inheritance... gives freer rein to humour and is voluptuous with words. Definitely a book to hoard and cherish.

The Lion In Winter