Kim Ling’s food is reminiscent of the theme of Ghosh's Ibis trilogy, being a cultural collision of Chinese and Indian. 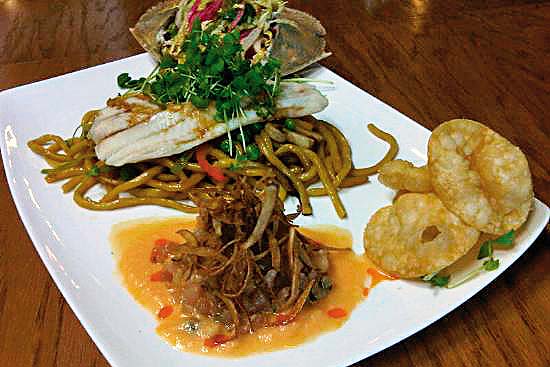 For 20 years now, one of the Financial Times’s best-read (and most imitated) columns has been Lunch with the FT, where the newspaper invites an eminent personality to any restaurant of their choice, and interviews them over a leisurely lunch. Invitees, over the years, have inclu­ded everybody, from Henry Kissinger to Angelina Jolie. One of the recent additions to this illustrious guest list was Amitav Ghosh.

Often the invitees, knowing that FT is footing the bill, suggest the most expensive restaurant in town, and the bill can go up to 500 euros (Rs 33,000). But Ghosh was much more civilised: he chose the modest, but popular, Beijing. There, the intervie­wer tells us, Ghosh ordered chic­ken-sweetcorn soup, wontons and crab claws, followed by chilli garlic mutton and steamed fish. Next time, however, we’d suggest that Ghosh try Beijing’s sister restaurant, Kim Ling, where the crab claws and the steamed fish are arguably better. But the speciality of the house is probably the steamed chicken (24 hours in the preparation). Kim Ling’s food, like Beijing’s, is reminiscent of the theme of Ghosh’s Ibis trilogy, being a cultural collision of Chinese and Indian—quite different, for example, from the pristine porcupine in turtle fat (or was it the other way around?) that Bahram Modi, the Parsi merchant, dines on in River of Smoke. But its mas­ala-fied flavours really light up Calcutta’s sensory system, as you can tell from the crowds that come here on weekends.