In A Nano Second, Good Buy To All That

His people's car is finally here, seeking to change how India drives 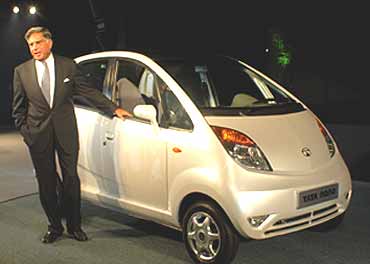 Yes, after five years of speculation and scepticism, Tata Motors’ much-awaited Rs 1 lakh car is finally here—and has the look of a serious contender in the Indian automobile space. The Nano is India’s, and the world’s, cheapest car, which meets international requirements of styling, safety and emission at a fraction of the price offered anywhere in the world. Sure, the base version of the petrol-driven Nano will retail for above Rs 1 lakh (around Rs 1.30 lakh on road in Delhi) starting September 2008. But no one is grudging Ratan Tata when he says: "A promise is a promise, and we have delivered."

The general feeling is that Nano will change the market dynamics in the small-car segment, particularly the mini or ‘A’ segment, which has the Maruti 800 as well as the Alto at present. Currently, the iconic Maruti 800 retails for slightly over Rs 2 lakh, and the Nano is significantly cheaper. At the other end of the spectrum are owners of motorcycles—seven million of them were sold last year—whom Tata is targeting. Says Yezdi Nagporewalla, national industry director, kpmg India: "A completely different segment would now be created. Every two-wheeler buyer is an aspirational four-wheeler owner. When you cut the price to this level, you are forcing the change." Also, the Tata car is sure to impact the booming second-hand car market, where prices are expected to crash significantly.