In A Deadly Maoist Trap 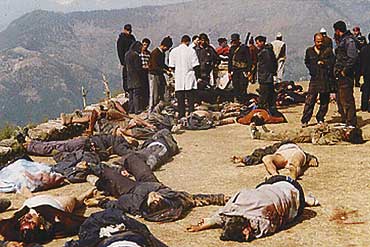 outlookindia.com
-0001-11-30T00:00:00+0553
Nepal's Maoist rebels marked the sixth anniversary of their Peoples' War this week with a wave of unprecedented violence and general strikes that have plunged this Himalayan nation into crisis and fear. In Parliament, MPs put aside fierce political differences and passed a three-month extension to the state of emergency imposed last November to help the Royal Nepal Army (rna) fight the Maoists. They had little choice. A daring and audacious raid by thousands of Maoists in the far western district of Accham early last Sunday dampened even Nepal's notorious political squabbling.

"A river of blood, gore splattered everywhere, buildings burnt for hours," this was the sight that greeted an unnamed eyewitness emerging from his hut and quoted by Radio Nepal on the day of the attacks. Around midnight on Saturday, the rebels signalled their intentions with a barrage of gunfire and explosions. They poured down from the hills into Mangelsen—district headquarters of Accham—setting fires and shooting at anything that moved. Mostly, policemen and soldiers took the brunt of the Maoists' fury. Of a 57-man rna platoon, just three soldiers survived. Almost every uniformed police officer in Mangelsen and the nearby airport of Sanfebagar was killed, including 22 constables who surrendered and were apparently summarily executed.

The rebels were frighteningly well organised, according to witnesses and government officials. They wore camouflage fatigues and had blackened their faces. They were divided into units that went about their business with fierce precision; one slaughtering the police, another engaging the army so the armoury could be looted; a third blowing up the bank and stealing 20 million Nepali rupees. "It was a well-planned massacre," says a military officer who toured the scene. "They knew what they wanted to achieve, and they achieved it."

The news hit Kathmandu like a firestorm. A once-sleepy Sunday was awash with anguish, fear and dread. Barber Shiv Thapa stopped shaving his customers and closed shop to sit in the sun and listen to Radio Nepal. "How can we work at such time?" he asked. "The country has been wounded."

But one man who couldn't afford to stop work was Prime Minister Sher Bahadur Deuba. He held a crisis session of his closest advisors, then called cabinet ministers to a meeting with security chiefs. Insiders say the politicians were shocked but angry and demanded to know what went wrong.

The answer is only beginning to emerge. The army and the government had been fearing a big Maoist attack for some time now, to mark the anniversary of the first shots in the Peoples' War. They thought it would be on a district headquarters in a remote part of the country, but when they narrowed down a list of potential targets, Accham wasn't on it. Or if it was, then the failure to reinforce the garrison in Mangelsen has proved a gaping and costly error that will carry a high political price.

The Nepali Congress party MP for Accham, Ram Bahadur Bista, was quick to blame his own prime minister and cabinet for the apparent lapse in security. "I warned them two weeks ago that the Maoists were amassing for an attack," he said. "We heard this from local people. We begged for reinforcements, 150 more soldiers with heavy weapons, but our request was ignored." There were the usual calls for the resignation of the prime minister and the home minister from a newly-unified Communist opposition—the merger of the breakaway Nepal Communist Party (Marxist-Leninist) back into the United Marxist Leninist (uml) had happened just a few days before the Accham attacks. uml MPs even scuffled and shouted down home minister Khum Bahadur Khadka when he tried to speak in Parliament on the day after the attack.

Even the rna—once regarded as a competent and sacrosanct institution that would quickly sort out the Maoist problem—came in for flak.At a midweek meeting, the parliamentary state affairs committee heard a litany of complaints about the army from MPs. Rajendra Pandey of the uml even made a scathing joke at the military's expense. "Is this an army just for malami (funerals) and salami (honour guards)?" he asked.

Other members wondered aloud if the high command wasn't more interested in Sierra Leone than western Nepal, a reference to the UN missions Nepal frequently participates in. MPs and others soon realised that they had little choice but to continue supporting the rna and the criticism quickly waned. To be fair, the army has made considerable progress against the Maoists, killing hundreds of rebel fighters, capturing many more and retrieving thousands of weapons and bombs from rebel armouries around the country. It's the most serious operation the rna has ever carried out. Military analysts say that a standing army like the rna has few immediate tactical advantages over a committed and highly-skilled guerrilla force like the Maoists.

Guerrilla insurgencies—as India knows too well—can grind on for decades however fiercely opposed by traditional fighting forces. Nepal's tortuous terrain, the lack of roads for troop transport and a shortage of aircraft are all cited as disadvantages that the rna has to overcome.

Nepal's donors are offering help. India has already given the rna two helicopters, and the Americans and British will provide logistics and training support, possibly more. "We have to defend democracy," said British foreign office minister Ben Bradshaw, who was in Kathmandu during the week on an already scheduled visit. "Nepal has but to ask and we'll give them what help we can," Bradshaw said. The 42-year-old journalist-turned-politician found himself answering some potentially embarrassing questions too. Reporters wanted to know about persistent reports that the Maoists are helped by retired British Gurkhas, a notion that may help explain their military prowess. "Not that we or anyone else is aware of," was Bradshaw's terse answer.

Officials in Kathmandu are also interested in reports in the Indian press that many of the explosives used in Accham came from fellow Maoists in Bihar, the Peoples' War Group and the Maoist Communist Centre. "We're looking into it through the embassy (in Delhi)," says a foreign ministry source.

The government—though badly shaken—is determined to press on with its anti-Maoist campaign. "We will crush them (the rebels)," said home minister Khadka, "Terrorism cannot triumph over democracy." There were rumours that the rna was launching a fresh offensive as the week drew to a close. Hot pursuit of retreating rebels after such a large-scale attack often bears fruit, according to analysts. More attention is also to be paid to intelligence-gathering, a noticeable failure in the months since peace talks between government and Maoists collapsed spectacularly last November. "We have no one inside the Maoist leadership or at the lower levels," says a retired lieutenant colonel. Insiders say successive elected governments in Kathmandu—wary of the Nepal Intelligence Directorate as a panchayat-era weapon directed at their freedom struggle—have weakened the intelligence agency with political appointments.

The most pressing question that needs to be answered at the moment—other than where the Maoists will strike next—is about the intentions of the rebel leadership. Human rights activists think the Maoists want to return to the negotiating table, and they urge the government to prepare for another round of talks, in secret if necessary. Professor Kapil Shreshta of the National Human Rights Commission thinks dialogue must restart as soon as possible. "That's why these big attacks are carried out.To strengthen their bargaining position. They felt the government didn't take them seriously in the last round of talks."

Prime Minister Deuba begs to differ. "No," says he, "they betrayed me, they betrayed Nepal. Who can trust them? First they must surrender and lay down their arms. Then we'll see about talking." It's a stance that may be justified—given the Accham massacre and many other attacks since the talks failed—but it's also a guarantee of more violence at a time when Nepal needs peace, the return of its tourists and development of its battered economy.