The SC has put brakes on the WLL juggernaut. But cellphone operators can still lose the plot.More Coverage 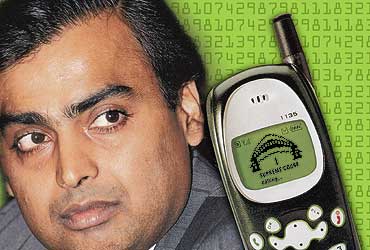 outlookindia.com
-0001-11-30T00:00:00+0553
On December 17, a bare 11 days before Reliance Infocomm's planned nationwide launch of its limited mobility phone services, a Supreme Court judgement seems to have put a spanner in the works. Or has it? Why are both the parties in the dispute, the cellular service providers and the limited mobility service providers, claiming the judgement as their victory?

But first a simple guide to the dispute for the rest of us. For whichever way it's resolved, it will have a massive impact on India's telecom industry, and also on the average phone subscriber's wallet. No one with a phone will be left untouched.

The National Telecom Policy of 1999, the last one we had, specified two types of phone services: fixed and mobile. At some point of time, several fixed service providers figured out that using a technology called wireless in local loop (WLL), your fixed phone could be turned into a mobile. That is, you could carry around a handset which you could use within the area in which this fixed phone provider was offering its services. Thus was born the concept of "limited mobility". Now, suppose a fixed phone provider wired up the entire country, you could carry your handset everywhere. This is the idea Reliance Infocomm has poured Rs 25,000 crore into in the last two years.

So why have cellular operators been crying foul? After all, why can't they look at Reliance, or Tata Teleservices, which has rolled out limited mobility WLL services a fortnight ago, as just another competitor? Because of the different government rules for the two services, which suddenly seem to be sharing the same playing field. The cellular companies paid as much as Rs 3,000 crore each to offer services in just one metro. Against this, fixed line WLL licences came for a measly Rs 495 crore. For the whole country. Cellular operators also pay—which means the customer pays—something called access charges to connect to a fixed phone network like BSNL's or MTNL's. In fact, at present, one-fifth of the total cellular billing of Rs 5,000 crore is paid to fixed phone operators as access charges. But a WLL operator does not need to pay any access charges. As a result, claim cellular operators, a WLL firm can charge lower prices for its service than anything cellular operators can ever hope to match. For example, Reliance plans to charge Rs 1.20 for an outgoing local call of three minutes, with a pulse rate of 15 seconds: that is, if you make a call that lasts less than 15 seconds, you end up paying only 10 paise. Cellular firms charge between Rs 1.50 and Rs 2 for 60 seconds, and they say they can't go any lower. The industry has invested a whopping Rs 25,000 crore in telecom infrastructure, in addition to licence fees, and has already run up, according to the Cellular Operators Association of India (COAI), losses totalling around Rs 8,000 crore.

Clearly, the WLL rates are music to consumers' ears. But cellular operators claim they could have also offered such rates if they didn't have to pay high licence fees and access charges. And that if this discrepancy isn't removed, the entire Indian cellular services industry will shut down once WLL services begin large-scale operations.

Naturally, COAI and the Association of Basic Telecom Operators (ABTO) have been scrapping over this in the courts. For, it's a matter of survival on one side and a huge market to be captured on the other.

In March this year, the Telecom Dispute Settlement Appellate Tribunal (tdsat) seemed to demolish the cellular industry's future by upholding the government order, allowing fixed service operators to offer mobile services, like the MTNL's Garuda, or the Reliance's Infocomm and Tata Teleservices's Indicom. But last week's Supreme Court judgement set aside the tdsat ruling, asking the tribunal to reconsider it.The judgement stated that tdsat had not done its job properly. For instance, the latter didn't look into key issues that related to the legality of allowing WLL services, policy and permissibility, public interest, contractual obligations, substitutability of services, cost and march of technology, violation of the trai Act and level playing field.

As expected, cellular companies are overjoyed. The COAI has always claimed that the entire process of introducing WLL services right from "DoT's reference to the trai, to the regulator's recommendation and DoT's (final) decision, was flawed and incomplete". Claims Raian Karanjawala, counsel for COAI: "The SC judgement is our victory. Our contention was that tdsat had not considered all our detailed arguments...the SC upheld this. The question of WLL policy is now wide open."

But then why is the ABTO also claiming victory with this SC judgement? The COAI was trying desperately to get a stay order on the roll-out of WLL services, and this the Supreme Court has shied away from granting. Says S.C. Khanna, secretary-general, ABTO: "Cellular operators had tried very hard to get a stay on limited mobility roll-out. They've failed." Obviously, the ABTO feels that new cheaper technology can't be curbed and the consumers should avail of cheaper services.

In fact, the ABTO feels that future events will ensure that consumers get the best deal. With the current TDSAT chairman retiring next month, it'll take several months before the contentious issues are sorted out. By then, Reliance, the Tatas and BSNL would have invested heavily in offering WLL services. According to their estimates, the customer base for WLL could soar to 3 million in the next few months. Says Graham Burke, ceo, Idea Cellular: "If TDSAT had expeditiously acted upon it in the first instant, it would not have resulted in loss of time. We hope that they now quickly adjudicate and not linger on."

Once the WLL operators manage a sizeable number of customers, it'll be difficult for anyone to simply ask them to stop their services. Even a COAI official agrees: "The new services may acquire a critical mass of subscribers, which will be difficult to fight against." So, the COAI is exploring options to get the tribunal to stay fresh WLL roll-outs. But if that doesn't happen, some sort of a compromise will need to be worked out. Already, telecom minister Pramod Mahajan has hinted that the WLL operators offering unlimited mobility may be asked to pay a higher licence fee, perhaps in the range of Rs 1,000 crore per operator.

But the cellular operators are unlikely to be happy with this arrangement. What they will insist on is that either the WLL operators pay up the kind of licence fees that they have paid, or that the government refund the balance to the cellular companies. Obviously, the WLL firms are happy with the waiting game as long as they are allowed to grab new customers.

At the moment, five companies—MTNL, BSNL, Tata Teleservices, Shyam Telecom and Himachal Futuristic—offer limited mobile services, with the Tatas being the latest entrant, and Reliance keen to launch its services by this month-end. Already, these operators have got a total subscriber base of about four lakh, with BSNL accounting for the lion's share. "We've had a good response and hope to get a critical mass in the next few months," says a senior manager in Tata Teleservices, which has already achieved a subscriber base of 4,000 in Delhi within a fortnight and plans to offer all value-added services such as sms.

So, what now? Clearly, both sides will now be in a state of nail-biting suspense till the new ruling. But if the tribunal does not rule on this fast, the ruling will have no impact on the shape of India's telecom services to come.

'India In Many Ways Is My First Home'