A new anti-pregnancy vaccine may yet be a trusted contraceptive 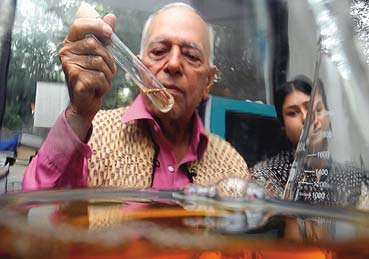 It was a pathbreaking medical project that once fell victim to its own side-effects: coming in the form of ethical doubts and partisan ire. Now, clinical tests of one of India's most ambitious and controversial vaccines to prevent pregnancy have been relaunched, with the Indian Council of Medical Research expressing interest in a new version of the vaccine. Currently, it is being tested on mice and will later be tested on women volunteers. Work on the first form of the vaccine was shelved over a decade ago because of limited success. The clinical trials in Delhi and Chandigarh had also come in for sharp criticism from women activists who alleged that those tested were not informed volunteers and that the vaccine had possible side-effects.

But it has now been revived after a genetically engineered version of the human chorionic gonadotropin (HCG) vaccine was developed last April by G.P. Talwar, director of the New Delhi-based Talwar Research Foundation. A former director of the National Institute of Immunology (NII), Talwar conceived of such a vaccine in the late 1970s and worked on it through the '80s and early '90s.

About a month back, an ICMR task force met to study the data produced by Talwar and his team from tests conducted on mice at NII. "The data showed that all the mice administered with the vaccine had produced promising levels of antibodies. We have now asked Talwar to generate more data using mice of different genetic backgrounds," Indira Nath, chairman of the ICMR task force, told Outlook.

The project also got a boost following Manmohan Singh's visit to the US in March 2005, when an Indo-American forum on contraception expressed its interest. "I had forgotten about this project," admits Talwar. "Then the Americans came asking about its progress, claiming even women there wanted such a vaccine." The project is now being supported by the central government's department of biotechnology.

The vaccine works by generating antibodies that neutralise HCG, a hormone secreted by pregnant women. HCG plays a critical role in ensuring pregnancy, as it readies the uterus for the embryo to be implanted. Devoid of the hormone, the uterus rejects the embryo, thus preventing pregnancy. However, this effect is reversible because the antibodies generated by a single dose of the vaccine lose their effect over time and allow the HCG hormone to resume its normal function. A woman who wishes to remain immune to pregnancy for longer periods would therefore need to take booster doses.

The current form of the vaccine differs from its older version in that it uses genetically engineered HCG unlike the earlier version, which used HCG purified from the urine of pregnant women. The HCG is fused with alien substances (like tetanus toxoid) that alter its properties and also act as carriers, provoking the body to create antibodies to HCG.

"The vaccine can now be industrially produced and at much cheaper rates than it could be with the earlier form," Talwar says. The vaccine in its present form will also have to be injected, but work is on to develop an alternative which can be orally consumed.

But before the vaccine reaches the market, like all drugs and vaccines, it too will have to clear several efficacy and toxicology tests. It will also have to be tested on women. Talwar declined to set a deadline to his project. "Why should I? No scientist can say when his work is going to end till it actually ends. All I can say at this stage is that the vaccine is on its way and that the progress is encouraging." This vaccine, if released to the public successfully, may have a lasting impact on the market for contraceptives. 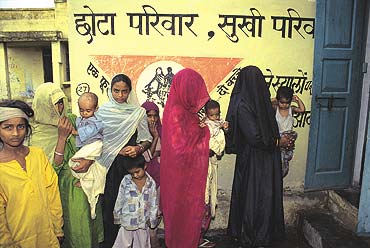 Women at a family planning centre

But not everyone is as enthusiastic about the vaccine as Talwar and his colleagues. Notes N.B. Sarojini, a health activist with Sama, a Delhi-based women's health group that is opposed to the project: "Vaccines are supposed to fight infectious diseases, not pregnancy, which is a normal function of the human body. It may also cause auto-immune disorders, like allergies or hypersensitivity. It also does not offer protection against sexually transmitted diseases."

Incidentally, the earlier form of the vaccine had its limitations since only 60 to 80 per cent of the women generated the required level of antibodies (50 nanogram/ml of blood) to prevent pregnancy. Moreover, human trials of the vaccine, conducted in aiims and Safdarjung Hospital in New Delhi and pgimer in Chandigarh, generated controversy. Talwar and his team were accused of not taking informed consent from the participants and experimenting on lactating women. Talwar says this in his defence: "These accusations have no scientific basis. Why would I use lactating women in any case? The protocol never stated we would test it on them because they do not have menstrual cycles and are naturally protected from pregnancy. As for informed consent, the whole protocol was approved by the drug controller and trials carried out in reputed institutions. And for those who would still like to see, the records are available with NII."

Talwar says the vaccine offers an "ideal" family planning tool compared to those currently in use. "People often opt for surgery (vasectomy or tubectomy) at a late stage in life after having many children. Again, intra-uterine devices often cause bleeding and that is unhealthy because most women in the country are already on the margin of anaemia. And as for steroid-based contraceptives, they stop a woman from ovulating normally," he points out. According to him, the HCG vaccine's effect can be reversed, it does not harm the normal physiology of a woman and does not demand a day-to-day intake.

However, the very search for a 'magic solution' has its critics. Says Mohan Rao, professor at Jawaharlal Nehru University's Centre for Social Medicine and Community Health and member of the National Population Commission: "There is an urgent need for health and family welfare services as acknowledged by the National Population Policy of 2000. Without meeting this existing need, to think of magic bullets is absurd. What we need is safe, effective, user-friendly and user-controlled contraception and not something which has huge potential for misuse in India's target-driven family planning programme." Clearly, from conception to consensus, the vaccine has some distance to travel.

A Few Rings Of Fury