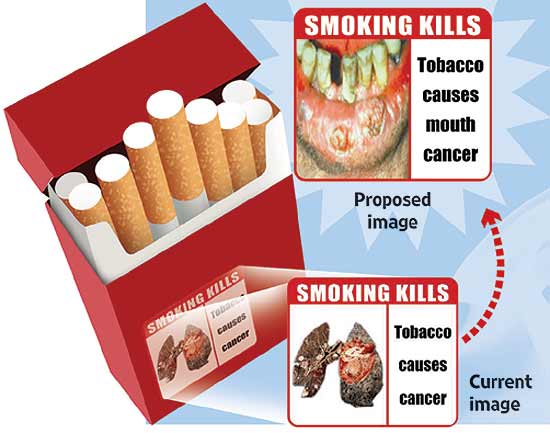 Stronger, more revulsive images, it is hoped, will discourage tobacco use even more

For years now, tobacco companies in India have been trying to throw their weight around to resist government orders to put harsh pictorial warnings against cancer and heart disease on cigarette packets. Last year, major cigarette manufacturers even shut down their units in protest when it was decided that the warnings must take effect from December 2010. But now, a Supreme Court directive passed last month has made the new, harsher warnings compulsory for tobacco products.

The court ruled that all cigarette packets manufactured in India should carry a pictorial warning covering 40 per cent of the front and a slogan saying ‘Tobacco is cancer’. The deadline is June 1. Also, the court has directed the government to ensure rotation of visuals so that the aversive effect does not wear off. In fact, the court also asked the health ministry what measures it was adopting to ensure use of pictorial warnings and for rotating them. For the problem is serious: currently, nine lakh people in India die every year of diseases related to tobacco use.

“We have been presenting examples of pictorial warnings on cigarette packets and gutka sachets to the industry for over five years now,” says a senior health ministry official. “It has come into effect but not with the force it should. We are being pressurised to tone down the pictures. The industry’s role in this has been a major hurdle. There is a clear lack of political will. If ministers and politicians having nothing to do with the health ministry sit in on tobacco meetings, how can strong warnings be pushed?”

Interestingly, the government, in its reply to a query filed under the Right to Information Act, has admitted that it is under pressure from the industry and from other vested interests. In response to a query filed by Binoy Mathew of the Voluntary Health Association of India, it conceded that the government received representations from the industry, including the Tobacco Institute of India, Zafarani Zarda and Pan Masala Association of India and the Bidi Merchants Association to defer the new pictorial health warnings.

“Union health minister Ghulam Nabi Azad had committed on several occasions, and as recently as November 9, on the floor of Parliament, that the new notified warnings would be implemented from December 1,” says Mathew. “However, this reversal in decision points to serious dereliction of duty on part of the health ministry which seems to have completely absolved itself of the responsibility of safeguarding the health of the people.”

Several countries around the world have implemented warnings and health experts say that has demonstably led to a sharp fall in tobacco use. In fact, Pakistan beat India to it by introducing pictorial warnings last year in September. It has made it mandatory for 40 per cent of all tobacco packs on both sides to carry the image of mouth cancer along with a health warning.

By 2020, tobacco will be responsible for 13 per cent of all deaths in India and studies suggest that without any intervention more than 38.4 million bidi and 13.2 million cigarette smokers may die prematurely due to this harmful habit. While a ban on smoking in public places is the only effective intervention so far by the government, other steps like ensuring no paan and cigarette shops near educational institutes have not been implemented seriously.