He appears to be the most unwanted man in Indian cricket today. A visibly distressed Mongia asks: Why? 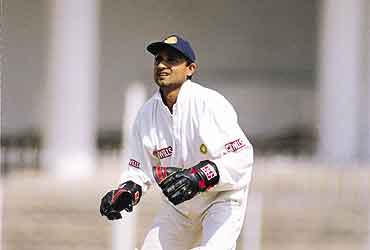 outlookindia.com
-0001-11-30T00:00:00+0553
Public memory is short, they say. No one exemplifies this more than Nayan Ramlal Mongia. He appears to be the most unwanted man in Indian cricket today. So much so that not too many, including BCCI bigwigs, want even to talk about him, let alone consider him for the national colours again. The irony is that the same set of people continue to whisper that Mongia is still the best wicketkeeper in Asia, not just India. In an exclusive interview with Haresh Pandya, a visibly distressed Mongia, unable to hide a drop of tear, asks: Why? Excerpts.

How do you feel on being overlooked by the national selectors yet again?
I feel so upset I can't even sleep properly. It certainly hurts when you aren't even among the 36 probables. I have nothing to prove to anybody. My class is there, my performance is there. I've already lost some precious years of my career for no fault of mine. It's not me saying, many discerning critics and current and ex-players, including Michael Holding, Shaun Pollock, Wasim Akram and Ravi Shastri, say that I'm still the best wicketkeeper in India.

Why do you think you are being singled out in this manner?
I don't know. Ask the selectors. Let us have an inquiry committee comprising the BCCI president, the selectors, the captain, the coach and media representatives. I am prepared to face and answer all their questions because I'm innocent and I've nothing to hide. I say telecast the whole proceedings live and let the world see. But for God's sake please tell me what's my fault, why am I being overlooked. If they say it's purely on cricketing grounds, I won't say anything. I'll start performing even better and stake my claim.

Have you tried to communicate with Jagmohan Dalmiya and Saurav Ganguly in this regard?
I wrote a letter to Mr Dalmiya on March 10, asking him to let me know what exactly is going against my selection. On April 4 he replied that it's the selectors' prerogative whom to pick and whom not to, and that he never interfered in such matters. I also sent a similar letter to Saurav by registered post. But he hasn't even acknowledged it.

It seems you're the most unwanted man in the team since your name figured in the match-fixing scandal.
I still can't comprehend why aspersions were cast on me in the first place or why my name was dragged into the controversy. I've repeatedly pledged my innocence and even the cbi has exonerated me of all charges.

How has been the support from your former India colleagues?
Players like Sachin Tendulkar, Javagal Srinath, Anil Kumble and Harbhajan Singh have openly expressed their admiration and support for me. I remember Sachin telling me, on the eve of the Ranji Trophy final between Baroda and Railways in 2001-02, that he had no problems whatsoever with me. 'If you want, I'm ready to come with you to the selectors,' he had said then.

How hopeful are you of staging a successful comeback?
I'm very optimistic. I have confidence in my ability. I've always produced consistently good performances with the gloves as well as the bat at every level. I have the utmost faith in God and I'm sure I'll regain my place.

But Parthiv Patel and Rahul Dravid have established themselves in Tests and odis respectively.
I know. I know. But that doesn't mean I should give up hope. Besides my wicketkeeping, I've often helped the side with my batting in trying circumstances and against some feared attacks. I've nothing against Parthiv or Rahul. Parthiv appears to be very talented but he has a long way to go. Rahul is only a makeshift wicketkeeper. No, I'm neither disheartened nor lacking in motivation. The fact that I have to prove my worth all over again and make a comeback is a big motivation in itself for me.