'I'm Privileged ... I've To Give Something Back'

Regardless of what the media and Congress hopefuls may have you believe, Priyanka Gandhi hardly gives the impression of someone ready to plunge into the murky world of realpolitik. 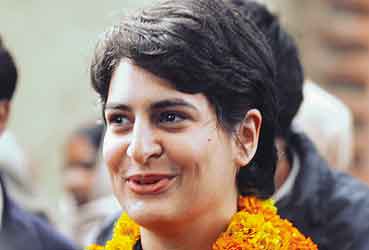 outlookindia.com
-0001-11-30T00:00:00+0553
All eyes may be set on 35, Lodhi Estate in Lutyens' Delhi. But the mood inside the Dahlia-strewn lawns, with sounds of children playing, is distinctly domestic. Regardless of what the media and Congress hopefuls may have you believe, Priyanka Gandhi hardly gives the impression of someone ready to plunge into the murky world of realpolitik.

Under normal circumstances, it would be natural for a daughter to campaign when her mother is contesting an election. But when that daughter happens to be Priyanka Gandhi, the event acquires a new meaning. Her participation becomes a projection of her own self, an exercise in providing a future line of leadership.

But all this is not new to Priyanka. She has lived through comparisons with her grandmother and the burden of being the future hope of the Congress since the day she was born. According to friends, she has charted out her own independent course, balancing her legacy and her own aspirations. Priyanka wants to continue living the way she has—making friends with the neighbours, filling school admission forms for her children and teaching them—and yet do something for the larger good. Entering politics does not seem to be an option.

Priyanka believes that her trips to Amethi, the informal interactions with the media and the self-help groups that she has set up there have led to speculations about her contesting elections. But if she were to join active politics, she says she would be more forthcoming. "Do you think I will be playing this hide and seek if I were to contest?" she asks.

What, then, is she doing touring the countryside in the Hindi heartland? If she just wants to live her own life, why does she address the press and meet Congress workers in Amethi? The answer lies in Priyanka's almost fierce desire to give something back to the country and yet live her life. "I'm privileged to be where I'm. The house that I live in is a gift from the people of this country, my children get admission in all the schools that I apply for. This is an advantage and I am very conscious of it. I've to give something back. I may do something for 50 women in Amethi or think nationally. I should have the freedom to decide," says Priyanka.

She is clearly distressed by the communalisation of the society, the hatred being spread in the name of religion and the way democratic institutions are being taken over by people with a cultural agenda. The communal carnage in Gujarat left her numb with shock. "This could not be happening in our country. What has gone wrong? All of us have to find answers," she says. But a "personality cult" cannot be an alternative to hate politics, she says. The Congress has to find an ideological answer, work with people at the grassroots, the Dalits and the tribals and rise above routine business of realpolitik.

She believes her mother has worked hard to democratise the party and has always backed leaders with a clean image. All the provincial and national leaders, whether it's Shiela Dikshit and S. M. Krishna or Jyotiraditya Scindia, are people with strong integrity. The Congress, she believes, has a lot of talent to counter the communal challenge with a definite secular and pluralistic ideology.

This then is the riddle. She believes monolithic and communal politics will not sustain in a country as varied and pluralistic as India. Yet she herself is a strong opponent of "personality cults". "Let us not pin hopes on just one person. The people of India will see through such politics and find their own answers," she says.