'I'm Not Passionate About Cars, It's Transportation'

The former MD of India's largest carmaker on his future plans, how he managed the edgy relationship between GoI and Suzuki, and working with the Japanese. 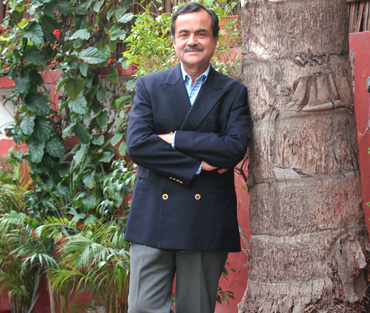 outlookindia.com
-0001-11-30T00:00:00+0553
A few days after he relinquished charge as managing director at India's largest carmaker Maruti Suzuki Ltd, a busy-as-ever Jagdish Khattar, 65, was keen to know more about office space in Noida. In a freewheeling interview with Sunit Arora, the former bureaucrat spoke on his future plans, how he managed the edgy relationship between GoI and Suzuki, and working with the Japanese. Excerpts:

When we spoke slightly over a year ago, you were all set for retirement...

Nothing has changed. I spoke one truth, and one red herring—that I would retire. I made up my mind quite some time back that I'd call it a day at Maruti when my present term ended. I started thinking of alternatives, as there are so many opportunities. Basically, I'm a bureaucrat, for whom a very good term is three years. You take any yardstick, 14 years in Maruti with over eight years as MD is quite a lot. You start feeling restless, start thinking of what new to do. I've started working on it. It will take a few weeks, then I will be able to talk about it.

What kind of role are you looking at? Will you be connected with Maruti in any way?

Maruti asked me to continue, even in some other form. I declined, because if you have to do something else, you can't have two areas of working. Unless it is an advisory role. But I don't want to be an advisor yet, so I'd rather do something else, more solid. And on my own. It's not a different role. My philosophy is that you have to be a manager, but treat it as your own company. So, if I have been an entrepreneurial manager, as some people said, why not be an entrepreneur only, for once?

Talking about your philosophy, somebody who has worked closely with you says you describe it as 'taking panga' (picking up a fight).

Taking on the system, or looking at things differently—you can call it panga, I call it being contrarian. If you do things the same way every day, you get no value addition. Think differently. You may still give it up, but often it works and something better comes out. Panga is also aggressiveness. For instance, in March 2007, when it became clear the market is going to be slow, we came up with Lalkar (an employee referral scheme) and deals for the vendors. I personally told them that we had to counter these bad times.

I'm not passionate about cars. Many people say they love cars; for me, it is transportation. In Maruti, there are people from only three disciplines—engineering, MBA and CA. I'm neither of the three, so I always start by saying, I don't know any of the three, please teach me what are the problems. That helps, because I start with a clean slate, have no baggage.

Did your being a former bureaucrat help, particularly when there was tension between the GoI and Suzuki before your appointment as managing director?

Well, it did help as I was considered a good officer. I remember T.S.R. Subramaniam (former cabinet secretary, and then chief secretary of UP) telling me when I submitted an application seeking retirement from the services that if there were to be a shortlist of three people who stand to be cabinet secretary, I would be among them. But I could see how the bureaucracy was getting politicised—in terms of caste and so on. I had said to myself then that I'm not one of these privileged people. When we joined the services, there was a premium on people who were outsiders to the system—if you were neutral, you were assigned to the best jobs.

Coming back to the mud being thrown about, it was tough. I laid low. I was a player, because when I joined Maruti in 1993, it was on the understanding that I would be successor to the then managing director (R.C. Bhargava). I'm also a great believer in the government not having any policy as such. The policy of the day depends on the philosophy, attitude, inclination of the people sitting in that chair at that moment. Remove one, the next person in the same chair would have a policy that is 180 degrees removed. And sure enough, that's what happened.

Maruti's culture was always seen as laidback. How did you tackle that?

It wasn't easy. We went through fire and hell to do it. When I joined in 1993, it was clear that big players were coming in. So, we started preparing in small ways by strengthening the network. We were an efficient, dominant player—but largely within the limits of manufacturing. If people were willing to give money and wait four months for a car, then obviously the network will get complacent. For example, before I joined, we had never appointed a new dealer, so existing dealers were complacent. There were lots of pressures. But we had to appoint dealers in the following years, so, we had an elaborate selection procedure. Of course, I was often summoned to various bhavans and asked why so-and-so is not being appointed. I'd be told, Khattar sahab, no one keeps money in the bank, it's kept in cupboards. And I'd reply, we are only going to ask the bank, not look into people's cupboards or under their mattresses.

When you took charge in 2000, it was Maruti's worst year.

In August 1999, our marketshare was down to 45 per cent. In October, I went to Japan and gave a presentation to Osamu Suzuki (Suzuki's chairman). And he said, "Khattar San, 45 per cent marketshare very unreal; you should be ready for 30 per cent." Now, he says we'll never allow it to go below 50 per cent. That was followed by the strike (by Maruti's employees, in September 2000), which was a test for us. If we had given in, we wouldn't have survived more than a couple of years. Then, we came up with Project Vistaar—insurance, True Value, accessories, finance—which helped retain customers. My emphasis has always been on service. That's when competitors came and our customers began deserting us, because they had choice. Focus on service is going to help Maruti, but it is going to take a couple of years.

You played an active role during Maruti's IPO roadshows in 2003.

Initially, I used to tell (investors) I've come here for the credibility of my company etc. When I left, I would say, 'Look gentlemen, I'm going with one request: whether you invest or not is your decision. But if you decide to invest, then you must come on the first day. Don't watch others. And I can tell you, that if you invest and come later, when we meet next time, I'll treat you differently than those who came on the first day.' Everyone said it wouldn't be subscribed—isn't that panga?

Maruti has huge investment plans, to enhance capacities and become the global production hub of the new A-Star. How did you manage to overcome the dissonance with Suzuki, whose worldview was very different?

Yes. Over the last six years, look at the annual company slogan Suzuki used to send all their overseas companies: 'work hard for survival', 'the next leap', basically centred around survival and competition. I told them, this is not relevant for India. Our question is not survival, it's leadership; can we have a slogan for leadership? And the Japanese would say, sir, this is corporate policy, it has to be followed. We followed—of course, in my communication, it was all about leadership. Suzuki's whole thing was that the automobile industry had gone through bad times. But India was different.

So, you must have faced resistance.

Oh yes, throughout. There's always resistance between a subsidiary company and the principal. Of course, it's not only the Japanese, it happens within Maruti too. Initially, the impression about Maruti in Japan was like any typical Indian company. Now they're taking it seriously, in terms of R&D and training. They were surprised we were so good, they said go ahead and do it. This is a peculiar company: it's only in Maruti that we are seeing a mix of Japanese processes and local practices. You are getting the best of both worlds.