‘I’m Not Against Mining, Big Projects, But Displacement Should Be Minimal’ 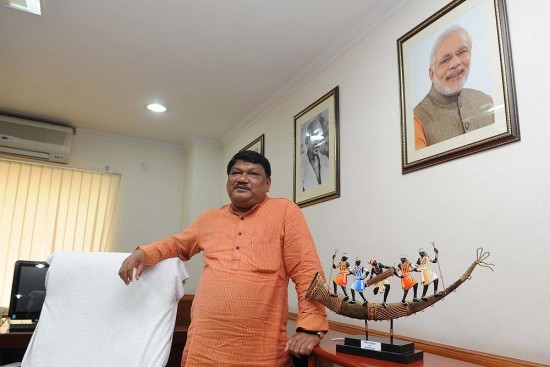 Union tribal affairs minister Jual Oram, 54, calls himself an accidental politician. Of late, he has been engaged in a very public turf war with Union environment minister Prakash Jav­adekar on easing the rules for having large-scale industrial projects in tribal areas. For the moment, the law ministry has backed Oram on the Forest Rights Act, saying that only the tribal affairs ministry can make changes to affect development in tribal areas. On the eve of the monsoon session of Parliament, the four-time MP from Sundargarh in Orissa tells Bula Devi that he is in favour of mining and big industrial groups setting up shop in tribal areas. He says he batted for the land acquisition bill. Excerpts from an interview:

Are you in favour of mining and big corporates setting up industrial projects in tribal areas?

I am not against big projects or mining. Shying away from mining to extract minerals and leaving rich minerals under the soil unutilised is not good for the country. However, there should be minimum displacement of tribals. But displacement-related issues are add­ressed in the Land Acquisition Bill, which is being looked into by a joint committee of Parliament.

How committed are you to giving tribals consent rights under the Land Acquisition Bill?

The bill has created a lot of doubts in the minds of the people and it is being interpreted by people according to those doubts. In the bill, whatever relaxation the government has given, it is for the benefit of tribals—whether it is for roads, railways, hospitals, educational institutions, irrigation canals, towers. These are all for the benefit of tribals. Displaced persons will get four times the compensation; displaced persons will mostly be from tribal areas. As far as consent rights go, it...